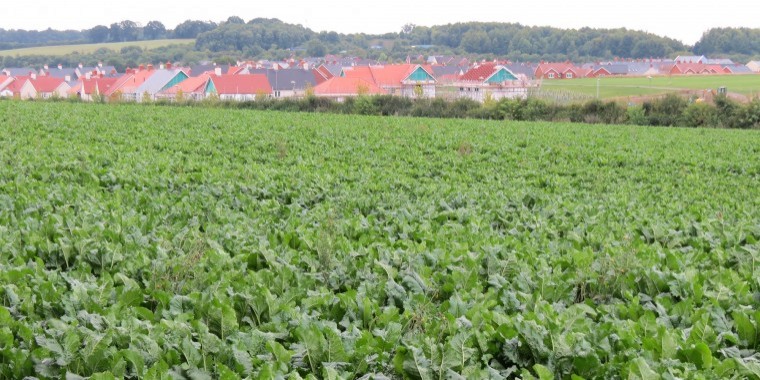 At Apsley Farms in Hampshire, 30 people – including engineers, electricians and designers – are employed on one of the biggest anaerobic digestion (AD) projects in Europe. Fifteen are employed full time and 15 are contract staff to keep the whole operation running round the clock. The site produces a small amount of electricity, some of which is used to power the three AD plants. Any heat generated is used in the farmhouse and outbuildings. But by far the biggest product is biogas, and now the project’s owner, Henry du Val de Beaulieu, is building a giant fourth bio digester tank which will be ready by Christmas.

Henry du Val de Beaulieu was 30 when he began to run Apsley Farms near Andover in Hampshire.

His great grandfather bought the estate in 1936. He had an only daughter who married a Belgian with an estate of his own. They had Mr du Val’s mother, an only child, and she inherited both estates. “I grew up in England and Belgium, and was born in Winchester,” said Mr du Val. “He served for a short time in the Royal Green Jackets and spent part of his twenties helping to manage the Belgian estate and developing property in London.

He took over the running of Apsley Farms in 1991 as his mother’s employee. Mr du Val did have some farming experience: in 1978, he had been a farm worker in Leicestershire and was at Cirencester agricultural college from 1979 until 1981. “I spent a lot of my time there not doing what I should have been doing. In retrospect I wish I had taken it more seriously.”

When it came to the challenge of taking over the estate, Mr du Val felt well prepared. “Ultimately, it is all about balance sheets and accounting and I had been doing that for years in other businesses. It is also imagining that you know nothing and employing people around you who can advise you correctly.”

The farm produced wheat, malting barley and oilseed rape interspersed with beans, linseed and other crops. “It was the usual thing of something doing well so you tried it and something else didn’t do so well so you got out of it. Break crops are always a nightmare because they’re never that profitable. But sometimes you hit it lucky.”

In 1997, he was granted a farm business tenancy of the land and created a 50/50 partnership with his wife Deborah called Apsley Farms, and the farm has been run under this arrangement since.

From 1997 until the late 2000s, the farming operation grew from about 1,000 acres to about 5,000 acres by renting other land and making contract farming agreements. “Towards the end of the noughties, we reduced our farm back down to 1,000 acres because we felt we were not making any money. It was then we started looking round to see what else we could do.”

Pictured: Sugar beet growing on the edge of Andover is one of the feedstocks for the AD project. Here, it can produce an astonishing 30 tonnes an acre