» Almost all the pig is used 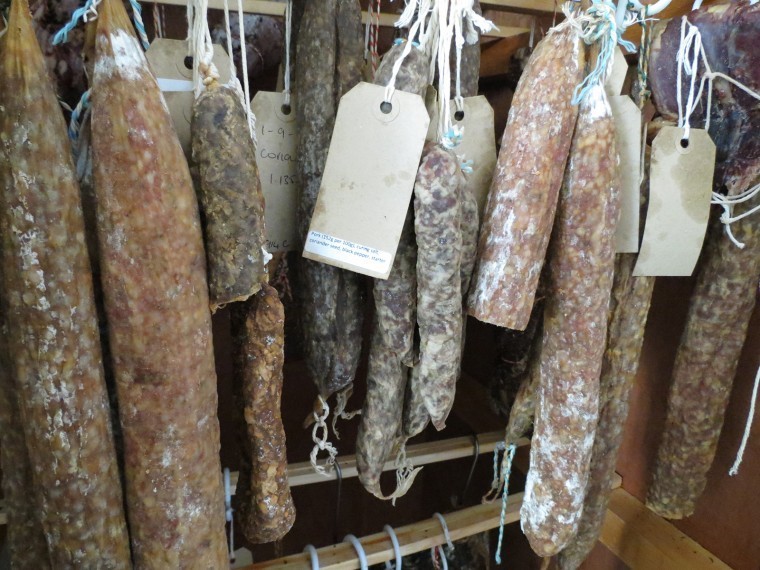 Pigs used for the charcuterie are bred on a nearby Hampshire farm and delivered to the Mills as weaners.

They are Gloucester Old Spot crossed Saddlebacks which are taken through to the stage when they are ready for charcuterie. “That is an older pig with a different sort of fat to that found in normal supermarket pork fat and skin,” John Mills said. “A slow maturing, traditional breed does not put on a lot of weight unless you stuff lots of food into it and it’s necessary to put the flavours into the meat.”

Even though the pigs are old enough, the Mills won’t select them until they are certain they are the right size. “We never leave one pig on its own. We always take them so that there are two pigs left at the last stage and then we start again. That prevents any stress. If you have a stressed pig, you have horrible meat – and the same goes for the cattle, too.”

Mr Mills takes them to a Hampshire slaughterhouse and brings them back in a chiller van: the beef cattle are returned by the slaughterhouse. Beef is hung for three weeks in the farm’s chiller, where the pork is also hung. In the week the pork is hung, a butcher comes to cut up the carcase in the farm’s butchery and remove the muscles. The pig is frozen and everything going into the salami is minced. The muscles are set aside for the dried pork or hams. “We produce all our own bacon with rosemary,” said Mr Mills. “That is dry cured so that if you cook it, you will get no water out of it because no water is added. You will get proper, traditional bacon.”

Nearly the whole pig is used on the farm. The offal goes for black pudding and other products; the head often goes to people who know how to use it or for rendering.

Beef muscles can be cured in the same way as pig muscles, and a silverside muscle, for example, can be used for a dried meat with the flavourings around the outside. “There would be very little of it but it would go on a charcuterie plate with some salami slices, a few bits of dried meats and some biscuits and cheese as a platter which works well with a glass of wine in the evening. We try to match some of the meats to wines: one of our dried meats has orange zest on it with juniper which works well with a tawny port. The flavours are very good.”

Salami is pork which has been minced and the flavours are mixed in. The muscles go into a bag with their flavours for about three weeks before they are taken out and dried so the flavours are infused into the edge of the meat. “The larger the salamis are, the longer they take to dry. We do some finger or snacking ones which take about a week to dry.”

Read more about the farm visit