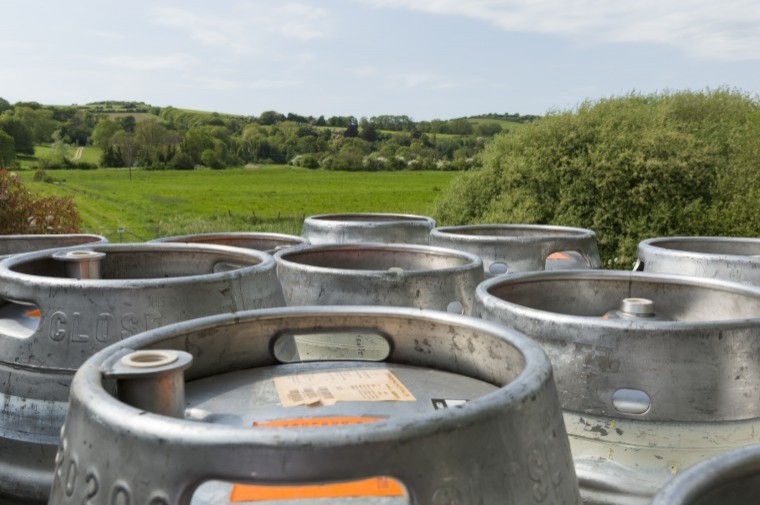 Raising a pint of Long Man Brewery’s best bitter to the newly married Duke and Duchess of Sussex on 19 May 2018 could not have been more apt. Not only is the traditional bitter produced at Church Farm in Litlington, East Sussex from the farm’s own malting barley and from Sussex grown hops, it was at the last Royal wedding celebrations that the idea for the on-farm brewery began.

In May 2011, Duncan Ellis owner of Church Farm got talking about farm diversification with Steve Lees, commercial director of Eastbourne-based drinks wholesaler HT White, who suggested that the third-generation farmer should consider opening a brewery to add value to the farm’s malting barley.

“We had already started to diversify the estate and have some DIY livery here,” said Duncan Ellis. “I was chatting to Steve over a beer at the Royal wedding celebrations and was aware of his wholesale business, so when he asked me if I would be interested in brewing beer it was an opportunity we just had to go for.”
While Duncan had already received a lot of interest from people wanting to convert the farm buildings into housing and office spaces, establishing the brewery provided an opportunity to preserve the farm’s heritage and to restore its historic purpose, with records showing that there had been a brewery on site in the 1500s.

In April 2012, less than a year after the initial conversations, Long Man Brewery’s head of production, Jamie Simm embarked on the first brew in the converted flint barn, which had once been used by Duncan’s grandfather to rear calves.

Six very successful years on and the quality and consistency of the beer, combined with Steve’s connections providing a route to market, has driven the brewery from strength to strength.

“In 2012, there were just three fermentation tanks, the office was built into the back corner of the brewery and racking also took place in here,” said Tom O’Neill who joined Long Man in 2015 as head of sales and marketing to help the team cope with the drastically growing demand. “The brewery has been quick to reinvest in more facilities. As we have expanded, the site now stretches over both sides of the road with a separate office unit, two purpose built cold stores and five fermenters have been added to keep up with customer demand.”

The brewery, a bespoke build with a functional set-up designed by Vincent Johnson who has constructed microbreweries across the country, benefitted from a £50,000 LEADER grant and its growth and success has provided a real return on investment for the government, who now receive around £50,000 per month in alcohol duty tax.
“When we put the grant application in it was received on the basis that we would be providing two full time jobs over two years,” said Duncan. “As we have grown the team has grown too. Day to day I manage the farm and part of diversifying is being able to put a good team of people around you.”

Long Man now employs 14 members of staff and, through further investment, the 20-barrel facility is capable of brewing up to eight times per week, producing 2.4 million pints per year.

Quality and consistency
With the farm remaining at the heart of production, Jamie Simm believes that being able to see the whole process from growing the barley through to producing the beers creates a superior level of control which most other breweries don’t have access to.

“I can go and see the barley and Duncan explains what we are looking at,” said Jamie Simm head of production at Long Man Brewery. “This absolutely has an impact on quality and the whole culture surrounding our product is fantastic. There is a provenance and now we have been going for six years, hopefully our customers know what they are getting when they drink one of our beers.”

Focused not on trying to reinvent the wheel, but creating traditional styled recipes with balance and uncompromising consistency, Jamie and head brewer Gary Brandon deliver an award-winning range of core and small batch brews, with 80% going into cask and 20% into keg and bottles.

Last year, Long Man’s Old Man was chosen as the world’s best dark mild in the World Beer Awards, a rigorous blind tasting of thousands of entries received from over 85 countries.

“After the World Beer Award, I received a phone call from the head brewer at Harvey’s of Lewes congratulating the team,” said Jamie. “As well as being great from a marketing point of view the award has been great for morale. We work really hard to get the consistency and the team are able to see the fruits of their labour.”

Today, Long Man Brewery’s award-winning beers are sold nationwide, with around 60% being distributed via wholesale LWC who have 15 national depots with next day deliveries to 90% of the UK.

“When Steve sold HT White to LWC he made sure that we would have a secure route to market,” said Tom. “We sell a small amount direct but LWC are incredibly important to us because they have the transport and logistics infrastructure in place. We have two transit vans and a smaller van which are filled most days, but if all our business was direct we would need several HGVs and 10 transit vans at which point it becomes an entirely different business model and not one we are geared up for.”

While the wholesale route to market works ideally for the brewery, they are still focused on supplying the independent free trade, with beer destined for bars in free house pubs up and down the country.

“We are served in a lot of rural pubs and that is where a lot of farmers are drinking,” said Duncan. “That has opened up new opportunities with Haynes and New Holland who are keen to promote our story and the fact that all the beer has been through their combine. We have worked with them on a collaborative brand video and have produced a gift pack with our beers which they can give to customers.”

After harvest, the malting barley grown at Church Farm is sold to Warminster Maltings, one of the oldest maltsters in the country, via local grain merchants Robin Appel, where it is processed, with crushed malt sent back ready for use.

“We sell a lot of barley to Warminster and have around 150 tonnes back per year,” said Duncan. “The next move for the brewery is to start buying the malt in bulk. We have invested in a new store and we want to be able to utilise that space. There is definitely scope here for further expansion too, to making the link between the farm and the product much closer, and one day I would love to be able to have the malting process done on site.”

For each brew, around half a tonne of malt is placed into the hopper which is fed by an auger into the mash tun. It is then mixed with liquor (the brewer’s name for water used to produce beer) at around 65 degrees to start releasing the sugars from the barley, creating the wort, which form the basis for all the beer.
From the mash tun, wort is transferred into a copper where it is boiled with more liquor for around one hour. During this process, hops are added at various stages for flavour, bitterness and aroma.

“We use Charles Farham for all our hops and depending on the beer some of those are sourced locally,” said Tom. “Our Sussex Best Bitter and Old Man are made with Sussex hops from AH Hoad and Son and T Hollamby and Son, with Kent hops from CA Fountain, Rickard Farms, CJ Lillywhite, Hoads Farm and Oncoland.”

In the final stages, the brew is transferred from the copper to the fermentation tanks, using a heat exchange which reduces the temperature from 100 degrees to 18 degrees, before being left to ferment for five to seven days. After fermentation, it is then transferred into cask, keg or bottles.

Sustainability
As well as focusing on the grain to glass concept, there is great emphasis on sustainability. All the spent grain is used as feed for the farm’s herd of cows and Duncan has made many improvements on the farm including moving over to a no till system.

“As well as saving on diesel and labour costs, the benefits in terms of soil health and biodiversity are beginning to be seen and it is another good story we can tell our customers,” said Duncan.

Back in the brewery, two hot liquor tanks which heat the water used for brewing are powered by over 100 solar panels, which were installed around five years ago. The cold liquor tank is located on the land with chalk filtered water being sourced directly from the aquifer.

“We have a system in place where the water is UV and charcoal filtered before being pumped to the brewery,” said Tom. “For every pint of beer we produce, seven pints of water are used in processing, cleaning and loss so we have also installed a water treatment system at the back of the brewery. Waste water can be used to irrigate the fields and the site where the brewery water comes out produces some of our best quality crops.”

Firmly on the map

Looking towards the future, Long Man Brewery is fortunate to have plenty of redundant farm buildings to provide expansion opportunities if needed and currently work is underway transforming an old cart lodge into a visitor centre.

“We are right on the South Downs Way and are hoping that a lot of people will be able to come and see what we are all about,” said Duncan. “I want the space to help educate more people about the link between agriculture and beer and I am hoping to have an interactive screen which will link to farm life, showing where the barley is grown.”

The visitor centre, which aims to be open by late 2018 is set to put one of Sussex’s largest independent breweries firmly on the map.