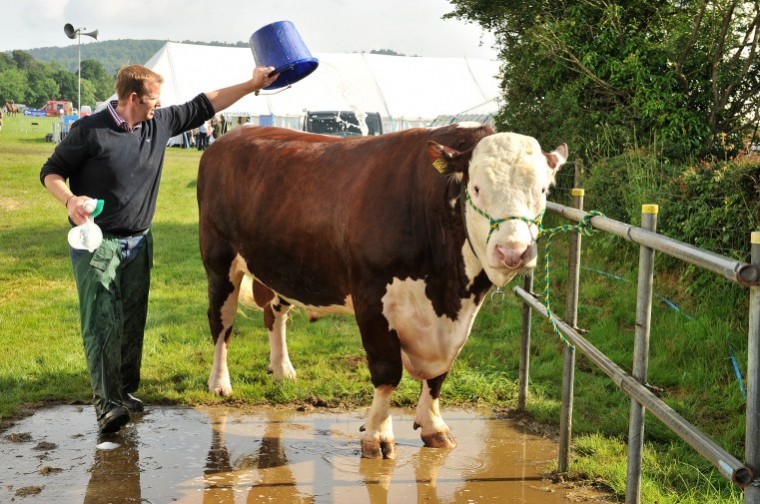 It was fantastic to see so many of the younger generation, from a three year old with a lamb to two teenagers showing their homebred bulls, already bitten by the bug of livestock showing, learning how to present their animals in immaculate condition and control them in the ring. They are the future of shows like Cranleigh.

The weather was kind, with even some sunshine! Agricultural machinery the size of a house, machinery for children to sit on and dream, and beautiful animals to meet. Did toddler Courtney Harris Mayer mind the piggy snuffling at her pushchair – no, she was delighted!

“It was a good show,” said chairman Will Elliott. “We had particularly strong sheep entries and the horse show was very well supported. We had a good crowd, it was lovely to see the display of farming machinery since the war and we were pleased with the decision to move to a June date.”

Extraordinary pyrotechnic aerobatics in the main arena saw motorcyclists from Moto-Stunts International hurling themselves through a wall of fire. And in complete contrast, the Concours d’Elegance turned the arena into a serene and colourful pageant of historically clad side saddle riders. Stealing the show, and the championship, was 11 year old Kate Hewson from Kingston wearing Balmoral tartan and riding the impeccably behaved Dartmoor pony New Oak Jester. She had only been learning side saddle technique since October but her riding was flawless and she was in perfect confident control surrounded by much bigger horses. Cyril the Squirrel and his racing Terriers proved a hit with the crowds.

The highlight of the show was the livestock parade, demonstrating the commitment of our farmers in terms of time, form filling, patience, money and energy. The beef championship went to K Hasemore and S A Cobden’s magnificent Hereford bull Auckvale Juggler from Snodland, Kent. Reserve was Mike Hind’s Simmental heifer in calf, Ravensdale Goldie 12th from Mayfield, East Sussex. His cow won reserve last year, and he produced champions in the preceding shows – a wonderfully consistent performance.

Champion young lamb handler aged eight to 13 was Cameron Clark aged eight, from Tilford with a Zwartbles ram lamb. He was reserve last year. His family won the any continental pure breed championship with a Zwartbles shearling ram. Carly Hughes, three, from Essex won the under eights class with a Coloured Ryeland.

Holly Richardson from West Hoathly continued her amazing winning streak clinching champion junior stockman. She had just won at Surrey County Show and Heathfield and was reserve at the South of England Show at Ardingly. And of course she won here at Cranleigh last year.