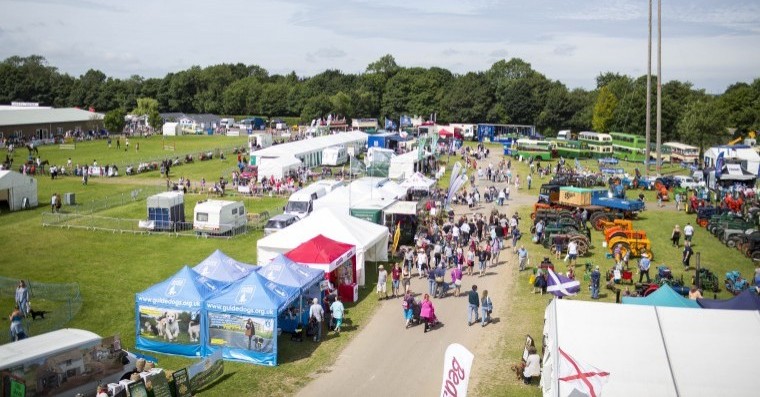 Lucy Hegarty, show manager said: “We knew that it was going to be a great attendance number from the amount of cars in the car parks. Once the gate numbers, online ticket sales, members, exhibitors, competitors, onsite services and volunteer tickets had been tallied we were able to confirm the increased footfall.”

The Kent County Show were delighted that their Patron, HRH The Duke of Kent, KG attended on Friday 8th July. The Duke of Kent who became Patron of the Kent County Agricultural Society in 1975 has been a firm supporter over the decades, attending the Show on numerous occasions. This year he took particular interest in the livestock and the young farmers who compete over three days.

HRH The Duke of Kent was guest of honour at the president’s lunch sponsored by Brachers LLP and Savills, where he commented that he had once again ‘had a great time’ at the Kent County Show.

The Kent County Agricultural Society, organisers of the show were delighted to have the EU Commissioner for Agriculture and Rural Development Phil Hogan at the show this year. His visit marked the first public engagement between the EU Commission and the British public since the decision to leave the EU so was a really important moment to offer clarification after the recent events and address some of the uncertainties of the rural and farming communities.

Commissioner Hogan, CLA deputy president Tim Breitmeyer and NFU president Muerig Raymond all gave speeches while the Commissioner stayed for a Q and A session with a large group of farmers and growers.

Headlining the entertainment this year were The Bolddog Lings FX Motorcycle display team. Their heart-stopping display proved to be very popular in the main ring with full grandstands for the displays that took place twice each day.

Livestock entries saw an increase in 2016 and this ensured that visitors were able to see more competitions and enjoy a larger number of animals, particularly in the sheep area. Supreme Champion Cattle was presented to Designer Holsteins and the Supreme Sheep Champion was D Knowles & D Brown.

Lucy Hegarty, show manager explained: “The increased livestock entries, good Show weather, wonderful displays and demonstrations gave this year’s Show a really vibrant atmosphere and we were also delighted to report, in spite of increased numbers, no problems with the traffic flow and car parking.”

The Kent County Show can also report a huge number of traffic via digital and social media preceding and during the Show, with web traffic reaching quarter of a million page views in the month leading up to the Show. Facebook proved popular with the show reaching 57,000 post engagements over the past 28 days. Twitter also proved popular with over 9,000 followers and almost 1,300 mentions during the three days. Most popular was the Royal Visit, animals and the wonderful Poultry Show where newly hatched chicks and ducklings captivated visitors and followers.

Kevin Attwood, chairman said: “We are thrilled with this year’s show, the showground looked wonderful, visitors were happy and the mostly dry weather helped to swell visitor numbers. We are slowly increasing attendance year on year which is an indication that the wider community are behind the agricultural and rural sector. We also need to thank our sponsors, stewards, volunteers and service providers, who all work together to make sure our visitors have the best experience possible. We are grateful that we have such a professional and dedicated team.”

Principal sponsor Hadlow College won an award for the Best Agricultural Trade Stand with their interactive marquee as well as taking part in floral art and sheep shearing displays. Elsewhere on the showground, many stands provided entertaining, educational and interactive stands that gave members of the public a chance to engage with a wide variety of activities.