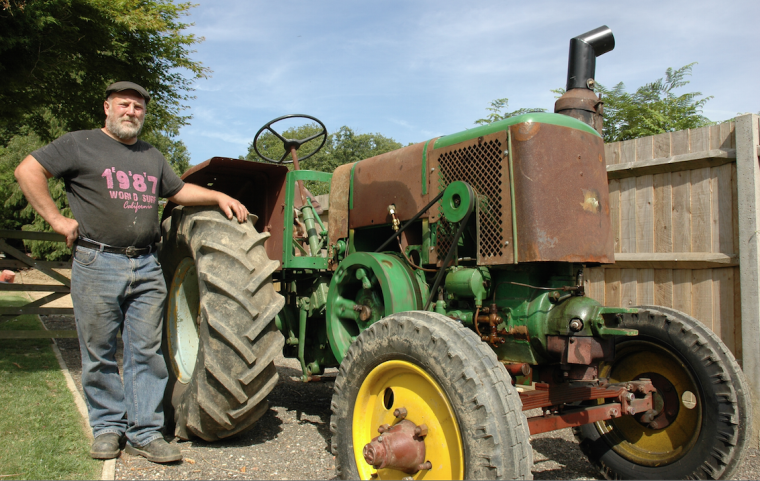 The number of stalls and attractions has risen to over 130, even more making the event – to be held on 22 and 23 August – a great draw for families.

In addition to the stalls and attractions, about 100 tractors are expected to be shown along with 65 classic cars, 25 historic motorcycles, over 30 stationary engines and some 50 examples of special interest horticultural machinery.

Staged at Beech Lane Field, Sissinghurst Road, Biddenden, the Tractorfest will showcase rural activities, and organisations and businesses based in and around Biddenden.

In preparation for the show, Richard Lofting is coaxing back to health a ‘creature’ which has lived in his shed since March.

The ‘creature’ is a rare historic French hot bulb 2-stroke tractor – built by Société Françoise Vierzon and rescued five months ago from Belgium – which he will be showing at the fair.

Though undoubtedly a no-nonsense engineer, he has a soft spot for ageing tractors and is co-ordinating the tractor element of the event.

“Older tractors have a lot of personality and are like living creatures,” comments Richard who lives at Sellindge.

His project vehicle will be among some 70 vintage and special interest tractors at Tractorfest which, he says, is a perfect event for a family day out.

“Everyone likes a bit of nostalgia so the presentation of the tractors along with many classic cars and vintage motorcycles will be a big hit. The country fair atmosphere can be enjoyed by all.”

The Biddenden Tractorfest and Country Fair will be even bigger and better this year.

Staged at Beech Lane Field, Sissinghurst Road, Biddenden, it will showcase rural activities, and organisations and businesses based in and around Biddenden.

In addition to the tractors old and new and the classic cars, shown will be stationary engines, farming implements and machinery from bygone times.

Other highlights will include the Hurst Green Shires, a sheep shearing demonstration, terrier racing, a miniature railway, pony rides, Magic Martin, a circus workshop and the Wiggly Worm Show.

As well as vehicle parades, the arena programmes will feature dog obedience and agility, Morris dancing, birds of prey, and a dog herding ducks.

Elsewhere there will be demonstrations of wool spinning, wood turning, basketry and trug making.

Visitors will be able to try archery and opt for an overview of the countryside with a helicopter flight.

The event will also feature a large collection of rural craft, food and catering stalls.

Profits from the Biddenden Tractorfest and Country Fair will be used to support local organisations and charities. Biddenden Entertainment and Social Team (BEST), the event organiser, is grateful to Michael Palmer for the use of the site, and to Biddenden Parish Council and Ashford Borough Council for their support.

BEST is working with PRS for Music which licenses the use of copyright music across the UK, giving businesses and organisations the legal permission they need to play music. The licensing ensures that music publishers, songwriters and composers are fairly rewarded with royalties.