The Role of Agriculture in Healing Society - South East Farmer 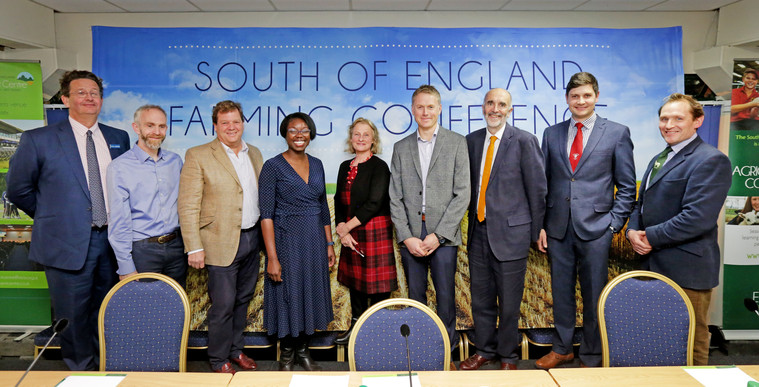 While the society took the opportunity to hold an in-person event, attracting a healthy crowd to its showground home at Ardingly, it also live-streamed the event online, with the result that the hybrid conference brought together more than 250 farmers, landowners, agriculturalists and industry representatives from across the South East.

The conference, backed by media sponsor South East Farmer, addressed The Role of Agriculture in Healing Society, a topic that had considerable relevance after 18 months in which many people ‘discovered’ the countryside as an escape during lockdown.

The question of access prompted conference chair Anna Hill, presenter of BBC Radio 4’s Farming Today programme to ask both delegates and the audience, towards the end of the evening, if they thought farmers should be paid for allowing people on to their land for wellbeing purposes.

It prompted a handful of horror stories from those who had experienced problems caused by inconsiderate ‘townies’ accessing their land, particularly where dogs and sheep came together, and while no formal vote was taken there was a general view that allowing farm access should be subsidised.

Robin Hobson, Chairman of Laurence Gould Partnership, also focused on the therapeutic effects of social and care farming and the positive effect it can have on the health and wellbeing of people from all walks of life.

He said ‘care farms’ that welcomed visitors to their land could help a range of people, from veterans and the homeless to school children, but warned that not everyone was suited to opening up their farm and welcoming visitors looking to reconnect with nature and the land.

In that case, he said, farmers should stick to the day job and ask someone else to work with the charity on their behalf, allowing their land to be used to help other people but without day-to-day involvement. “You can teach a turkey to climb a tree, but it’s a lot easier to hire a squirrel,” he quipped

Introduced by Society Chairman Charlie Burgoyne, Anna Hill pointed out that many people had discovered the countryside since lockdown and said that the pandemic had helped establish stronger links between farmers and local people.

Barbara Bray, a former food safety and nutrition consultant who “decided I wanted to help people eat better” and so applied for a Nuffield farming scholarship so that she could study the subject, said the challenge was to the tackle all aspects of the food journey, from growing it and marketing it to teaching people to cook it properly and reducing wastage.

She referred to the “triple burden of malnutrition” – micronutrient deficiency along with overweight and underweight issues – and said the problems had been exacerbated by Covid-19 and inequality. As well as growing the right crops, she said the country should be looking at the importance of micronutrients and should consider enriching foods, citing omega 3-enriched eggs as an example.

Pointing out that healthy diets tended to be unaffordable for many people, Barbara said the publication of the national food strategy could make a difference but would mean departments working together – as well as an injection of cash from the Treasury.

Sir Charles used the conference to explain the rewilding project he has been undertaking at the Knepp Estate. As well as helping to bring rarities such as the white stork back to the UK, Sir Charles has also seen an influx of two-legged animals, with the 50,000 nature enthusiasts who flocked to Knepp to see the first of these fascinating birds ensuring that tourism is now a mainstay of the business.

The rewilding at Knepp involved introducing a range of animals that all served a different purpose to help the natural habitat, he explained, while also highlighting the need to restore soils to a healthy state and farm regeneratively. Sir Charles also stressed the importance of working collaboratively with others to help restore the landscape and rebuild the ecosystem.

Regenerative agriculture was also the focus of Dan Burdett, who discussed not just the concept but its role in helping to heal society. Another Nuffield scholar, he explained that the regenerative concept went beyond simply improving the soil but could also have an impact on mental health and rebuilding communities. He said one definition suggested it could encourage continuous innovation and improve “environmental, social and economic measures”.

Moving on to the practical question of how it could create more sustainable supply chains, Dan highlighted issues including global logistics, the carbon neutral challenge, Brexit and Covid-19 and said that regenerative farming could help in every case not just by improving the soil but by bringing the producer closer to the consumer.

Following the presentations, the panel tackled a series of questions on topics such as the nutritional effect of food storage, the countryside code and, in an interesting twist on the conference title, whether or not society had a role in healing agriculture.