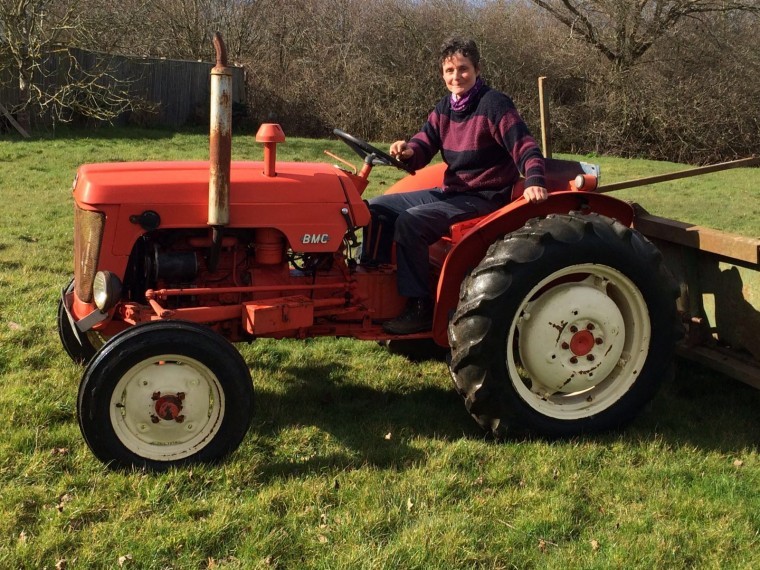 Sue Boon, who heads the group of volunteers in the Biddenden Entertainment and Social Team (BEST) which runs the two-day event, said: “We decided to buy a small tractor, ideally a BMC Mini that is similar in shape to the drawing of a tractor which is our logo.

“Many hours were spent trawling through tractor magazines, searching on eBay and checking out numerous websites. We also visited local tractor dealers but all our efforts were in vain – there wasn’t a BMC Mini to be found.”

However, the idea was not shelved and the searching had resulted in the discovery of the next best type of tractor, a smallish McCormick located at the village of Noke in Oxfordshire.
So Sue and fellow tractor enthusiast Chris Thomas travelled to Noke, inspected the tractor, liked it and made the purchase. They loaded the McCormick onto a trailer and Chris asked the seller if he had any tractor parts which might be of interest. After half an hour of discussion, Sue and Chris decided there was nothing they wanted at which point the seller, whose name was Dan, just happened to mention he was keeping, for a friend, a BMC Mini.

The BMC Mini started easily despite not having been run for 18 months and a price negotiation began with the owner – the result being that the Biddenden Tractorfest and Country Fair volunteers bought a second tractor.

“The BMC Mini is perfect for us and will be taken round the area promoting Tractorfest,” Sue said.

“We would be prepared to sell the McCormick,” Sue added, “provided it was bought be someone who would give it a good home.”

The fourth Biddenden Tractorfest and Country Fair being held at Beech Lane Field, Biddenden, Kent TN27 8EX on 20 and 21 August (10am to 5pm on both days) will certainly be bigger and better than ever.

The event is an affordable and fun day out for all the family, with something to please everyone: more than 100 tractors from vintage machines to modern models, classic cars and motorcycles, clay shooting, food and drink, birds of prey, alpacas, Morris men, craft stalls and demonstrations, archery, a ukulele group, Shire horses, and miniature steam engines, horticultural machinery, stationary engines and a fun fair.

There will be a full programme of arena events and also over the two days driving skills will be demonstrated in tractor trailer tests.

In the age of high-speed everything, the event will create an opportunity to glimpse a slower and simpler time and the old-fashioned atmosphere will be appreciated by those who attend.
This year there will be a huge line-up of craft and other stalls, and an increased variety of refreshment outlets will entice the hungry and thirsty.

Biddenden Tractorfest and Country Fair is run solely by volunteers of the Biddenden Entertainment and Social Team and proceeds are distributed to local charities and other organisations.