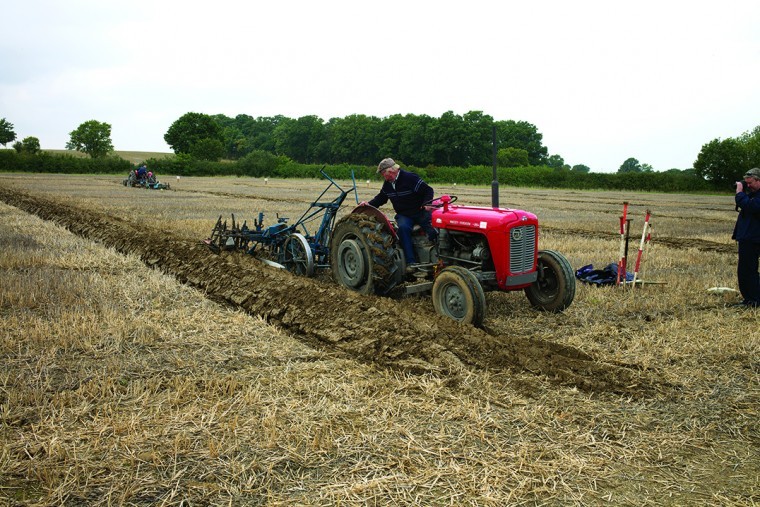 They came to see over 230 champion ploughmen and women compete for the titles of British Champions.

Peter Alderslade from East Bolden, Tyne & Wear won the title of British Reversible Ploughing Champion for the third time in a row; and David Chappell from Hatfield Woodhouse, South Yorkshire took the British Conventional title for the second year.

Peter struggled on the first day’s ploughing, finishing a good 15 points behind Cornwall’s Ian Brewer, but a score of 311 was enough to take the second day’s title, 30 points in front of runner-up, Mick Chappell from Bothamsall, Nottinghamshire. Third place was Colin Bowen from Craven Arms, Shropshire.

The Conventional title was easily taken by David Chappell – again, on the first day he was placed second to Lincolnshire’s Ashley Boyles but determination in the final plough-off on the second day but him well ahead, with his winning score of 280 points, with Ashley placed second with 256 points and Rowland Glanville from Cornwall in third place, just 4 points behind.

Peter and David will both now represent their country at the 2016 World Ploughing Contest which will be hosted by the Society of Ploughmen next year. The Contest will take place on 10th & 11th September at Crockey Hill, near York.

The land for the British Championships this year was kindly loaned by Pat Burke and family and was a good, level site. However, the land proved to be very tough for some of the competitors, bringing out the skills of the top ploughmen and women.

The horse ploughing classes were hotly contested, with twelve pairs of magnificent horses working side by side in the field. Jim Elliott from Co Durham won the general purpose class on the first day and also the high cut class on the second day. His aggregate score of 367 points put him well ahead of runner-up, Martin Kerswell from Buckfastleigh, Devon with 304 points and Steven Glavin from Selby, North Yorkshire came a close third with 301 points.

Unfortunately, Ken Chappell, Executive Director of the Society of Ploughmen, the Championship’s organisers, was taken ill on the evening before the Championships, so Sue Frith stepped into his shoes at the last minute to run the event. Speaking at the award ceremony after the final plough-offs, Sue said: “Pat Burke and his family have been perfect hosts; the help from our local organising committee was exceptional and the welcome we received in Kent was second to none. It was a great atmosphere and to top it off, the sun shone all weekend for us!”.

Next year’s British National Ploughing Championships will move to the north of the country and will be held in conjunction with the World Ploughing Contest, on Thursday and Friday, 8th and 9th September at Crockey Hill, near York, with the World Contest being held on Saturday 10th and Sunday 11th. The whole event will cover over 500 acres with 300 ploughmen expected from the Great Britain and over 30 countries represented in the World Contest.