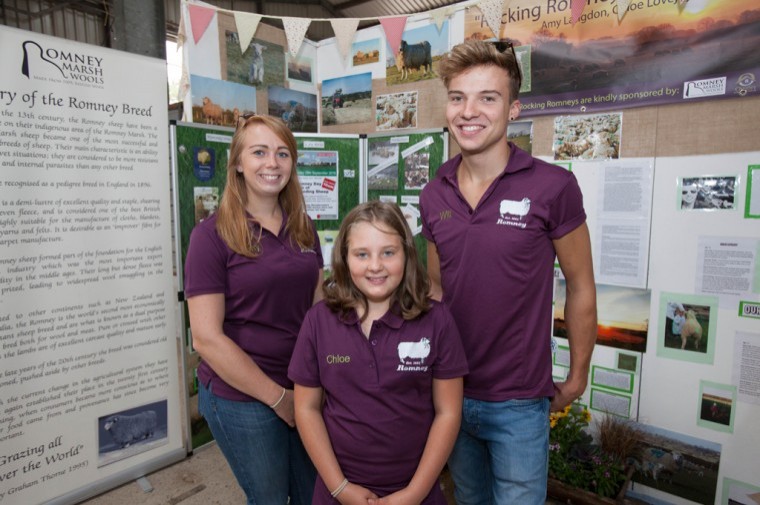 Commenting on the National Young Stars at the prize giving ceremony, event chairman Neil Lloyd said: “Yet again the standard of youngsters competing was mind blowing to see. The work these teams put in over the two days, not to mention in the run up to the event is to be commended and they’re all a credit to their sponsors, family and the industry.”

The event, which is hugely supported by headline sponsors Allflex UK, sees more than 120 youngsters aged between eight and 26 years of age compete in various sections in competitions including stockjudging, show preparation, ring craft, public speaking, marketing and publicity and industry knowledge competitions, making this event a standalone national platform for agriculture’s next generation.

Flying the flag for the South East in the Untrimmed sheep section was Tolly Ridge, Dallington, East Sussex, who along with his two team mates Chris Adamson and Henry Scott, entered under the banner of the Kerry Hill Young Breeders.

These three individuals impressed the judges with a fantastic promotional stand which won the overall promotional stand award of the show and high standard of presentation throughout all areas of the competition.

Commenting on their win, judge Brian Davies said: “These three young men are a credit to their breed and impressed us with their work ethic, teamwork ethic and dedication to the competition.” Runners up in the trimmed section were the Hampshire Down Hot Shots of Ellie Alvis, Stephen Short and Samantha Todd.

Also competing in the sheep teams, this time in the Untrimmed Sheep section was a team of Southdown representatives consisting of Mollie Gamble, Orpington, Kent, Nick Cooper, Strood, Kent and Elliece Kempster, Chatham, Kent. With two Southdown shearling ewes from Mollie’s own flock, they came a credible third place with Millie winning the untrimmed stockjudging section as well.

Standing fourth, also in the untrimmed section, was the team from Wittersham-based Lovejoy Farm Partnership. Will Edmonds who is shepherd for the commercial and pedigree sheep operation owned by Ed and Gemma Lovejoy teamed up with their eldest daughter Chloe Lovejoy and fellow Ashford Young Farmers member Amy Langdon.

Meanwhile in the cattle lines, the winning dairy team saw Florence Mannerings, Alkham, Kent win the section representing the Farmers Guardian sponsored Dairy Shorthorn team. Florence was competing alongside Bob Crank, Cheshire and Hannah Morgan, Shropshire. These three will now be heading to the European Dairy Show next year at Libramont as part of their winning prize.

A new competition this year saw a section for Dual Purpose and or Untrimmed Cattle with the Sussex Martlets team coming in as runner ups. The team consisted of Grace Twyman, Ashford Kent, Sarah Dykes, Wivelsfield, Sussex and Freddie Hutchings, Hailsham, East Sussex, all representing the Sussex Cattle Society and Bungehurst Farm. Freddie went one better and was awarded the best under 16 team member in the section.