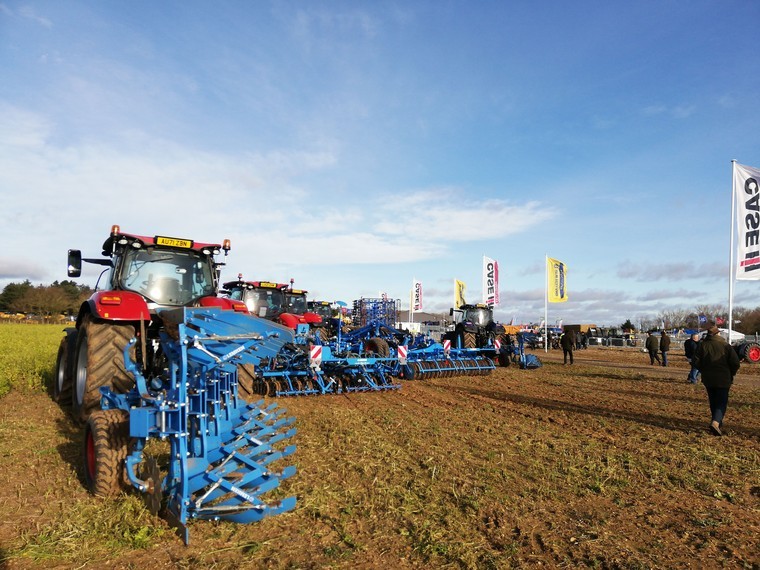 Claimed to be the UK’s largest agricultural, construction and groundcare machinery event, Graham Parker, Ernest Doe Sales Director, said: “With an attendance of well over 10,000, this year’s show was the second largest in our history, being beaten only by our golden jubilee show 12 years ago.”

The show was not being treated just as a day out to look at ‘big boys’ toys’, but real business was being transacted, with visitors, not just locally but from most English counties as well as Wales and Scotland, having serious purposes in mind.

One hundred and fifty suppliers took the opportunity to exhibit their equipment and services. From the huge range of Case IH and New Holland tractors and combines through to small grass cutting machinery, there was something of appeal for everyone.

Apart from the many tractors there was every conceivable piece of equipment to attach to them – ploughs, cultivators, drills, rolls, harrows, fertiliser spreaders, balers, grassland and groundcare machinery, hedge cutters and trailers. In addition, there were very many small trade displays of farm equipment and services, while Doe’s permanent showroom featured garden machinery, tools and spare parts as well as a vast range of practical and fashionable countryside clothing for men and women.

From an environmental point of view, the first showing of the new T6.180 from New Holland, which is the world’s first 100% methane powered production tractor, was the show stopper.

This was attracting a great deal of interest, as farmers with the right infrastructure can generate their own biomethane from anaerobic digestion plants using agricultural, horticultural or animal waste – or even growing energy crops such as maize – to power the tractor.

Gas may also be obtained from the gas grid network or at specific biomethane stations. Currently there is a price premium for this machine, but it most certainly does demonstrate the way ahead to help with environmental problems and as an alternative to fossil fuel.

In conjunction with Cheffins, there was a timed online auction for the 600 lots on display. There were no buyers’ fees. The winning bid was what was paid, and Doe offered free delivery within their trading area for all items over £2,500.

Graham Parker commented: “64% of the lots were sold and there have been a large number of post-auction sales as people realised the huge increases in the prices of new equipment. The slowdown in new tractor registrations in the UK last year has continued into the New Year and has sparked interest in good used machines.

“We’re delighted with our collaboration with Cheffins, and this has been very successful for us both.”

Part of the attraction of the Doe Show is the machines being demonstrated and Doe had New Holland and Case IH tractors demonstrating New Holland, Lemken and Bednar ploughs, cultivator and mower.

No Doe Show would be complete without the very popular display of vintage and classic tractors. This included a 1925 Fordson Model F, a 1931 Case Model C, a 1959 Fordson Dexta, a 1970 Ford 5000 and a 1974 Ford Force 500. Of course, as the star of the show, the 1961 Doe Triple D! All machines were busy, with their drivers showing huge skill with perfect straight lines across the land – to the amazement of many of the younger visitors who only know GPS positioning.