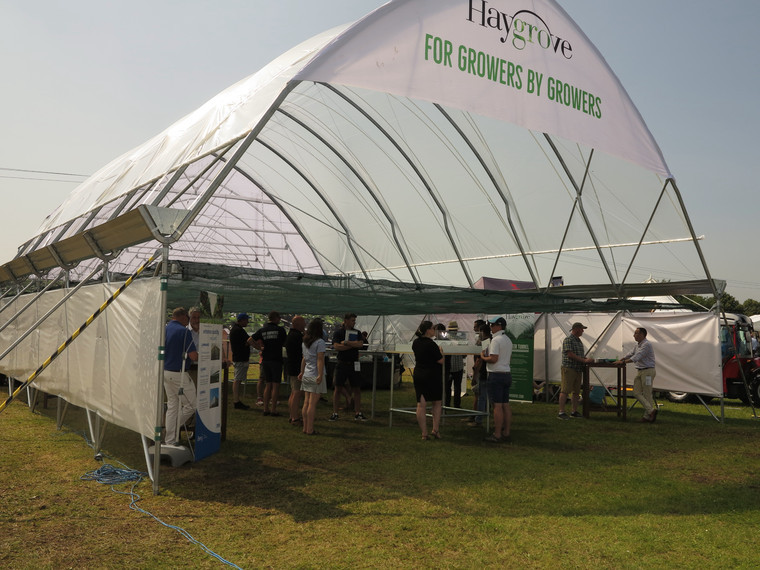 It was difficult to imagine, while strolling around Fruit Focus on one of the hottest days of the summer so far, that the event had nearly been wiped out less than 24 hours before – by something described by those who experienced it as a “mini tornado”.

Staff and contractors had to return to the site at East Malling to reconfigure and rebuild the site after strong winds and torrential rain destroyed the main speakers’ tent, wrecked sophisticated PA equipment and left the organisers grateful that it had not happened the following day.

Instead, the day of the event dawned sunny and warm, allowing visitors who had endured 15 months or so of Covid-enforced Zoom sessions to attend the popular show, hosted by NIAB EMR, reconnect with friends, chat to suppliers and just enjoy a return to something like normality.

Organisers Comexposium were careful to make the event Covid-19 safe, although the huge central space designed to ensure adequate social distancing did allow the arena to ‘swallow’ a lot of people, which no doubt contributed to the impression that it was, perhaps not surprisingly, a little less busy than in previous years.

That said, those who took the opportunity to get back in the mix and catch up with the latest technology, assess the latest offerings from tried and trusted suppliers and simply enjoy the chance of being at a live event for a change found plenty to interest them.

The main victim of the storm that wreaked havoc across the site was the speakers’ tent, which was lifted into the air and then dropped back on to the ground with a frame-twisting crash.

It meant the day’s seminar programme had to be moved to the smaller registration tent, causing a bit of knock-on rearranging but making for some well-attended sessions, including NFU Fruit Forum discussions on securing enough labour for this year and beyond and on ensuring the UK’s horticultural sector can boost productivity and remain globally competitive.

The seminar tent was busy throughout the day, with visitors also enjoying an update from hosts NIAB on strawberry breeding and varieties and a session led by DEFRA Head of Policy Jonathan Baker on the opportunities being unveiled as part of the Environmental Land Management scheme (ELMS).

Other topics discussed at the seminars included robotics and automation, the effectiveness of biological insecticides and fungicides and the future of fertigation.

While many of those who enjoyed the talks in their makeshift home would have been unaware of the last-minute change of plan, Comexposium’s Fruit Focus Portfolio Director Alli McEntyre was keen to ensure their efforts did not go unrecognised.

“A lot of the contractors were already on their way home when the storm arrived, but everybody rallied around and people came back to help sort out the damage,” she told South East Farmer.

As well as learning about the broad variety of topics discussed in the well-attended seminar programme, Fruit Focus visitors were able to talk to a range of standholders displaying everything from the latest machinery to equipment, growing mediums, robotics, agronomy advice and workforce solutions.

Exhibitors included Engage Agri, which has supported the show for the past 10 years and was back with a striking display built around a bright red floor that had been two inches deep in water the previous afternoon but looked no worse for wear by the time the show opened.

Commercial director Mark Horner said the company’s move away from traditional chemistry to more sustainable nutritional products was aimed at strengthening the crop’s own defences rather than tackling pests with chemicals after they had attacked.

There were equally striking displays of machinery on the N P Seymour, Kirkland UK and Overland stands, while a supply of well-iced Pimms on such a scorching hot day ensured good attendance at the A G Recruitment stand, where Doug and Estera Amesz were able to advise clients on the latest developments in seasonal worker placement.

It was a few degrees cooler, too, on the Haygrove stand, where the polytunnel experts had set up one of their own state-of-the-art structures within which to talk to existing clients and potential new customers.

There was plenty of interest, too, in the robotic highways demonstration in progress in the Berry Gardens area, where a robotic strawberry collection system developed in association with the University of Lincoln was being put through its paces by Professor Marc Hanheide supported by Johann Dichtl.

Professor Hanheide explained that the GPS-controlled robot helped get fruit into chilled conditions as quickly as possible and also saved pickers having to leave their station to deliver filled trays to the end of a row, something that could produce a 10% to 20% efficiency gain.

The robots have been developed in association with SAGA Thorvald, which was also demonstrating its UV-C light treatment system designed to tackle powdery mildew and avoid the use of fungicides.

Visitors to the show also took advantage of the chance to visit NIAB EMR’s Water Efficient Technologies (WET) Centre on the site, while there was also considerable interest in the DEFRA stand, where representatives outlined ELMS to a stream of visitors.