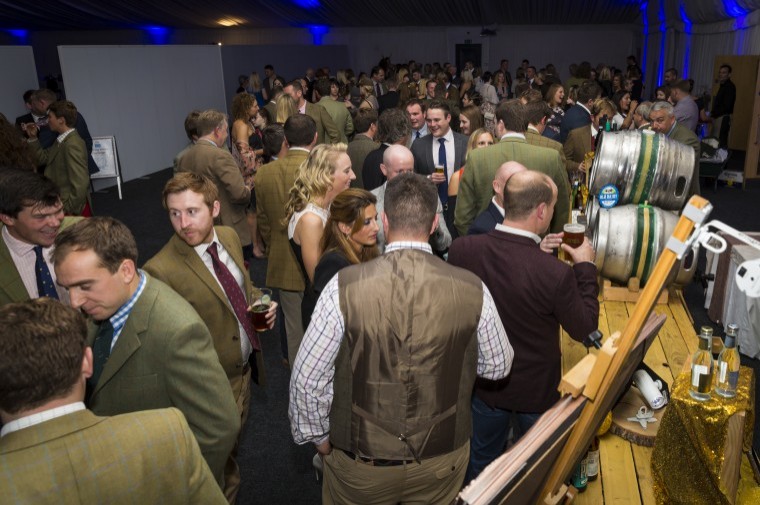 Over 200 farmers, growers and agricultural businesses gathered to enjoy a three-course meal from local caterers Home Gurr’own, before the £100 prize-draw and charity auction of a New Holland ride-on tractor, donated by Haynes Agricultural, to raise funds for the chosen charity of the year, the Movember Foundation.

“Men’s health is not talked about enough so this year we decided that funds raised from the Farmers Ball should be donated to the Movember Foundation,” said Lynsey Denness, main organiser of the event. “The foundation is the only charity tackling men’s health on a global scale year-round, covering some of the biggest health issues faced by men including prostate cancer, testicular cancer, and mental health and suicide prevention.”

The event, which was sponsored by BTF Partnership, McVeigh Parker, NFU Mutual, Pirtek Ashford and Skelton Plant Hire, also celebrated the county’s best farmers with five awards being presented on the night by Jamie McGrorty from South East Farmer, sponsors of the annual Farming Awards.

The Farming Awards, now in its second year, allows farmers, growers and those connected to agricultural in Kent to nominate their peers who deserve recognition for the hard work and passion they put into farming over the year. If you know someone who would be perfect for an award, nominations for the 2018 Farming Awards are now open and submission can be sent to the RAMSAK team.

AGRICULTURAL STUDENT OF THE YEAR

As a young lad Hamish Elliott was always obsessed with tractors and farm machinery and was driving a Massey Ferguson 135 as soon as he could reach the pedals! After leaving school in 2015, Hamish went on to receive a distinction in his two-year extended diploma in agriculture course at Hadlow College. Alongside working on various farms which have added to his ‘real life’ education, Hamish now has a place to study an agriculture and farm management degree at the Royal Agricultural College, Cirencester, which he will start after a gap year in 2018, having been awarded a Kent County Agricultural Society scholarship for his degree.

“I wasn’t really expecting it but it’s an excellent achievement and I’m very proud,” said Hamish Elliott. “I put a lot of hard work into my Hadlow course and it’s great to be recognised for those efforts with this award.”

BEEF FARMER OF THE YEAR

As the fourth generation to take over the family’s aptly named ‘Animal Farm’ near Canterbury, Matt Cullen transformed the mixed enterprise to specialise in breeding a herd of native White Park Cattle. Two years ago, after struggling to make the breed viable, he converted again and now runs a pedigree herd of Longhorns, which have only recently been taken off the rare breed register.

“To be recognised for my work and dedication to a native rare breed is a great achievement,” said Matt Cullen. “Without people like me around the country that are dedicated to keeping these traditional breeds going, they will just disappear.”

“I was drawn to Longhorn’s for the breed’s stature, confirmation and the unique marbling of the meat. The public are reverting back to traditional breeds and with endorsement from celebrity chefs there is a greater demand for a good fat content between the layers of meat.”

As well as selling breeding stock through the Longhorn Society, Matt fattens non-breeding stock for 24 months on the farm before selling the sought-after beef to hotels and restaurants in London and with a view to starting a boxed meats service in the next few years.

DAIRY FARMER OF THE YEAR

Kingcott Dairy uses the milk from its herd of pedigree Holstein Friesian and Brown Swiss cows to produce fine hand-made cheeses along with fresh milk and cream.

“We were very surprised and pleased to have won,” said Steve Reynolds. “It is recognition of the whole family’s hard work in seeking out other opportunities in dairy farming; adding value to our product, the milk, is the way forwards for family farms such as ours.”

FAMILY FARMING BUSINESS OF THE YEAR

Eckley Farms is a family-owned farming partnership growing arable crops across 1,500 acres in the Weald of Kent. Having moved to the farm in Staplehurst in the 1950’s Mike Eckley, who is now in his 70s, still looks after the spray programme and grain marketing, with his wife Vera managing the farm office. Son Guy has taken over the growing and farm policy management, implementing soil conservation methods of arable farming. As well growing cover crops during the winter months, they cultivate a mixture of milling wheat, oilseed rape, spring beans, linseed, buckwheat and barley.

In 2010, Guy’s wife Claire began using the farm’s milling wheat and oilseed rape to produce a range of cold-pressed rapeseed oils and flours under the Pure Kent brand. Claire, who continues to manage the produce side of the business, has extended the range to include a number of flavoured oils, salad dressing and in March 2017 launched an oak smoked cold-pressed rapeseed oil.

“We are very proud to have received the award for family farming business of the year because we are all in this together,” said Claire Eckley. “Our 13-year-old son James was grain carting for us this summer and his enthusiasm to join the business means we are looking forward to continuing farming into the future as a family-owned enterprise.”

Lucky winner of the head and tails game after the dinner, Claire will be donating the contents of the wheelbarrow of booze to the Kent Federation of Young Farmers’ Clubs so they can organise an event to raise money for the charity, of which Claire is the current president.

FRUIT FARMER OF THE YEAR

Farming approximately 330 hectares to the south of Coxheath in Kent, with a further 30 hectares at a satellite site near Tonbridge and an extended blackberry growing season at the Kenardington glasshouse site near Ashford, Clock House Farm produce top quality strawberries, raspberries, blackberries, apples, pears and plums for supply to the major supermarket chains.

Acknowledging the high value of the ecosystem which supports the business, the family run enterprise is committed to continually identifying and adopting sustainable farming systems and practices to minimise the impact on the environment.

In the highly competitive fruit market, Clock House Farm seeks to produce as efficiently as possible and is always investigating new growing systems and varieties to optimise the return on continuing investment.

“We are honoured to have been awarded fruit farmer of the year for the second year running,” said James Dering, farms director. “It is a credit to the team at Clock House whose hard work makes winning awards like this possible.”