Quality in every class at show - South East Farmer 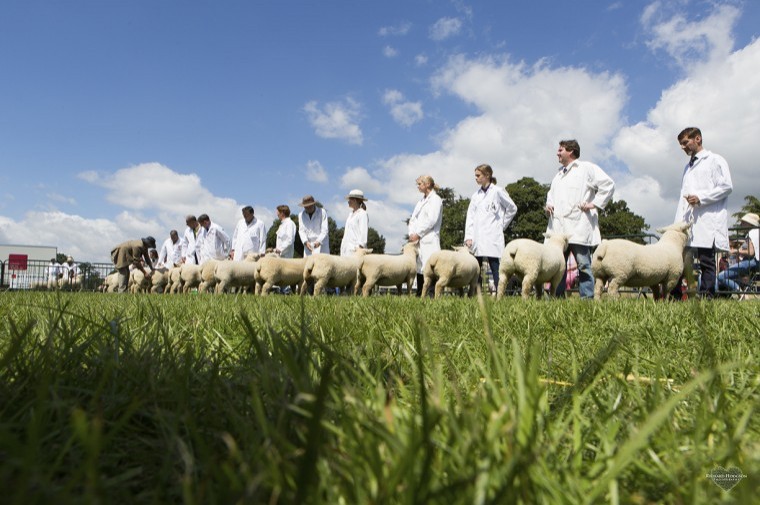 Judges Jim Cresswell and Charles Sercombe praised the quality in every class, with the society’s immediate past president Mr Cresswell commenting on the improvement in the breed over the last decade or so. “The breed continues to improve and the high standard in every class here today is testament to that. Breeders are to be commended on the continued development of the breed as both a pedigree and commercial sheep.”

Meanwhile, Charollais and Lleyn breeder Mr Sercombe said he had been impressed with the standard in the female classes he had judged, with the top end of every class showing clean fleshing, good locomotion and excellent correctness. “A number of the classes here today provided a real test to split the top two or three animals and as an outsider to the breed I have been highly impressed with every sheep I’ve handled today.”

Leading the way in the overall championship and winning the Northumberland perpetual challenge trophy was the day’s male champion and winner of the shearling ram class, Ridings 15/03099 from Messrs Wakeham-Dawson and Harmer, Offham, Lewes. This one is by the homebred sire Ridings 13/01443 and out of a homebred dam by another homebred sire. The judges were unanimous in their choice for the overall championship saying it was the ram’s overall power and strength through his front end which gave him the advantage over the reserve champion. “He’s an incredibly correct, mobile tup, with great width through his top and depth in his gigots. He’s a credit to the breed.”

Standing reserve overall and taking the Hazelton trophy for the best animal of the opposite sex to the champion was the female champion and winner of the shearling ewe class for flocks of less than 25 ewes. This one came from the Long family’s Chaileybrook flock, Bishops Frome, Herefordshire.

A daughter of the imported sire TC10187 “Sarkozy,” she is out of a homebred dam by TC4028 ‘The Frog’. Commenting on the shearling ewe the judges said she had exceptional ring presence and style coupled with great fleshing and femininity. “She moves incredibly well and has a depth and width of loin of the highest quality.”

Taking the reserve male championship was the second prize winning shearling ram from the Glaves family’s Brompton flock, Brompton-by-Sawdon, Scarborough. This is a son of Southern Cross 13/00419 and is out of a homebred dam by Chaileybrook 07/0019. This was the family’s first time exhibiting at the breed’s national show, with the judges citing the ram’s evenness of fleshing and structure as reasons for his success.

Then in reserve spot in the female line up was the winner of the January and February born ewe lamb class from the event’s host, Goodwood Estate. This one, shown by flock manager Nick Page, is by Ridings Baby Ben and is out of a homebred ewe from the 100 ewe pedigree flock managed by Mr Page alongside the estate’s commercial sheep enterprise.

Lifting the Cooper perpetual trophy for the best ram lamb was a lamb from the Ridings flock of Messrs Wakeham-Dawson and Harmer. This was Ridings 16/03692 a son of All Saints 14/266 and out of a homebred ewe by the imported sire Benoit 090019. Reserve to him was the first prize winning ram lamb from the January and February born ram lamb class from the Long family, with this being Chaileybrook 16/0006, a son of TC10187 “Sarkozy” and out of a dam by TC4028 “Sarkozy.”

And then taking the Miller Hallett trophy for the best group of four sheep were the Wakeham-Dawson and Harmer family, with reserve spot here taken by the quartet from Goodwood Estate.

In the event’s fleece competition the winner was a fleece from Henley on Thames-based Graham Ryves-Webb, with reserve going to Selby, North Yorkshire-based Neil Stanthorpe.