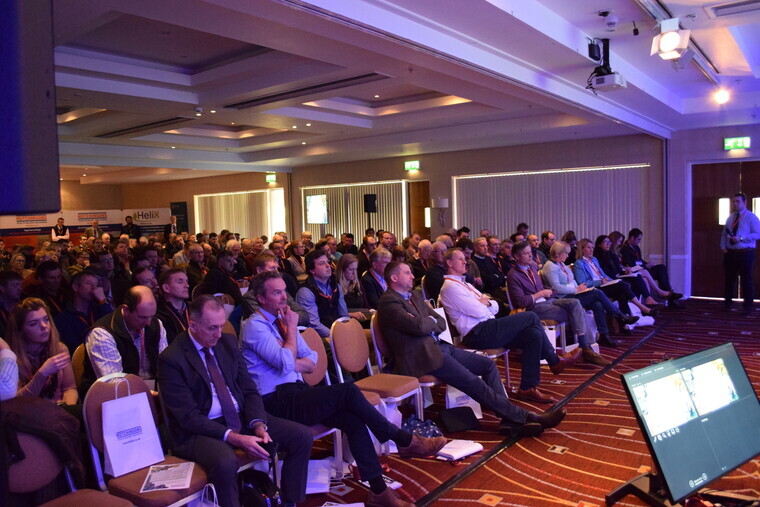 While farming was often criticised for its GHG emissions, delegates heard how the sector was pivotal to tackling climate change through improved efficiency and carbon sequestration.

It was still early days for carbon markets and financial incentives, but speakers said simple improvements to the carbon footprint made sound business sense and would help meet ambitious GHG targets.

“There is no silver bullet to tackling GHGs. We need as many farmers as possible to do everything they can to reduce emissions per hectare and per tonne.

“Farmers can’t do this alone, so it’s great to see Hutchinsons grabbing this issue.”

Speakers highlighted the links between reducing emissions, efficiency and cost savings, and that on productive land, maximising yield helped reduce the carbon footprint per tonne.

But before making changes, he, and others, advised farms to assess their individual carbon situation to identify areas to focus on and provide a baseline to measure changes against. TerraMap Carbon and Omnia Carbon management offered an ideal means of doing this.

Nitrogen fertiliser was highlighted as a major contributor to the carbon footprint on arable farms, as its production and application accounted for around 60% of emissions, The Farm Carbon Toolkit’s Becky Willson said.

Fuel use and field operations accounted for 20%, while other fertilisers, lime, seed and crop protection made up the remainder.

“Although crop input emissions are the predominant factor, we still have to produce food, otherwise we risk exporting the problem.”

Dr Nigel Davies of Maltdoctor Ltd said “abated” nitrogen fertiliser offered significant carbon savings. As former director of sustainability for Muntons he embedded abated fertiliser use in supplier contracts, reducing the carbon footprint of the firm’s primary raw material by 32%, at no extra cost to growers. Coupled with reduced emissions in malting, Muntons had decarbonised by around 60% since 2010.

While nitrogen often grabbed carbon headlines, the focus should be on soil, speakers said.

Kent farmer Tom Sewell also moved to no-till within a concerted focus on protecting and enhancing soils across 600 ha managed for 15 landowners.

“Soil health underpins everything we do.”

Cover and catch crops, plus regular organic matter additions had been vital for feeding soil biology, retaining moisture, and improving structure and workability, he said.

Finances had benefitted too. Over three years, fertiliser use had been cut 10% annually from 300 kg N/ha, while maintaining yields, and fuel used for crop establishment had fallen to 8-10 litres/ha. He planned further reductions, potentially to 4 litres/ha, by purchasing a high capacity Horsch drill.

Rothamsted’s Steve McGrath said soil was important for sequestering carbon, but soil type and land use affected its storage ‘capacity’.

Different soils had their own “saturation point” for soil organic carbon (SOC) and levels would gradually decrease if organic carbon inputs fell as material was degraded, he noted.

Soils with high clay or fine silt content were good at protecting SOC, as it became bound to mineral particles.