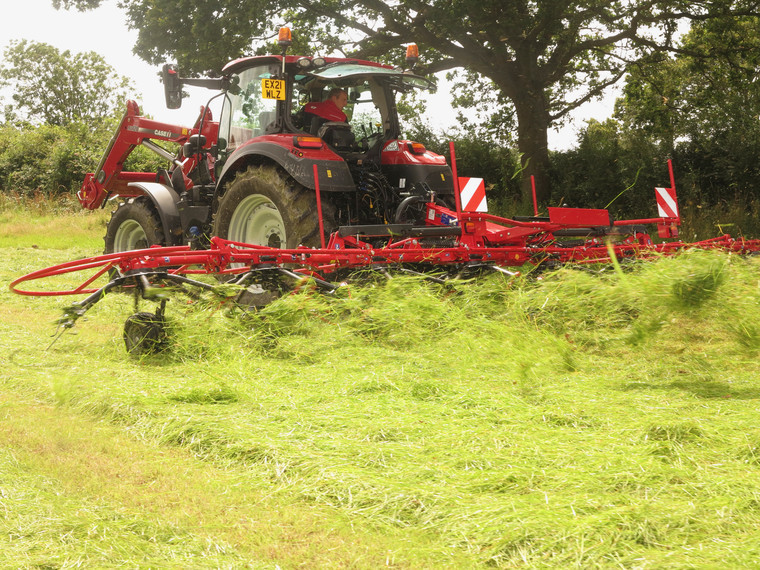 As a stiff breeze helpfully dried out the grass at Plashett Park Farm, Ringmer in East Sussex just in time for the demo machinery to take to the fields, Ernest Doe’s area branch and sales manager David Bush said he was delighted with the success of the event.

An estimated 200 farmers and contractors from across Kent, Surrey and Sussex took the opportunity to look at, learn about and see practical demonstrations of, machinery from the Ernest Doe Power stable.

The kit in action or on display included Case IH tractors and balers, together with a telehandler and high-tech combine harvester with Harvest Command automation, plus SIP mowers, tedders and rakes and equipment from KRM and Marshall trailers.

Centre stage was Case IH’s new Puma 240 long wheelbase tractor. As well as boasting a facelifted bonnet, the new model can take a camera to simplify hitching up front-mounted equipment.

On this occasion the tractor was attached to a SIP 300 Disc mower with steel conditioning tines, something SIP UK Director Martin Holden said many farmers preferred over the more usual plastic variety.

Also on display, and later put through its paces on an adjacent field by permission of farmer Mark Peters, was a SIP Spider 1300/12t, a new 12 rotor trailed tedder with an impressive working width of 12.9 metres.

The Slovenian manufacturer with a 65-year history was also showing off a Spider 915/8 with hook tines, a Star 850/26t trailed rake and a Silvercut Disc 300 TS FC trailed mower.

Case IH Area Sales Manager John McAuley was on hand to talk to potential and existing customers about the range of equipment on display, including an Optum 300 that was hitched to the manufacturer’s impressive LB436 HD baler.

UK Field Product Specialist Ed Watson pointed out the packer arms that the new model employs instead of rotors to allow the pre-compression chamber to create high-density 120cm by 90cm bales that hold 500kg a time, whatever the crop. The LB436 also features a two-speed gearbox designed to put less stress on the driveline when starting up the flywheel.

“If you can pack more into each bale it reduces transport costs and improves efficiency,“ Ed explained. “These bales are 22% more dense than standard 120 by 90 bales.”

Although not put through its paces on the day, the Case IH Axial-Flow 7250 combine was an eye-catching addition to the line-up. Alongside its Harvest Command technology, it features a camera in the clean grain elevator and air pressure sensors on top of the sieve which allow the combine to adjust its forward speed and other functions automatically and continually in order to optimise output, improve the grain sample and reduce losses.

“One of the advantages of this sophisticated level of automation is that you can use a less highly trained operator and rely on the combine itself to still produce the best possible results,” Ed commented.

Also at the grass demonstration day was Jeff Stephens from RTK, who explained the company’s correctional signal technology and its ability to uprate standard satellite technology to an accuracy of 2.5cm.

Another demonstrator was David Wagstaff, Area Technical Representative with KRM, which was showing off a M35 fertiliser spreader. He explained that the KRM approach was to source the best products – in this case a Danish-built Bogballe spreader – and import them under the KRM banner.

Adding to the comprehensive range of equipment on show was Dalbo Rollers. Thomas Atkin explained that the Maxiroll 630 Greenline rollers were designed to transfer weight hydraulically across their working width to maintain an even pressure across the soil.