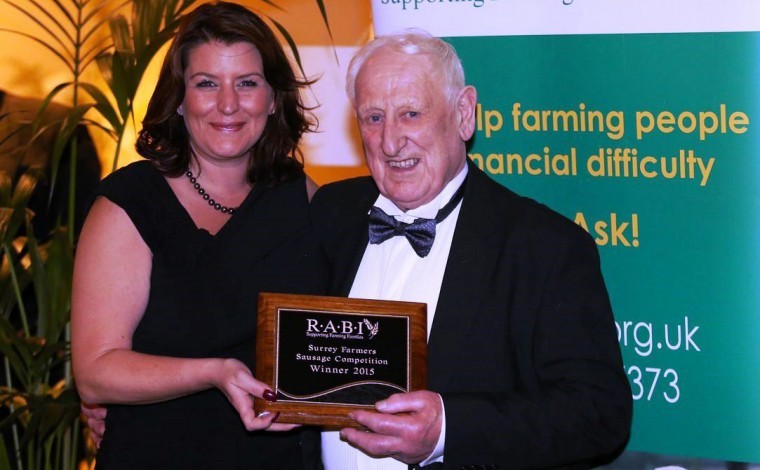 The Surrey committee of the Royal Agricultural Benevolent Institution (R.A.B.I), organised a competition to find the best sausage in Surrey and veteran Tony – who has been a butcher in Pirbright for 60 years – won out at the charity’s dinner at the Wotton House Hotel in Dorking.

A delighted Tony said: “I was a bit surprised, but my dad, who was also a butcher, always made good sausages. He told me ‘if you make good sausages, you’ll make a good business’.”

“The secret is high quality meat and natural skins, along with seasoning such as sage, thyme, salt and pepper.”

Around 170 guests attended the Dorking dinner, where they sampled and voted for their favourite locally produced sausage from the shortlisted finalists. The Surrey committee of R.A.B.I originally asked local butchers to create a sausage recipe based on their interpretation of ‘the flavours of Surrey’ and 10 butchers signed up to compete.

MC Tim Kenny kept proceedings flowing and R.A.B.I trustee Malcolm Thomas spoke to diners about the work the charity is doing to help those in financial need in the farming world. John and Georgina Emerson, who suffered during the Foot and Mouth crisis, gave a personal account of how R.A.B.I helped them, while TV presenter and vet Steve Leonard entertained everyone with stories about his career, including ‘the top 10 ways to die at the hands of a wild animal’.

Last year, R.A.B.I gave out around £2m in grants to people in financial difficulty from the farming sector.