Is regenerative agriculture the answer to improving our soils? - South East Farmer 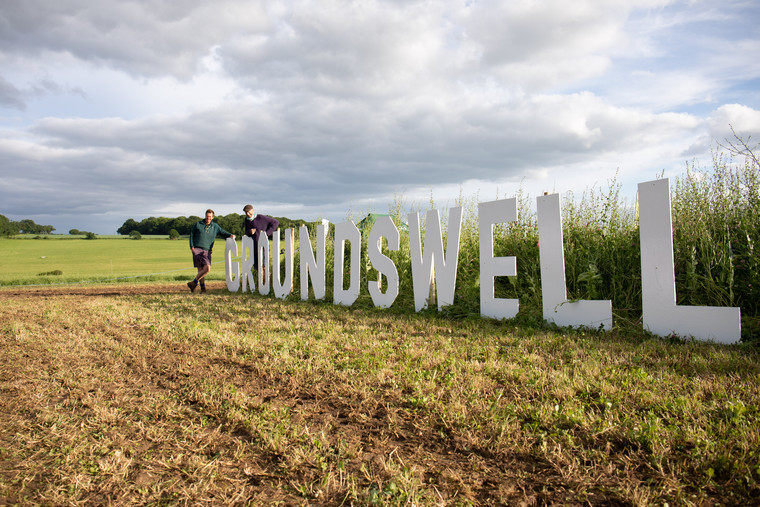 Over the past 35 years, brothers John and Paul have been on a regenerative journey, moving from a plough-based to a min till system. In 2010 they dropped cultivations altogether and went no till. Weston Park Farms includes 2,000 acres of zero tilled arable and 500 acres of pasture for their 150 head of commercial beef shorthorn cattle.

Since going zero till, they have noticed a steady increase in soil organic matter – which has roughly doubled. Their worm count has also gone up, as has their biodiversity, with more bees and birdlife around. Interestingly it’s not just about improving their soils, but “is also more profitable”, explained John.
“It’s much cheaper; we use fewer chemicals, less fertiliser, fewer tractors. Costs are so much less and our business is more resilient.”

The brothers launched Groundswell out of a sense of frustration that no-one was putting on a summer show that they might want to attend. Five years on and it has become the largest show and conference of its type. Its growth reflects the snowballing interest from both farmers and policy makers interested in the public benefits of systems such as carbon sequestration and flood/drought prevention.

This year’s event took place on 23 and 24 June and attracted over 3,500 attendees, up from 2,200 in 2019. To meet the latest government guidelines on Covid-19 security, the site was moved to a new larger location spanning several fields. Conferences and seminars were held in seven large, open-sided tents, with more than 100 sessions across the two days. Visitors could see demonstrations of some impressive farm kit in the two exhibitor and demonstration fields, including working direct drills, compost turners and robots.

There were large areas dedicated to soil analysis and testing, cover crops, herbal leys, tree management, heritage wheat trials and mob grazing. The dung beetle safari led by Sally-Ann Spence, Claire Whittle and Max Anderson was a particular hit, attracting a huge audience interested in learning more about the vital role they play in improving the quality and structure of our soils.

Exhibitors at the event included DEFRA, which on day one led a session on the incoming Sustainable Farming Incentive. In a session chaired by Sue Prichard we learned how the department is planning to make the delivery of public goods attractive by getting the rates profitable to motivate farmers to make better decisions.

In the longer term, DEFRA would like to move to a system of paying farmers for results rather than actions. They have also committed to making the administrative burden more ‘bearable’ and said it was wrong that farmers should need to pay someone to fill in a form.

During the same session we also heard from a large-scale arable farmer who for the first time had sold his carbon credits on the private market, a move that he claimed more than offset his loss in Basic Payment Scheme (BPS). His hope was that this new market could end up replacing the need for taxpayer support, enabling farmers like him to “stand on our own two feet”.

Other farmers I spoke to urged caution on signing up without first fully exploring the longer-term implications and potential ‘issues’ such as double accounting. Most agreed, though, that carbon and biodiversity agreements will play an important role in the future of farming. So watch this space.

On day two the Rt Hon George Eustice, Secretary of State for DEFRA, was interviewed by Baroness Rosie Boycott on the future of the Environmental Land Management scheme (ELMS), after which the floor was opened for questions from the audience.

He acknowledged the environmental benefits that regenerative farmers are already delivering and provided insight into some of the mechanisms designed to accelerate sustainability in farming and move towards “paying farmers properly for nature”. Topics covered included encouraging new entrants, local food systems, the planting of trees, increasing carbon sequestration and achieving net zero by 2050.

In response to a question about the Australian free trade deal, Mr Eustice sought to allay fears, saying the Government was looking at a carbon border tax to prevent unfair competition from products with larger emissions.

Other sessions I attended on day one included The Role of Finance in the Regen Transition and Carbon Payments are Here. Both were fascinating. In the former, one member of the panel remarked on the large disparity between sectors, with investors ready to invest tens of millions of pounds in areas like vertical farming while livestock farmers struggled to raise £25,000. Another panelist and investor said progress was being made, with more ‘patient’ capital available to regenerative farms with a longer-term payback.

He explained that initially the scheme will only be open to arable farmers with a minimum of 200 to 300 hectares of land. It involves an annual baseline assessment, costing just under £1,000, to determine whether your farm is a net emitter or net sequesterer of carbon. Based on the findings, Soil Capital then advises on the best way to reduce emissions and start sequestering carbon into your soils.

Payments received by the farmer are based on 70% of the final price of the certificate, with a floor price of £23. As an example, he said a farmer that moved from ploughing to min till could expect an annual payment of between £3,000 and £4,000. More details are available via their website.

One of my favourite sessions was on How to transition to Pasture-Fed Dairy, chaired by Jimmy Woodrow of the Pasture For Life Association. The diverse panel of farmers, which included Dan Burdett, discussed the issues holding back the sector.

Moving to once a day milking, spring calving and focusing on the power of grass were highlighted as practical solutions to making the transition to a ‘more stress-free farming system’. Offering advice to the audience, Angus Dalton quipped: “The best investments come on a roll,” referring to electric fencing or water pipe.

Lastly, I was thrilled to catch up with the Land Gardeners and the wider Climate Compost team, which was running workshop sessions and demonstrations on how to make their microbially rich compost using a mixture of straw, manure, fresh greens, old compost and clay.

As with all conferences, there were many sessions I didn’t get to see such as A Regenerative Journey, sharing the story of an Oxfordshire farm transitioning to a fully regenerative approach in two years. I also wanted to see the Fibreshed UK session.

Thankfully the Groundswell team recorded the sessions and are planning to make them available on their YouTube channel soon.

To finish I wanted to highlight the award-winning podcast Farmerama Radio, which has just released a new four-part series called Landed which explores land ownership and colonial legacy, told by a Scottish farmer’s son (Col Gordon) as he returns home to his family farm.

Having so far listened to the first episode, I think the series will resonate with anyone interested in the future of family farms and regenerative farming.

Read our full feature on Groundswell