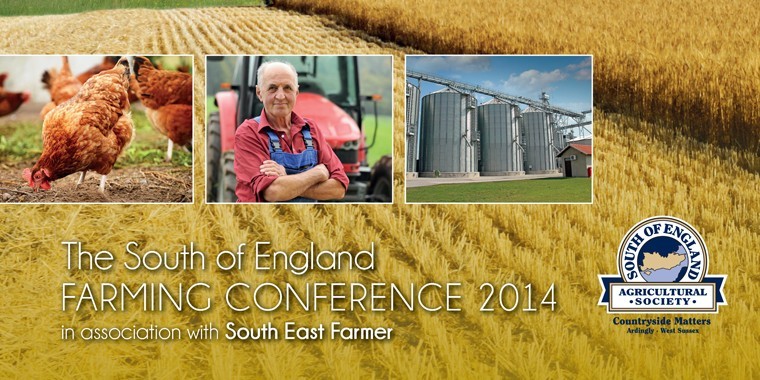 A lively debate looks set for the renowned panel of speakers at this year’s South of England Farming Conference on 12 November at the South of England Showground in Ardingly, West Sussex. They have been invited to debate one of the most important global issues facing society: how are we going to feed nine billion people and what role does the UK farmer play in this?

Organised by the South of England Agricultural Society, the conference attracts over 250 farmers, landowners and agriculturalists from across the region. At last year’s conference, speakers agreed to disagree about who could afford food produced in Britain, leaving a clear message that there is still a huge journey ahead to keep Britain and its farmers competitive with the rest of the world.

“This year’s conference will open up a hugely topical debate. The arguments are well rehearsed; population growth, the rise of the middle class and ever increasing demands on a declining resource base will create pressures on the global economy like we have not experienced before,” said Duncan Rawson, a Nuffield scholar sponsored by the Society and this year’s conference organiser.

He continued, “But for agriculture, whilst the challenges facing us are immense, we sit on the precipice of a new era; an era when the farmer who is prepared to embrace change and do things differently can look forward to a bright future.”

The conference will ask if this farmer could be a UK farmer? Can UK farmers compete on a global basis or will they be left behind by those farmers around the world with greater entrepreneurial flair? Three eminent speakers will lead the debate.

With over 30 years experience as an international public speaker, Séan Rickard will be first to speak at the conference. He was chief economist at the NFU for many years where he was responsible for the Annual Review of Agriculture conducted with the government and until 2012 he was a government academic adviser on food and agricultural policy and took a leading role in protecting the interest of UK farmers in Europe.

Hugely respected and well known for engaging an audience, Séan has very forthright views on food and farming, including climate change on food production, the importance of science and technology and the shortcomings of current policy.

Also speaking at the conference is director of policy and public affairs for the Game and Wildlife Conservation Trust, Dr Alastair Leake. He leads the Allerton Project, a commercial farm in Leicestershire, showcasing how intensive farming can be undertaken alongside ground breaking environmental practice.

Alastair was a member of the Government’s Independent Scientific Advisory Committee for Pesticides (ACP) for seven years, latterly as deputy chairman; was on the BBC’s Rural Affairs Advisory Committee; and has been chairman of the UK Soil Management Initiative (SMI) and a director of The Arable Group.

David Christensen is a hugely respected public speaker and manages Kingston Hill Farm Ltd, a family owned farming company operating dairy and beef farming enterprises in the Thames Valley, farming 1300 acres of rented land on which 600 cows are milked and up to a further 800 cattle are reared.

David is a former chairman of the Maize Growers Association, has been a director of the Orion Farming Group (a farm input buying group), was a farmer director of Milk Link and now sits on the Board of Representatives for Arla. He sat on the Farming Regulation Task Force Implementation Group and the steering group for the Prince’s Rural Action Programme for Dairy Farming.

David is also a trustee of the Oxfordshire Agricultural Society Trust, a charity that gives financial assistance for training and development to young people living in Oxfordshire and engaged in the agricultural sector.

Said Duncan Rawson, “We are delighted that this conference has once again attracted such high profile speakers and we are also excited to welcome back BBC Radio 4’s ‘The Food Programme’ presenter, Sheila Dillon to act as chair again this year. She steered the debate extraordinarily well last year and has a notable reputation for tackling some of the toughest issues in the food and farming industry.”

Some of Sheila’s most significant work includes breaking the scandal of BSE, the rise of GM goods, the growth of the organic movement from muck and magic to multi-million pound business, the birth of the World Trade Organisation and irradiation, all at a time when those subjects were not even a gleam in a newshound’s eye.

Sitting in the middle of 150 acres, the South of England Showground is the ideal venue to host the Farming Conference, sponsored this year by South East Farmer magazine, Mayo Wynne Baxter, Complete Land Management (CLM) and Chavereys.