» Fruit farmers rising to the challenges ahead 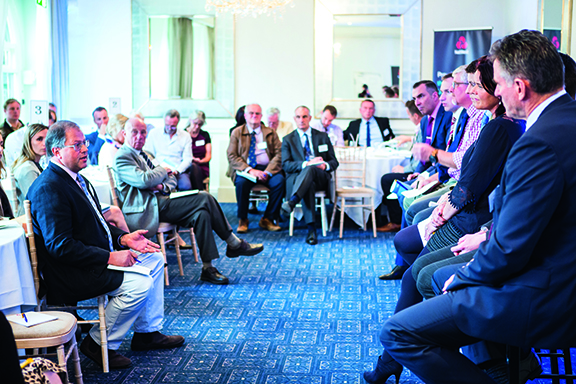 Kent – the ‘garden of England’ – was a fitting location for the 50 owners and managers of agricultural businesses, predominantly fruit growers, who came from around the South East to meet industry figures and bankers at the Future of Farming event writes Chris Torney.

Ross McEwan, CEO of NatWest, opened the event at the Chilston Park Hotel near Maidstone and made the revelation that he himself has a stake in the farming business: “I own a cattle farm back in New Zealand,” he said, “so while I’m not a farmer, I do understand the vagaries of owning such a beast.”

He was keen to stress the importance of the agricultural sector to the bank. “We support roughly 29% of all agricultural lending that goes on in the UK. We also have 150 sector experts – unless you have experts in the sector, you are not going to do a good enough job.”

McEwan’s colleague, Sebastian Burnside, chief economist at NatWest, raised one of the most talked-about issues of the day – productivity – pointing out that most of the growth experienced across the British economy over the past decade had come from bringing more individuals into the workforce.

“But with unemployment at a 40-year low, rediscovering the art of getting more from our people is going to be the key to the future,” he said.

The availability of workers from overseas was a pressing concern among attendees. Tim Chambers, managing director of Maidstone-based WB Chambers, a family-run fruit-growing business that operates in 14 locations around Kent, said that lack of labour could have the greatest impact on the industry over the short term.

“We rely entirely on workers coming in from abroad for a short period at a time,” he said. “And we need them to be available flexibly.”

Chambers added that the government understood the needs of the agricultural industry in this regard, but was finding it difficult to take the necessary action due to the other high-profile challenges it was currently facing.

“But I do think that common sense will eventually prevail,” he said. “Not least because of concerns about food price inflation.”

The limits of technology

Technological innovation, in particular machinery that could replace manual pickers, was thought to be the solution for some farmers, but not for all. While some attendees said they expected automation to become realistic for the picking of top fruit (tree-grown produce such as apples and pears) within the next decade, soft-fruit growers pointed out how much more difficult it was likely to be to use such technology to harvest the likes of berries.

Chambers added: “Even if the technology is viable, my business employs 1,400 people: how many robots would I need to replace them? And would I be able to borrow enough money to buy them?”

Prepare for all Brexit scenarios

Preparing for Brexit and beyond was another source of uncertainty for farmers, with David Swales, head of strategic insight at the Agriculture and Horticulture Development Board (AHDB), warning: “The majority of horticultural businesses we talk to say they are ‘waiting to see’ what happens with Brexit before taking any action. But that is a very high-risk approach.”

Instead, Swales explained, firms should start to model the possible best – and worst – case scenarios and see how they would be likely to play out.

“The good news is that the horticultural sector is well placed to weather some of the negative effects,” he added. “In a sector where the UK imports so much, the introduction of tariffs could be good news.”

McEwan said businesses should take advantage of the transition period that is expected to follow Britain’s formal departure from the EU in March 2019 in order to boost their productivity levels.

“If we can get productivity back up in this country, we can compete against anything that is coming in,” he added. “Your advantage is that you are already here, and other companies have to pay to ship their produce here.”

McLean said that businesses should think strategically about how to meet the range of challenges they were facing. “Try to disrupt your own business – or you are likely to be disrupted,” he said. “Challenge all the parts of your business and make yourself more resilient. Change is difficult, but if you stick at it, you will get the uplift.”

After the event, Chambers said: “I was pleased to hear the bank is taking a more open view about lending against ability to service the debt as opposed to security on an asset. Access to capital is one of the most important issues for the industry: over the next few years, businesses in the sector will inevitably consolidate, and they will become more professionally run. As a result, finance will become a bigger concern.”