» Doing the best things in the right way 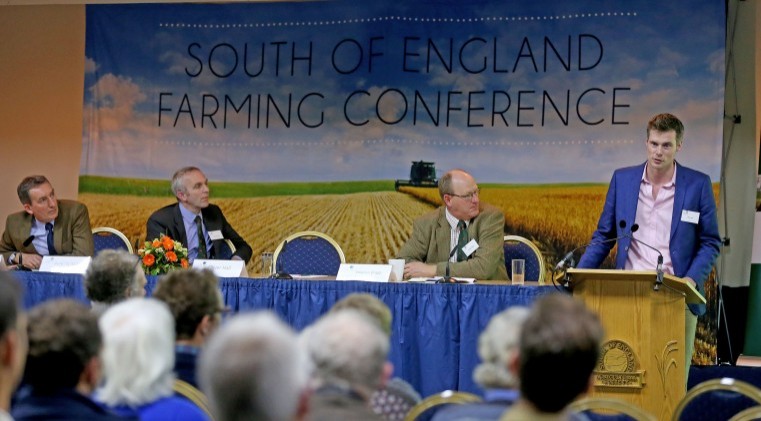 Farmers cannot risk waiting till March 2019 to see what happens after the UK leaves the European Union, claimed ex NFU president and current chair of the Agriculture and Horticulture Development Board (AHDB), Peter Kendall, at the South of England Agricultural Society’s annual Farming Conference, held on Wednesday 15 November 2017 at the South of England Showground in Ardingly.

The conference was titled “Evolution or revolution? The next 50 years” and focused on debating what the future may have instore for the agricultural industry. Mr Kendall encouraged the 250 farmers, landowners and agriculturalists in attendance from across the region to focus on “the things we can influence and change ourselves” stating that there “are plenty of things individual businesses can do now to prepare themselves for the unknown”.

While he “didn’t predict Brexit”, the fifth-generation arable farmer started making changes to his business in Eyeworth, East Bedfordshire three years ago (two years before the referendum result). With the establishment of a broiler business, Mr Kendall is now supplying chickens to the supermarkets 24 hours a day as part of a very integrated supply chain.

“We have someone who sends the feed and the chicks and this is a subsidy free sector so I get a cheque every seven weeks,” said Mr Kendall. “Compare this to the cereal farming; I feel a complete idiot for running around all summer with the difficult weather we have had when the chickens have produced more money.”

For farming businesses who cannot simply diversify in such a way, Mr Kendall’s advice is also to question “whether we are doing the best things in the right way”. While farmers heeding that advice could look at countless contributors to productivity and efficiency on the farm, the key to survival could be to look at whether the end product is relevant in today’s society.

As research from the AHDB demonstrates sales of traditional food products are deteriorating, for example lamb consumption has fallen by 7.9% and fresh potatoes have been in decline for the past 70 years. With this in mind farmers need to spend more time thinking about how to dovetail products into the rising demand for quick and easy ready meals.

“We need to understand what consumers are doing. They no longer spend a lot of time preparing meals; they are busy people and the average is 30 minutes for an evening meal,” said Mr Kendall. “We need to find a way to get products we are producing into their modern lifestyle and understand how we can be producing what the consumer wants.”

With its short cooking time and prevalent use in fast foods, the demand for chicken, Mr Kendall was happy to observe, is in fact on the rise. But for those sectors in decline, it is not simply about increasing marketing campaigns and encouraging people to eat more.

The key to increasing income is from looking at how the end product can be modernised. Sheep farmers, for instance, need to stop persuading the younger generation to eat more roasts and should instead focus on incorporating lamb into wraps or sandwiches and other quick meals in high demand in today’s modern, on-the-go society.

Providing produce that the consumer wants was not the only discussion point. Looking forward to the next 50 years there is a greater need to educate and engage with end users, a point which was stressed by panellists Peter and Chris Appleton.

The second and third generation dairy farmers, who run a herd of 450 cows producing 4.2 million litres of milk per year from the 700-acre farm in East Sussex, have noticed that there is a current disconnect between the consumer and producer which needs to be rectified.

“We are doing everything we can at ground level to make sure the business is in the most resilient position to come through Brexit,” said Chris. “In the long term, we are trying to ensure that our product sells and, even though we are not selling direct to the consumer, public education can persuade them that they should be buying British and to support our industry in the long term.”

As well as participating in initiatives such as Open Farm Sunday, the farm has opened a bluebell walk and farm trail to the general public which saw 22,000 visitors come through in April and May 2017.

“Having the general public in to visit the farm didn’t happen a generation ago, but we are seeing a much greater interest in transparency and it is now up to us to market our produce,” said Peter Appleton. “This year it was a new experience to entertain a small but enthusiastic group of vegan animal rights activists, who came with an open mind and I think ultimately that by the end of the exchange we had perhaps just closed the gap a little bit in putting across our story.”

With limited reliance on subsidies, Peter and Chris seem largely unworried by the prospects of Brexit and both are looking towards the future with optimism. While the sector is at risk of a labour shortage, with evidence suggesting already dwindling numbers of Polish staff, for instance, Peter believes the region is already “addressing those issues”.

Following years of debating where the next generation of farmers will come from, there appears to be a good supply of new entrants into the industry from agricultural colleges and on the Appleton’s farm there has now been “three workers who have come through the ‘talent shop’ that is Plumpton College”.

As Peter puts the family farm’s survival down to the increased developments in technology and the corresponding increases in yield, for panellist David Wilson, farm manager at Duchy Home Farm at Highgrove, farmers thinking about the future should be turning away from man-made chemical solutions and intensive farm machinery and looking towards sustainable farming.

“We need to incorporate thinking about whether this is good for mankind or the planet into as much as we can,” said Mr Wilson. “The soils have become wrung out after decades of intensive production. We should think of the soil as the stomach of the plant and if we look after the living part of the soil it will hold onto more carbon, more nutrients, more water for longer, be less vulnerable to erosion and capable of producing better crops.”

As well as sharing tips on crop rotation, composting, the importance of taking care of soil, and revealing how useful sheep can be to improve ground for crops, Mr Wilson also highlighted the importance of genetic diversity when dealing with climate change and unpredictable weather.

“It is important to find a crop which has some stability in varying conditions,” said Mr Wilson. “The real difference genetically between most modern wheats is minimal but if we want resilience we must look after our diminishing gene pool. Farmers need to treat these remaining genetics as part of our heritage and put the highest value on them because you may be sure they will be needed to help us cope with whatever the future throws at us.”

Regardless of what lies ahead for subsidies or trade agreements outside of the EU, whether the industry is on the cusp of a revolution driven by technology, environmental concerns or globalisation, or whether it will continue to evolve slowly within the continually changing world, there is always another way of looking at the farm and making sure it is being farmed in the right way to ensure it continues to thrive and survive over the next 50 years.