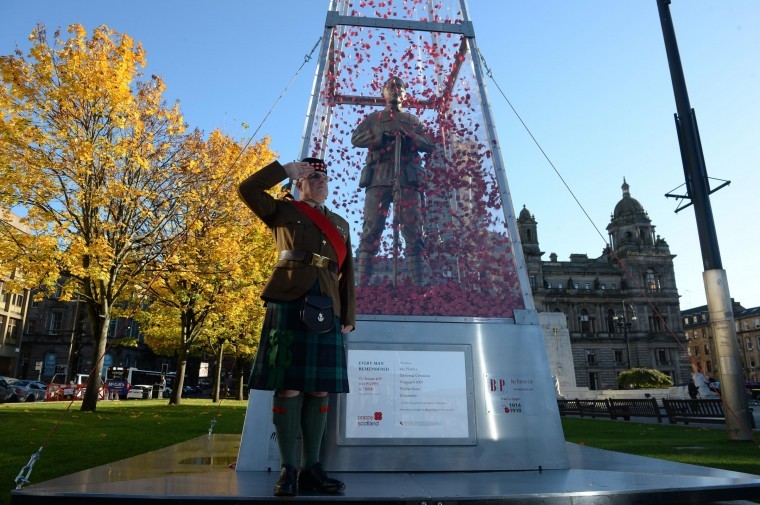 The Kent County Show on 6, 7, 8 July 2018 will host The Royal British Legion’s iconic ‘Every One Remembered’ sculpture as well as a display of handcrafted poppies made by the local community to commemorate 100 years since the First World War ended.

The unique installation provides a fitting tribute to the sacrifice of British and Commonwealth servicemen and women during the First World War. The sculpture, designed by award-winning artist Mark Humphrey, features the ‘Centenary Soldier’ standing on a plinth of limestone sourced from the Somme. The statue, manufactured by Universal Creations Ltd, is finished in bombshell brass which is inspired by the artist’s own grandfather who inherited a brass bombshell, decorated by his great-grandfather in the trenches when he fought in the Somme in 1916. The ‘Every One Remembered’ sculpture, which has previously been in place in Trafalgar Square London, Cardiff City Centre, St Georges Square Glasgow and proudly located outside the Theatre Royal in Newcastle Upon Tyne, is encased in a Perspex™ obelisk manufactured by Bay Plastics Ltd. It is joined by thousands of poppies which flutter around the soldier. Visitors to the Show will be able to donate to The Royal British Legion at the memorial next to the Garden Life Marquee and add a poppy to the sculpture.

Alongside the ‘Every One Remembered’ sculpture will be a community built knitted poppy display which will be hosted inside the newly located Garden Life Marquee. To create the display, the Kent County Show is appealing to members of the public to send in their knitted poppies. Poppies can be knitted, crocheted or crafted from felt. Contributors can also send in their details to be included in a contributors list and can dedicate their poppies if they wish. Following the Show, poppies will be donated to local council gateways across Kent to increase the displays planned for November.

Julie Ness, East Kent Community fundraiser for The Royal British Legion, said: “The memorial at the Kent County Show is set to be a wonderful display to commemorate this significant anniversary. We are delighted to be working with the Kent County Show team to remember those who lost their lives and to support veterans and their families.”

Lucy Hegarty, show manager of the Kent County Show, said: “We wanted to be able to commemorate 100 years since the end of the First World War with a fitting tribute to those who lost their lives. The community built poppy display will form a beautiful centre piece to the Garden Life Marquee and we hope as many people as possible will knit, crochet and make poppies to add to the display.”

The displays will also be joined by the Household Cavalry Musical Ride which will be the main ring attraction at the 2018 Kent County Show.

Knitting and crochet patterns and the submission form can be found here: www.kentshowground.co.uk/poppy