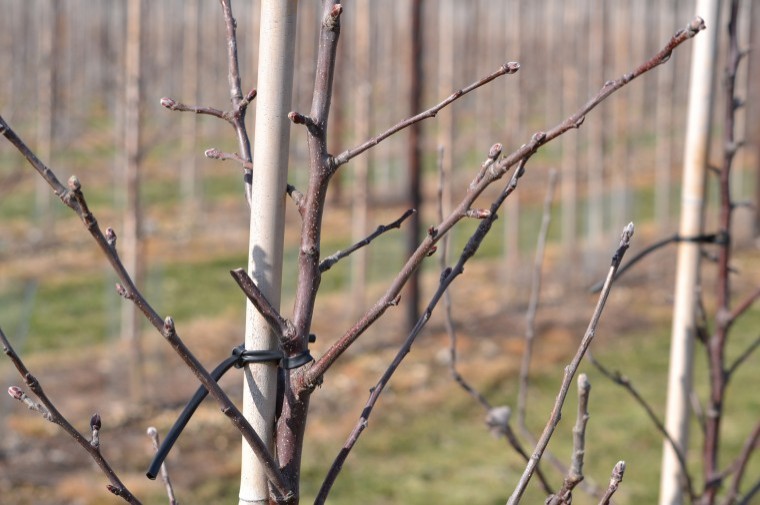 Extensive work in pruning and tree management techniques are improving quality and grade outs are up, according to the UK Cameo Club. The annual club walk in March was well attended by a large number of growers eager to learn more too. The advantages of one pruning strategy versus another was debated around the new orchards of Clive and Ross Goatham who hosted the event at their Mierscourt farm.

Visitors viewed an exciting new, 20 acre block of Cauflight: the investment by AC Goatham and Son in Cameo is a substantial one and a mark of how they see the variety as a key part of the later season offering for British apples. The orchard has been planted as an intensive trellis, supported by irrigation systems and an environmental management plan for the site, truly an exemplar orchard of the future. The group were informed that Cauflight performs well in east Kent, while later sites in west Kent that have historically seen colouration issues in Caudle orchards are really benefitting from the higher colour Caured selection.

The orchard of 23,000 trees at Mierscourt was planted in December 2013 and covers 8.05 hectares. The pollinators chosen were Mallus prof. Sprunger and Everest which was a good balance in the planting density. The trees are plated at a 3.5 meter by one metre spacing. The proposed scab protection programme consists of copper, Dithanon Flo, Captan with Scala if required. The mildew protection programme includes Topas, Systhame/Stoby (blossom) Kindred and Nimrod. A bore hole is being dug for Mierscourt.

Much time and knowledge has been invested in Cameo in recent years, through the focussed work of Norman Collett technical director Nigel Jenner.