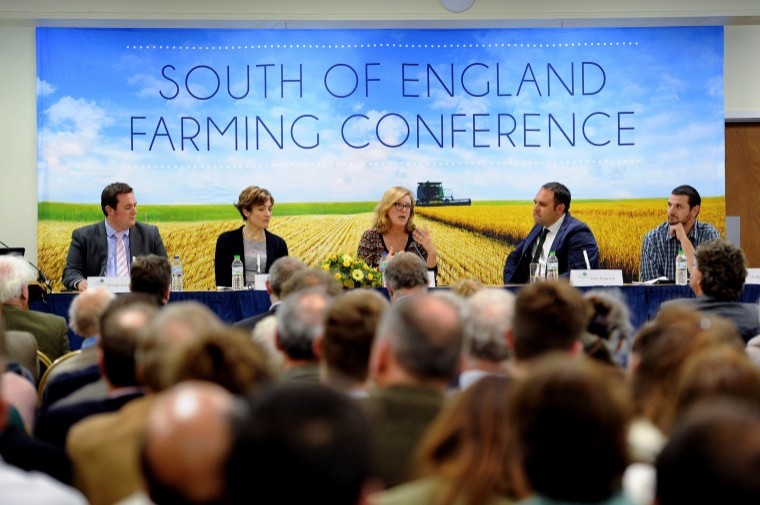 After moving away from the family farm to Hertfordshire, Rob secured a full time job as an engineer to fund his flock of 200 Romney ewes, which has now tripled in size.

Rob, who was given 400 ewes as part of a succession payout from the family farm, highlighted the many ways that the next generation can start a farming business while earning a wage to support them at the same time.

The PhD agriculture student has since gone on to study a Nuffield Scholarship, funded by the South of England Agricultural Society, and now grazes almost 500 acres of rented ground across a wide area, after building strong relationships with land agents and landowners.

As the conference heavily debated “What’s holding back the next generation,”

Rob identified one of his biggest hurdles as a next generation farmer as the broken subsidies system. He advised an audience of almost 300 farmers, agricultural students and industry specialists about the importance of five and ten year businesses plans as the basis of any successful venture.

Chaired by BBC Countryfile’s Charlotte Smith, the evening began with communications specialist, Amy Jackson, discussing why attitude is a big issue in agriculture.

With social media presenting endless opportunities for farmers as a free platform to promote all that they do, there are also challenges involved. Amy told how studies show that people perceive food issues and scares differently now, meaning more positive PR needs to be done to undo damage.

Amy also told how regular communication has benefitted farmers when making large business changes such as building work, by educating locals and getting them onside. This could be anything from writing a regular column in the parish magazine to sponsoring local sports teams and taking part in Open Farm Sunday.

Also highlighting the importance of good PR was second generation Yorkshire tenant dairy farmer Tom Rawson. Tom’s company Evolution Farming now has a 20 year tenancy, a contract farming agreement and a share milking agreement with a total of around 900 cows on a pasture based block calving system.

Tom told the audience that building a brand has helped him no end, from becoming a regular agricultural magazine columnist to studying for a Nuffield Scholarship, which he advises anyone hoping to develop a farming business to do.

Tom discussed the many opportunities available to those wishing to pursue a career in dairying, including hire cows and contract farming opportunities.

The final speaker was Doug Jackson, agribusiness director for Savills, who offered his knowledge and experience in succession planning, asking whether past generations holding back the next generation.

As founder of the national Fresh Start Academy programme – which provides business and succession advice to people looking to establish and sustain a career in the industry – and more than 22 years active involvement with Young Farmers, Doug told the audience: “We need to change our attitudes on succession planning – succession in farming is not a right. You need to be committed. The biggest barrier to succession is lack of pension provision which undermines the potential for the next generation.”

Speaking out about young people’s attitudes, Doug told how the next generation can do a lot for themselves in working towards a farming future. “The next generation must be willing to compromise. There are too few willing to risk their own money or move away to a new area and fresh opportunities.”

Doug also offered advice to those wishing to pass a farm on to the younger generation. “Treat them as an employer and ease them in slowly, don’t drop them in at the deep end.”

But above all Doug highlighted the importance of a good business plan, saying farmers must be businessmen and women first and foremost, but a farmer second, with a clear plan ahead.

The overall consensus of the evening was to encourage the next generation to think outside the box, whether this was moving to a new area where there are more opportunities, travelling to another country to see different farming methods, considering contract farming or going into a joint venture with a local landowner.

Charlotte Smith summed up the evening, saying: “Tonight we had a good, lively debate addressing some real issues and it was great to have so many young people in the audience. The farming industry needs a better reputation because we’re losing skills to other industries, but there was some very positive enthusiasm in the room which gives us hope for the future.”