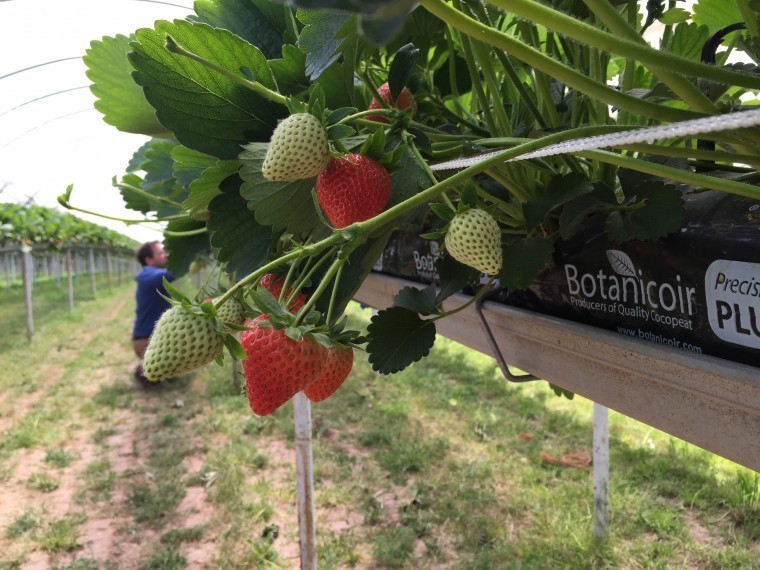 With a record 70,000 plus produce industry visitors from more than 130 countries, Fruit Logistica certainly was the place to be if you are serious about overseas business development opportunities this February.

That, coupled with 2,891 trade stands from 84 countries (our fruit show has a way to go) meant that you could find absolutely everything produce related you could possibly think of in Berlin. As with all big established shows there are on and off years: this was absolutely an on year.

I spent much of my time speaking with the British contingent, centring around the AHDB stand in the international hall, probably the busiest hall in the show. There was the strongest contingent of Brits at the show ever suggesting that more of our industry are getting on board with the concepts of overseas trade and the trade benefits of looking off shore.

AHDB chairman Peter Kendall opened the British reception with some powerful statements. He noted that there has been a market change within government about recognising the importance of agricultural and food exports, good news again for those looking abroad for capacity development.

The ICA Group had a strong presence in the technical halls, demonstrating their SafePod dynamic controlledatmosphere system. They happily reported a good show with a lot of interest in storage and control systems. In 2015 they announced that ICA Ltd had formed a consortium with scientists from the Produce Quality Centre (a collaboration between the Natural Resources Institute of the University of Greenwich and East Malling Research (EMR)), A C Goatham & Son, Avalon Produce Ltd and Sainsbury’s to trial and develop the limitations and benefits of DCA.

For the last 18 months, ICA has been working on their SafePod system and, for the past six months with the consortium, have been receiving co funding from the UK’s innovation agency, Innovate UK, for a three year research project. This season has seen the evaluation of both Gala and Braeburn stores, identifying both the optimal storage regime and also the most suitable orchard management and production methods to provide high quality fruit later in the season. Their presence at FL16 was about consolidating their overseas position, to meet with their international partners and also to seek out an extended customer base. I bumped into the team all over the show: they certainly took full advantage of every opportunity the show had to offer.

I also met Francis Wheatley of AG Thames who explained some of their plans for the new Red Love apple and their partnership with the Biddenden vineyards team. AG Thames hold the UK license for the variety in all forms – planting, crop management, juice, purée, fresh fruit sales, UK brand development and licensing of growers. Any imports of the variety are licensed for the UK market by the group too.

Biddenden were chosen as partners for the high quality juice expertise and there are already plans for their cider knowledge to be put to good use in the development of a naturally blush pink Champagne method cider to come later this year. Naturally, Valentines Day has been identified as the ideal market placement and the product range will include some limited edition, very specialist Red Love crisps made by Nim’s of Sittingbourne.

There are three clones of Red Love being trialled. One with a distinctive shape that will deliver heart shaped crisps, what a natural advantage in their chosen market place! Francis also issued a call to action for growers cordially inviting you all to go and view the trial orchard at EMR, they are actively seeking good growers to take up the Red Love challenge.

The three clones are still numbered (perhaps an opportunity for some suitable names – can I throw in True Love, Loving Kiss and Passion as a start):

Enjoying their fifth year at Fruit Logistica, the Bontanicoir team agree that it is entirely worth being in Berlin.

With many meetings with key growers organised, they were set to take full advantage of new opportunities and wider industry good networking. Kalum and his team have been investing heavily in new product development – they have just begun a new trial programme which will be launched at Fruit Focus. Destined for the soft fruits market it is designed to offer further improvement in plant health and season management.

Looking at the season ahead Kalum could see that demand for substrate is rising still as the market for soft fruit in Britain continues to grow. A lot of planning and preparation has gone into the last three years to build volume to meet this rising demand. In the past there were limitations on the volume that they could supply, but going forward there no issues. There have been massive problems with the reliable supply of coir as the last two years of rain in Sri Lanka prevented bulk outdoor drying. A big investment has been made In drying technology, with good guarantee of continuity of supply. Botanicoir have led in this area with the whole industry now following their lead.

Exhibiting in Berlin for the second time were the AC Goatham & Son team. Speaking to Ross Goatham he was very clear about the necessity to look off shore. “From a growers perspective not being involved in a world market will finish you. Being at this show has opened the door to so many avenues that would never have been available to us,” – acknowledging that the world was now their market place, not just the UK.

Carol Ford summed it up nicely: “We produce locally the best apples and pears for a global market.” Their first foray into Fruit Logistica in 2015 was exploratory: this second visit as part of the AHDB/UK Trade and Investment presence has been cementing the relationships, giving greater understanding of the global position of the competition. AC Goatham have also attended the Asia Fruit Logistica show, viewing this as the place for some major growth potential. They said that it was very telling on the nature of UK horticultural businesses, that there were no other British growers to be seen.

My feeling was that if a British company wasn’t in Berlin it didn’t really matter. You wouldn’t have been missed because your potential global market place would know nothing about you. Those that were there are racing ahead.