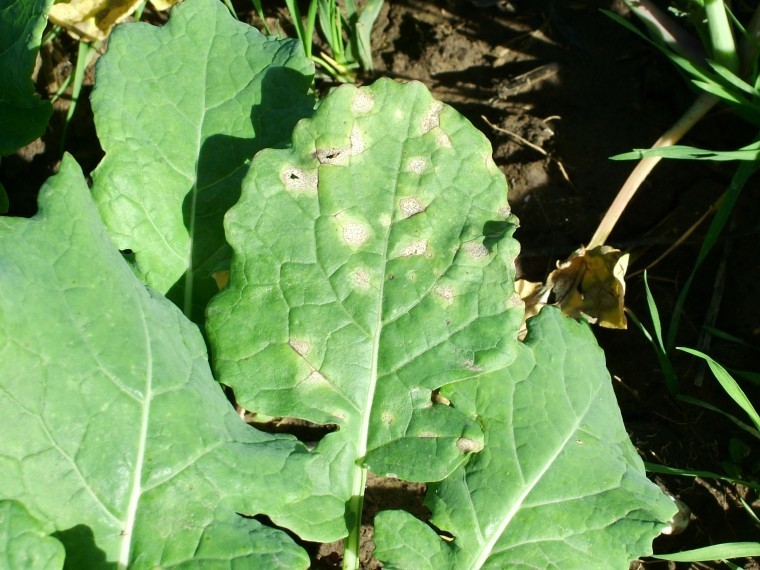 The updated light leaf spot forecast, which takes into account the deviation of actual winter rainfall from the 30 year mean, went live on the AHDB website in early April and suggests certain areas of the UK are at particularly high risk of light leaf spot this season.

Overall, the UK light leaf spot (LLS) risk has increased since the publication of the preliminary 2017/18 forecast last autumn. Cold and wet weather over winter have been ideal for light leaf spot since cold conditions slow oilseed rape’s growth and wet conditions increase LLS because it helps to distribute spores. The risk of plants reaching 25% of plants infected this spring has increased in the east from 13% to 16% and from 66% to 78% in the north of Scotland.

“Infection pressure is very high in all crops across northern England and Scotland.”

Mr Murray warns that light leaf spot cannot be eradicated once in a crop, so the focus has to be on protecting fresh growth to prevent disease spreading up stems to pods. “Once light leaf spot reaches the pods it’s very hard to do anything about it and will cause real problems.”

Light leaf spot affects all parts of the plant and can result in yield losses of up to 50% if left uncontrolled. Inadequate control also increases infection pressure in next season’s rape crops when infected air-borne ascospores are released from crop debris and stubbles at harvest.

Hutchinsons technical development director Dr David Ellerton says flowering sprays often focus on sclerotinia control, and while this disease can be equally damaging in bad years, outbreaks tend to be less frequent than light leaf spot. The latter is also no longer confined to northern areas and has been found across the UK when conditions are conducive.

“Light leaf spot occurs to different degrees every year and if the conditions are right there can be a bad outbreak almost anywhere.”

Curative treatments have little activity against either light leaf spot or sclerotinia, so well-timed protectant sprays are the only in-season way of reducing infection risk and protecting developing pods.

This should be supported with two flowering fungicides; the first of which is best applied at early flowering, followed by a second spray around three weeks later to safeguard crops throughout the flowering period, which typically lasts around six weeks, but varies depending on conditions.

Prothioconazole remains the strongest option against light leaf spot and should be applied at early flowering where the disease is prevalent on upper leaves and stems, Dr Ellerton advises.

Products containing other triazoles such as tebuconazole and cyproconazole also give light leaf spot control and offer some useful growth regulation, so may be another option, especially where the stem extension to green bud sprays have been based on prothioconazole, he says.

By the time crops reach mid-flowering, the focus switches to sclerotinia protection, however many products offer some light leaf spot protection as well.

Given the increasing levels of triazole resistance in light leaf spot, growers are advised to use alternative chemistry where two or more triazoles have already been used in spray programmes.

Mr Murray and Dr Ellerton favour products based on boscalid and dimoxystrobin, which offer activity against both key diseases and some physiological benefits on greening. Such actives can also be mixed with a pyrethroid for seed weevil/ brassica pod midge control if required.

They remind growers that sclerotinia sprays are purely protectant so mid-flowering fungicides must be applied before any infected petals have chance to fall and stick to stems or leaves, allowing the disease to transfer into the plant.