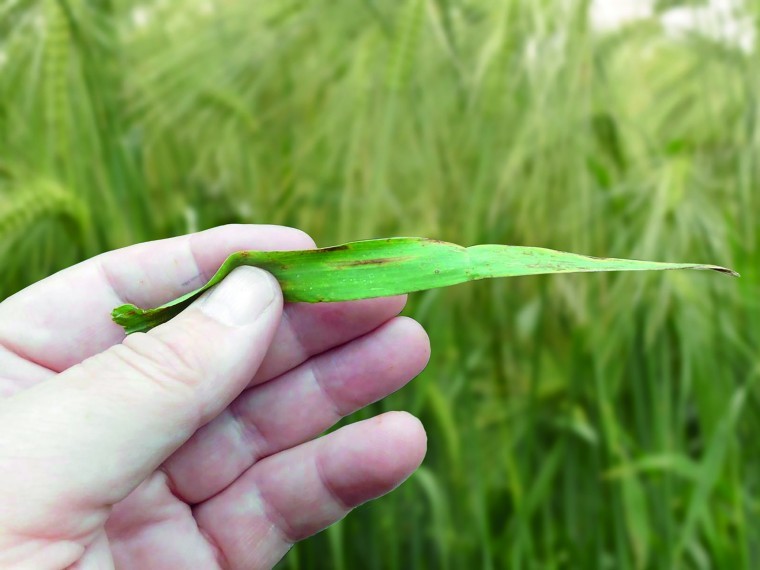 According to Syngenta field technical manager, Iain Hamilton, Ramularia collo-cygni, which can cause devastating losses in barley green leaf area and yield losses of up to 10%, was traditionally mainly a problem in Scotland. However, over the last five years, its grip has spread from the north of the UK to the south.

Infection starts from the seed, he says, though can also come from crop debris, with the disease then entering a dormant phase, only to be triggered later when the crop is put under stress, when it results in spotting symptoms on upper leaves.

“With no effective seed treatments against Ramularia, and variety resistance ratings not currently available, the multi-site fungicide Bravo (chlorothalonil) has become a mainstay for tackling it,” says Mr Hamilton, “especially following the reduced performance or resistance seen with other fungicide groups.

“Historically, Bravo has been applied as part of the conventional T2 fungicide spray at the awns emerging to ears emerged timing (GS49-59).

“However, new results from last season, where Bravo was used in winter barley with the SDHI-based fungicide, Elatus Era, showed a much greater Ramularia reduction was achieved on the top three leaves by spraying earlier than this – either at the flag leaf emerged timing (GS39) or when flag leaf sheaths were swollen (GS45).

“More significantly, these results were echoed by improvements in green leaf area by spraying at these earlier timings and, more importantly, by increases in yield.”

Based on the new findings, Mr Hamilton says growers should consider these earlier spray timings in winter and spring barley – either by applying Bravo at GS39 followed by Elatus Era as ears emerge at GS55-59; or by applying a tank mixture of Bravo and Elatus Era at GS39-45. The former approach may suit situations where late brown rust is expected, he notes.

“Bringing the Bravo spray forward from the traditional T2 timing fits with what we know about Ramularia,” says Mr Hamilton, “in that it is important to treat it before symptoms appear, since Bravo is a protectant fungicide it needs to be used preventatively.

“Usefully, applying Bravo at GS39 isn’t necessarily an extra spraying operation. An ethephon based plant growth regulator is often sprayed on barley at this time anyway.