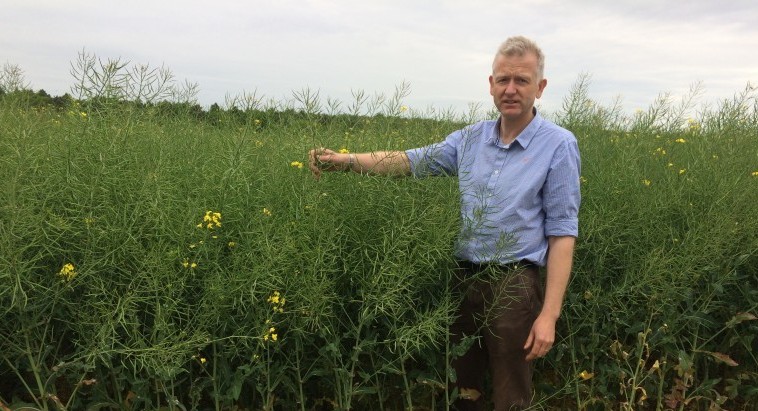 Many more farmers are trying out the new oilseed rape Clearfield system this year, in a bid to rid themselves of difficult weeds such as charlock, hedge mustard and runch or as a prophylactic approach to making sure the seed sample has well below the necessary erucic acid levels demanded in contracts. But some farmers are hesitant to step into this system because yields of Clearfield varieties are thought to be lower than non-Clearfield ones.

“That may have been the case in the early days of development but no more as the modern generation of Clearfield varieties have shot up in terms of yield,” says Neil Groom, technical director for Grainseed. “ In NIABTAG trials last year over three sites in Norfolk, Kent and Herefordshire, Grainseeds Aquarel CL was the top yielding Clearfield variety with a yield of 103% (4.26 t/ha with 4.68t/ha gross output) and Grainseeds Decibel CL (Coded ECG5005) was the second highest yielding variety with 102% (4.35 t/ha or 4.62 gross output). If growers want all the advantages of the Clearfield system plus yield, then they should be choosing either of these two varieties.”

NIABTAG conduct the only independent Clearfield trials providing members with truly independent data, these trials are now in their third year and Es Aquarel CL has been the top performing variety in their trials. In a NIABTAG trials in Norfolk in 2016 Aquarel CL yielded 4.3 t/ha or 104% of the site mean with a high oil content of 46.3%. Its Gross Output was 4.71t/ha which was ½ tonne better than some other varieties. Full results are available to NIABTAG members.

Neil goes on to explain that Clearfield is a unique system for oilseed rape that combines hybrid seed varieties and high quality BASF herbicides for an effective way to approach weed control. “Using conventional breeding techniques, varieties from a number of rape breeders including Grainseed have been bred to develop a tolerance to Clearfield herbicides. By applying these herbicides such as Cleranda (imazamox + metazachlor) and Cleravo (imazamox + quinmerac) post-emergence when weeds are at 1-4 true leaves, all weeds and volunteer rape can be controlled. This means growers can use Clearfield as a management tool, bringing fields back into rotation and allowing rape to be grown profitably where it would have been difficult or impossible to grow using any other system.”

Neil Groom says by growing Clearfield varieties such as Es Aquarel CL or Es Decibel CL, growers get the best of all worlds, benefitting from the advantages of Clearfield whilst growing a high yielding variety. “Growers also are much more aware and concerned now about erucic acid levels in rapeseed loads and it is thought that this may come from cruciferous weeds such as runch, wild radish, charlock and hedge mustard. UK and EU legislation sets a limit of 5% erucic acid in foodstuffs. These limits may be tightened in the future. At the moment growers face significant price penalties when oilseed rape loads are between 2% and 5% and crops may be rejected if over 5%. Controlling brassica weeds using Clearfield is the best way to avoid this potentially costly risk,” he says.

Neil also points out that Es Aquarel CL is very early maturing like Es Alegria (yet it still produces high yields with high oil content levels of 44.7%). This means the crop can be in the barn well before other Clearfield varieties, helping with heavy workloads at harvest and giving more time for preparation for drilling following crops and/or dealing with black-grass issues. It has high resistance to lodging (8); stem stiffness (6.3) and excellent multi-gene resistance to disease, with a 7 rating against Phoma stem canker and a 7 against Light Leaf spot. It has good autumn vigour, getting the crop off well before the winter closes in and good pod shatter resistance.

Es Decibel CL has excellent autumn vigour, increasingly important now that neonicotinoids are no longer available. It has a good disease resistance with an 8 rating for Phoma and a 5 for Light Leaf Spot, plus good resistance to lodging with an 8 rating, and 5.9 for stem stiffness. It has good yields and high oil content of 44.1%.