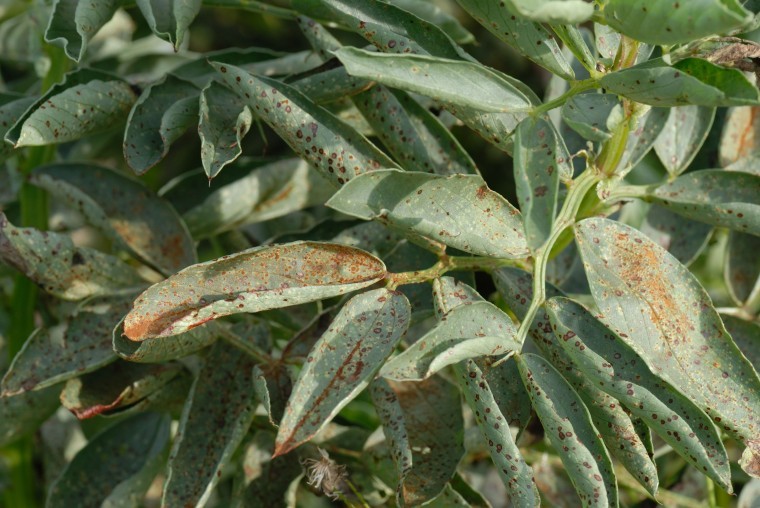 Humid weather is especially favourable to Chocolate spot development and, as the crop canopy density increases and spray coverage of the lower canopy becomes increasingly difficult, growers should be looking to prevent infections developing now.
“Last year, disease pressure was very high through June – with temperatures in the mid-teens, high humidity and showery weather. Not unlike our current weather pattern,” highlighted Simon. “Windy weather and repeated showers has also limited spray days and could stretch fungicide intervals again.”

He pointed out that currently crops are very variable in growth stage, with some crops only just receiving an initial fungicide at early flowering, whereas other crops have full flower and will be approaching their second application timing shortly.
Chocolate spot represents the highest risk, especially when temperatures are 15-20°C with relative humidity above 85%. In optimum conditions Simon reported the disease can develop rapidly, with infection occurring in less than 12 hours, and new infection appearing in less than 2 days. Leaf loss can reportedly reduce yields by up to 25%.

“Where disease is present such as Chocolate spot, Alto Elite will give moderate control of active disease and provide protection of new leaf,” he advocated. “The addition of Amistar will give the benefit of including an active with another mode of action – increasing protectant activity and improving control of some leaf spots, including Rust.”

Most effective disease control programmes have included Alto Elite at 2.0 l/ha at early flowering, with a repeat application two to three weeks later if disease is still active. The treatment also typically provides prolonged protection against Rust, if applied at first signs of detection.

“Where growers applied robust rates and were able to maintain the required interval between sprays disease control was good last year,” he added.

Simon reiterated that Cercospora was also more prevalent in field bean crops last year. Although risk is lower at present – since it is more active at temperatures below 15°C – the threat may appear in crops later in the season. There are no fungicide label claims for the disease, however, products containing chlorothalonil and triazoles have been seen to give control.

To counter the application challenges of dense crop canopies, Simon highlighted the application advice to use angled nozzles, fitted to alternate facing forwards and backwards along the spray boom. If windy conditions persist, he emphasised the need to slow down sprayer speed to 12 km/hr or less, lower the boom height to 50 cm and reduce operating pressure to two bar or less, to optimise the LERAP rating performance of nozzles where appropriate.