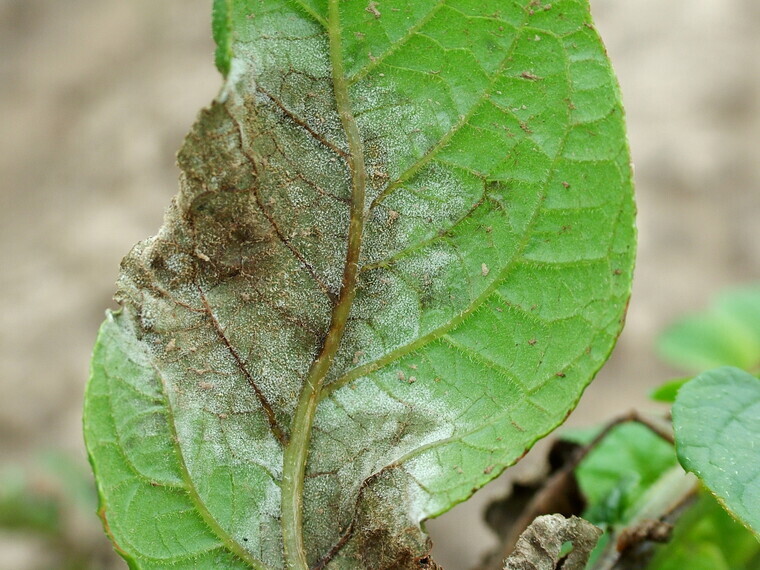 Much can be learned from the 2021 season, which also started very dry with low blight risk, but quickly turned into a big blight year, the firm’s root crop technical manager Darryl Shailes says. “It saw many crops carrying significant loading of potato blight, even where the best chemistry was used.”

The weather was a key factor in this turnaround, but it also coincided with an increase in the EU_36_A2 blight strain, which, according to AHDB recording, was prevalent across all but western England last year and dominated infections in eastern counties.

Data from crop protection company Belchim suggests EU_36_A2 has the ability to produce many more spores in a wider range of weather conditions than strains that have previously dominated UK blight populations, such as EU_13_A2 or EU_6_A1.

Another strain, EU_37_A2 has a similar capacity to 36_A2, and is also resistant to fluazinam, however, confirmed infections have declined with a reduction in the amount of fluazinam used across the industry, leaving it now largely confined to the West and North, Mr Shailes says.

“EU_36_A2 is also outcompeting it, which is common in the epidemics of recent seasons, when one strain tends to dominate field infection with very little mixture of genotypes being identified.”

However, he points out that last season’s AHDB monitoring did show an increase in the number of “other” genotypes found in Scotland, suggesting there may be some new, as yet unidentified strains being created by genetic recombination.

Mr Shailes urges growers to consider the changing nature of blight infections when putting together control strategies through the season, particularly as crops go through rapid canopy expansion to full canopy.

“In trials we always see the weakest programmes have the weakest start and cannot be brought back with very robust treatments later in the season. In recent seasons the epidemic has tended to be early in the season when crops are approaching full canopy.”

The strongest option with good systemic activity to protect rapidly growing canopies is benthiavalicarb + oxathiapiprolin, he says. Using it for the third or fourth blight spray, or earlier if necessary, is generally an effective timing, and in high risk situations, he recommends reducing the spray interval to seven days from the more normal 10. The actives can also play a useful role during any high-risk periods that occur once crops reach the stable canopy phase, he adds.

However, as with any fungicide programme, product stewardship is vital, so growers should use a range of different actives and alternate modes of action throughout the season, Mr Shailes says.

“There are various options available for different scenarios, so product choice should be discussed with your agronomist and tailored to disease risk, variety and other considerations, such as the need for controlling other diseases, such as Sclerotinia, Botrytis, or Alternaria.”

He cautions against the overuse of fluazinam, as this has potential to select for the resistant EU_37_A2 blight strain. Fluazinam still controls other blight genotypes so has a useful role to play, but it must be supported by tank mixing other strong blight actives. In addition, fluazinam has an important role to play for Sclerotinia, Alternaria and Botrytis management.

As always, it is vital to stay on top of any other potential sources of blight infection, notably potato dumps, or volunteers growing in heaps of stones or around the edges of fields. Last year showed wide joins and headlands can often act as infector sources, much like in a blight trial, thereby exacerbating blight pressure within the crop, he adds.

With uncertainty over whether there will be any industry Blight Watch type service, Mr Shailes concludes by urging growers and agronomists to sign up to Syngenta’s BlightCast (https://www.syngenta.co.uk/blightcast), to receive email warnings of predicted blight risk in the local area to provide another tool in the proactive defence against blight this season.