» Regional crop status from the field 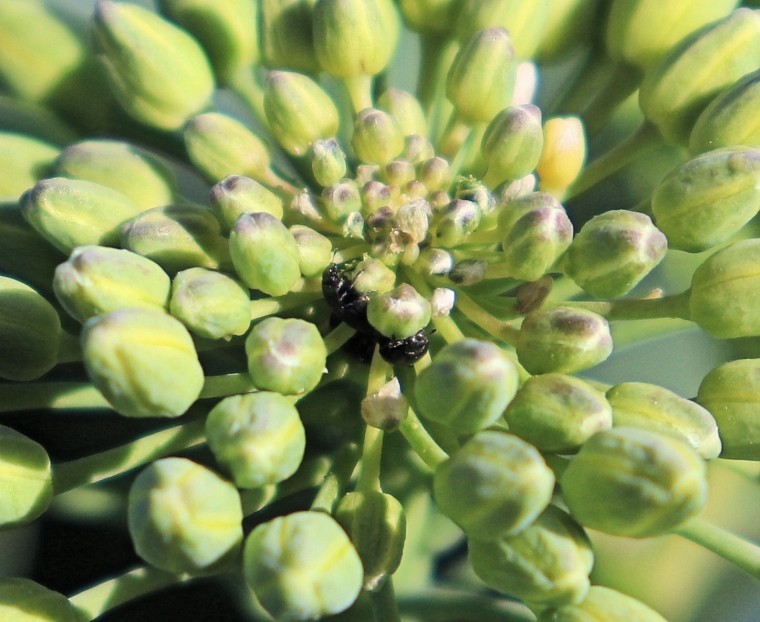 Oilseed rape crops across the UK are mixed this year. There are some big, forward crops, however, in certain areas of the country the high levels of cabbage stem flea beetles (csfb) in the autumn have, as BASF Agronomy Managers feared, led to serious problems with csfb larvae.

Crops in the south have been especially badly hit. Andrew Clune said, “A small % of crops were lost to adult damage in the autumn but the bigger threat that we have at the moment is the huge amounts of larvae, into double figures per plant. The larvae are moving into the stems now and where the stem is elongating you can find them in the top third of the plant. It’s not pretty. There have been a few people who have tried topping and grazing the crop, to see what level of control they might be able to get in order to have some knowledge for future years.

We are assessing some crops on a daily basis to inform management decisions. However, on a more positive note, for growers who decide their crop is viable, we do know oilseed rape compensates well.”

Across in Norfolk, prospects are brighter, Hugo Pryce said, “Oilseed rape crops in and around Norfolk are at a range of differing growth stages largely determined by drilling date and variety, with the most forward crops approaching yellow bud but there are no major concerns at the moment.”

In contrast, next door in Suffolk, Matthew Keane reports that oilseed rape crops are mixed, He said, “Some crops look good, they are growing nicely, they’ve taken the early nitrogen and Caryx (metconazole and mepiquat chloride) is being applied if the green area index (GAI) was above 0.8 just prior to stem extension.Nearly all crops were above this threshold and, even those that have been damaged by csfb larvae are are starting to grow away well. It is still worth putting Caryx on these plants to help the branching and rooting, Caryx can be applied , from the start of stem extension through to yellow bud. If you have csfb damage then all you can do is help the plant to get to harvest.”

Over in the west, the majority of crops were not affected by csfb or their larvae, however Robin Rose is closely monitoring pollen beetle numbers. He said, “We have quite a few pollen beetles in crops but I think because we are so close to flowering that it isn’t going to be an issue. Once there are a few yellow flowers open the pollen beetles will migrate to those because they can access the pollen so much easier. At that point they become beneficial as they are pollinating the crop.”

Rory Galloway said, “In Yorkshire the crops are relatively forward, at green bud and motoring on so we are going to need good lodging control. Now is the perfect time to put Caryx on.”

Dr Charlotte White, ADAS Crop Physiology Research scientist, said, “Growers are becoming more aware of how lodging can impact on yield but there should be a no tolerance approach to lodging. ADAS found in lodging experiments that even leaning to a small degree (22.5 degrees) at seed fill can have a significant impact on yield compared to no lodging. This is probably due to shading reducing the amount of photosynthesis.”

Lodging is driven by the size of the canopy, if the canopy is too large it is much more likely to lodge.

Dr White said, “To maximise yield growers need to manage their canopy from the beginning so when they are planting, aiming for 30-40 plants /m2. The rest of the canopy management is all about nitrogen timing and plant growth regulator (PGR) applications. Applying PGRs manipulates the canopy, decreasing crop height and changing the dominance from the primary stem through to the secondary stems, so encouraging secondary branching and giving the canopy a better shape for light interception.

A GAI of 3.5 at flowering gives the best ratio for light interception as you don’t have bare ground and all the light will be hitting something green but equally importantly the canopy isn’t too large so that you are not “wasting” any light from reflection.”

With fine spring weather the workload on farms has picked up and growers are in the midst of applying the T0 sprays to their winter wheat crops, which are full of potential and, in some cases, also full of Septoria. Here BASF Agronomy managers give a roundup of the winter wheat in their areas.

In the west, Robin Rose said, “The forward, early drilled crops are frothy, because plants have just grown and grown. In terms of plant growth regulators (PGR), just do what you normally do with the PGR but keep the programme to 21 days. Plan to put two doses of PGR on and if need be, maybe three but you need to get the early ones on. At GS 30, growers can apply 0.3-0.4l/ha Canopy (prohexadione-calcium + mepiquat chloride) or 0.3l/ha Medax Max (prohexadione +trinexapac ethyl).

We have lots more Septoria than we have seen for many a year and a lot more mildew, there has been no hard winter to curb the lush growth and it has allowed disease to go mad. Most people will be targeting both of those with their T0, basing it around chlorothalonil and a specific mildewicide.”
Septoria is readily found throughout the country and, in East Anglia, Matthew Keane said, “Septoria is there on the lower leaves, the amount varies between varieties. The weather is the unknown variable; who knows what the weather is going to do between now and the T1 timing. If it is wet there is enough Septoria there for it to spread up through the plant.

Crops have to be assessed for the T0 application on a field by field basis as it is very very easy to go too early, leaving the crop very open from here to T1. Growers want to keep the gap as short as possible, not more than three weeks, but equally do as much as they can by dampening down disease at T0. Growers are aiming for leaf 3 emergence with T1 but if you have gone too early at T0 it completely runs out of steam and the effect of it is lost before T1. It’s almost working backwards from when the T1 is likely to be, which in this area will be around the 21st-28th April while also bearing in mind when you drilled the crop and what variety it is.”

Further north, in Yorkshire, some growers have done the T0 spray quite early and Rory Galloway said, “It will be very important to watch that the interval between T0 and T1 isn’t extended too much.”

He added, “In my area there are a lot of chalk series soils which can be deficient in Magnesium so growers carefully monitor for deficiencies with a growing number of them using tissue testing.”

Dr Sarah Kendall, ADAS Senior Research Scientist said, “Some of the conclusions from the ADAS Yield Enhancement Network (YEN ) have been about the importance of attention to detail ; monitoring and measuring your crop and looking at how it progresses throughout the season.

This year YEN is facilitating the offer of leaf tissue testing by YARA at Lancrop Laboratories to entrants. This will provide some understanding of the nutrient profile of their crop through the season. This data will feed into the YEN database, along with the nutrient content of the grain and agronomy information to help build understanding.

If tissue testing results show a deficiency then it is good to appreciate that this represents a snap shot of the crop, and to follow that up with a soil analysis after harvest. Detecting deficiency symptoms can be complicated, and easily confused. If a deficiency is suspected, then considering the crop type, soil risk factors and results from soil and tissue tests in combination is a useful way of looking at it. Depending on the time of diagnosis, an application of foliar feeds can help, but may be too late if symptoms are already present.

Because of the name, micronutrient, it is often thought that these nutrients are less important than major nutrients. However, they are called micronutrients because the plant only needs a small amount. They are essential for plant growth and development so where there is a deficiency this can be problematic. In terms of yield, it is important that the plant does have access to the right amount of each micronutrient.”