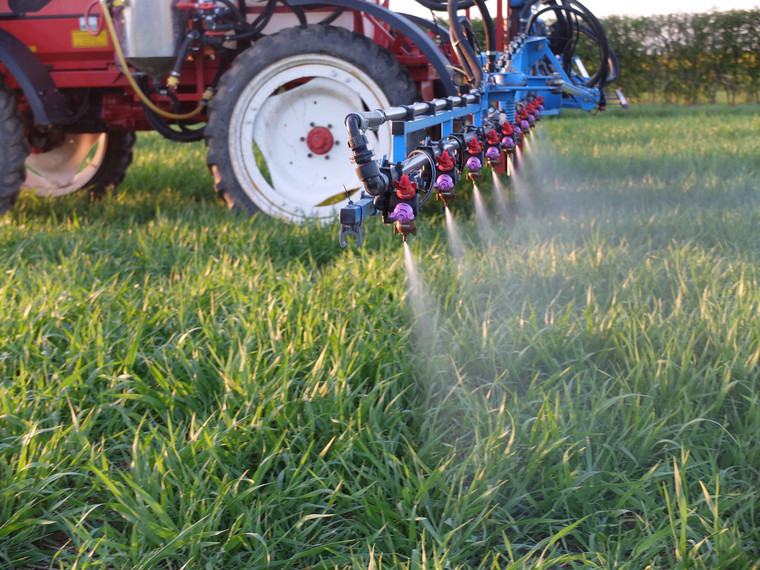 But if spraying conditions require ’increasing’ to 90% drift reduction nozzles, then higher water volumes will be needed to compensate, results suggest.

Conducted last season in response to growers having to focus increasingly on ways of reducing spray drift, the work showed that yield from a flag leaf (T2) application of the SDHI fungicide Elatus Era was boosted from 8.25 to 9 t/ha when applied through 75% drift reduction Amistar nozzles, compared with conventional flat fan nozzles.

Yield with the Amistar nozzles, which are also known as Guardian Air nozzles, also remained at 9 t/ha irrespective of whether a typical water volume of 100 l/ha, or a higher water volume of 200 l/ha, was used.

However when 90% drift reduction nozzles were used at the traditional 100 l/ha water volume, yield fell by over 0.5 t/ha compared with the conventional fan nozzles. Only when water volume was doubled to 200 l/ha did yield climb back nearer to the 8.25 t/ha of the conventional nozzles.

Mr Thomas says the coarse droplets produced by nozzles that reduce drift the most are good at getting the spray down into the cereal canopy, rather than being blown about. However, coarser droplets tend to produce reduced coverage of the spray target than finer droplets, he says, so higher water volumes are needed to compensate.

“Although spraying in 200 l/ha rather than 100 l/ha of water can mean 30% fewer hectares are sprayed per day, due to more frequent fill-ups, using 90% drift reduction nozzles could mean the difference between being able to spray on a given day or not. At T2, for every day that disease control is delayed, it is worth remembering that wheat yield can decline by 70 kg/ha.”

This guidance for a higher water volume with 90% drift reduction nozzles was underlined in further testing at T1. In this work, applying a mixture of an azole and the multi-site fungicide folpet in anything less than 200 l/ha of water resulted in poorer yellow rust control than conventional fan nozzles at 100 l/ha of water, Mr Thomas notes.