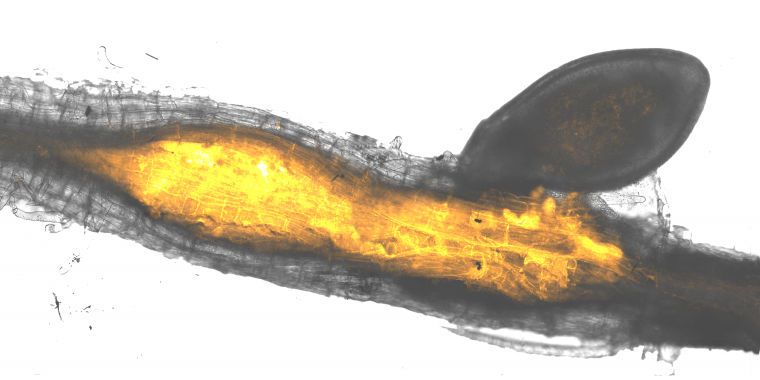 Now an international research collaboration led by the University of Dundee and the James Hutton Institute has detailed the genome sequence and inner workings of the yellow potato cyst nematode (PCN), giving scientists new insights into how it can be stopped.

“This is an exciting discovery which reveals the potato cyst nematode’s ‘parasitism toolkit’,” said Dr Sebastian Eves-van den Akker, of the University of Dundee’s Division of Plant Sciences, based at the James Hutton Institute.

“Once we had sequenced the genome of the nematode, we uncovered a hidden genetic code, or signpost, that points towards the molecular tools the nematode uses against plants. We believe this genetic code is actually how the nematode categorises which genes it needs when infecting plants so, in a way, we can use their own signpost against them.

“Using this information we will now be able to much better target how we can prevent nematode infection.”

The results of the research are published in the journal Genome Biology, and like all science funded by the Biotechnology and Biological Sciences Research Council, are freely available for everyone to read. The paper can be read here

Potato cyst nematodes are devastating to crops and are exceptionally hardy: once established in a field, PCN are effectively impossible to eradicate in the short term, and because they persist as long-lived cysts in soils, growing potatoes may not be economically viable for up to two decades.

The US Department of Agriculture (USDA) has classified the yellow PCN as potentially more dangerous than any insect or disease affecting the potato industry. Substantial effort is already invested into keeping land free of PCN; both species are present on USDA and European Plant Protection Organisation quarantine organism lists.

All major crops are thought to be infected by at least one species of plant-parasitic nematode, which cause damage valued at over $80 billion each year.

“Nematodes are the hidden enemy to crops,” said Dr Eves-van den Akker. “Thousands of these microscopic worms can infect a single plant, and there can be several million in an infected field. Given that they live hidden in the soil and attack the root, they have a devastating impact on the rest of the plant that is hard to recognise.”

Now researchers have found the toolkit for the potato cyst nematodes, the aim is to carry our similar analyses in other nematodes. There are currently very few pesticides available which can deal with a nematode infection, as most of them have been withdrawn for various reasons. So there is a pressing need to find new ways to prevent crop infection, particularly given the increasing importance of potato as a major food staple around the world, including in China.

The vast majority of plant-parasitic nematodes feed on plant roots, meanwhile `injecting’ the plant with a variety of destructive proteins and plant-hormones.

“If we can target these areas of the nematode’s activity then we will be better able to stop it,” said Dr Eves-van den Akker.