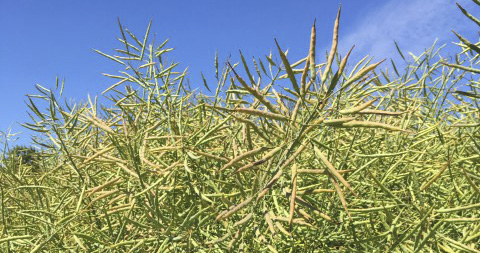 Oilseed rape crops may have been delayed by the cold winter and spring, but a short flowering period and recent dry weather means they have almost caught up, according to DLF Seeds.

Business development manager Clive Sutton has been travelling the length and breadth of the country examining trials sites, and reckons harvest won’t be far behind normal. “I’ve been looking at our two new varieties; Broadway and Elevation – which are new to the Recommended List this year – and comparing them to other crops in official trials,” he explains.

“While they had a late start, most crops have caught up now and there isn’t a lot of rain forecast for July, which should bring harvest forward to a more normal time. The weather has been a real leveller – most varieties look pretty similar, with the main differences being pod size and architecture.”

Dry weather during flowering allowed for excellent fertility and pollination, so the yield potential is extremely good – providing there is sufficient rain between now and harvest to allow the seeds to swell, says Mr Sutton. “Unless you can irrigate it will be in the lap of the gods. But those varieties with large pods and a large number of seeds per pod – like Elevation and Broadway – will always have better yield potential. An extra 1g in thousand seed weight equates to an extra 15-20% in yield.”

In southern England, the flowering period lasted around two weeks, while in Scotland it managed three and half weeks against an average of five and a half weeks in a normal year. “This means a lot of late flowering varieties finished prematurely, so have fewer pods,” explains Mr Sutton. “Most crops are also shorter than normal. But they look extremely well – Broadway is looking better by the week. I’m very pleased with the way both varieties are looking and am pretty confident we’re going to get good results from the trials.”

Oilseed rape also has an extraordinary capability to compensate for difficult conditions, he adds. “Those crops which are shorter will allow more light into the lower canopy which will benefit pod fill. It also means they should be easier to combine, and could be combined direct rather than swathing, to save on harvest operations.”