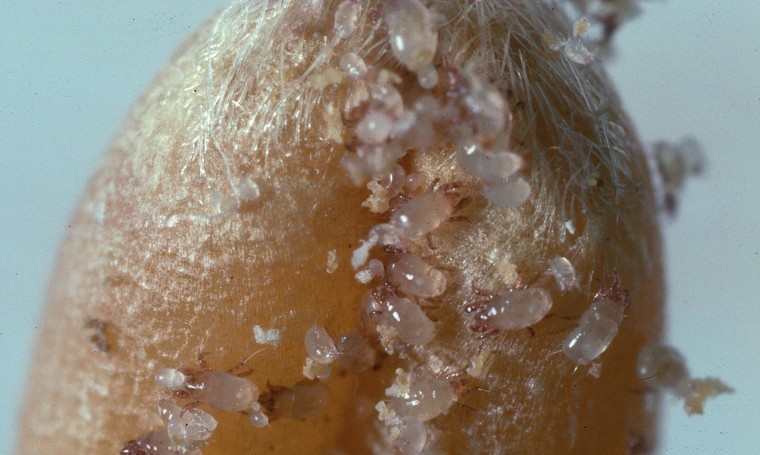 Poor store hygiene can lead to mite and pest attacks of stored grain, which spoils quality, can lead to between 5% and 10% total crop loss or even lead to complete crop rejection. “With control measures starting up to one month before harvest, now is the time to plan what action to take and put Reldan 22 on your list of required products. Growers need to maintain grain quality and yield in store so that they make as much profit as possible,” says Peter Waite of Dow AgroSciences.

“It is important to protect the investment made in the crop thus far as the grain is harvested and moved from field into store. Mite and pest infestations result in significant direct losses due to their feeding. Grain quality is adversely affected, with problems of reduced nutritional value, taint and contamination by insect fragments. Mites give rise to mould infestations as moisture and heat in the grain heap increases. Mites and other storage pests also act as sources of allergens, fungal infections or bacterial infections leading to difficulties when feeding animals,” he says.

Peter reminds growers that various species of mites, weevils, beetles and moths are frequent problems in grain stores and grain heaps. “Saw-toothed grain beetle and flour mites are the most commonly occurring pest species in grain, yet some insecticides have no effect on mites at all. Working by contact, ingestion and fumigant activity, the acaricide and insecticide Reldan 22 (based on chlorpyrifos-methyl) controls all major pests of stored grain. In fact it is the only pre-harvest grain store fabric treatment that controls the three main mite species – the flour mite, Cosmopolitan food mite and Copra mite.”

Mites are very small and difficult to see. They are not easily distinguished with the naked eye from dust. One of these pests’ characteristics is their amazing ability to reproduce. The AHDB say that the flour mite (Acarus siro) which feeds inside of the grain, can multiply seven fold in one week and the Cosmopolitan food mite (Lepidoglyphus destructor), which lives on the grain surface and in debris, can multiply 4 fold in one week. Unsurprisingly it has been calculated that you can get several million mites in 1kg of stored grain.

Reldan 22 is best used as part of an integrated management approach to treat the fabric of the store. This process starts by completely emptying stores of old grain or any debris. Any handling equipment such as airways, ducts, intake pits and elevators should be swept or cleaned using a high pressure airline, paying attention to cracks and crevices where pests and dust is harboured. The sweepings need to be disposed of well away from the grain store site or be burnt. Traps can be set to gauge pest levels.

“There are several application options for Reldan 22 – by knapsack sprayer or by tractor-operated spray lance. The product is applied at 200 mls in 5 litres of water per 100 square metres when treating the fabric of the store. It should be applied up to 4 weeks before harvest. One treatment is allowed. There is no withholding period and it can give up to 6 months protection of the store.”

“It can also be used on harvested grain coming into store as grain treatment. In this instance Reldan 22 is applied to the grain that has been dried, cooled and cleaned at 20 ml/tonne using a suitable applicator to grain. After this admixture treatment, grain should not be processed for 90 days, so this approach is most suitable for grain intended for long term storage. Just one application can be made per batch. A new recommendation for 2016 is a reduced dose rate of 10 ml/tonne which has no withholding period. So this means that Reldan is now suitable for grain expected to be sold out quickly from store as well as for grain intended for longer storage, allowing flexibility when markets fluctuate.”

Peter Waite explains that Reldan 22 is approved for use on grain store structures and equipment as well as on stored grain heaps of wheat, barley, oats, rye and triticale. “It is accepted by the British Beer and Pub Association (BBPA) and the Brewing Research International (BRI) for use on cereals for malting and brewing.”