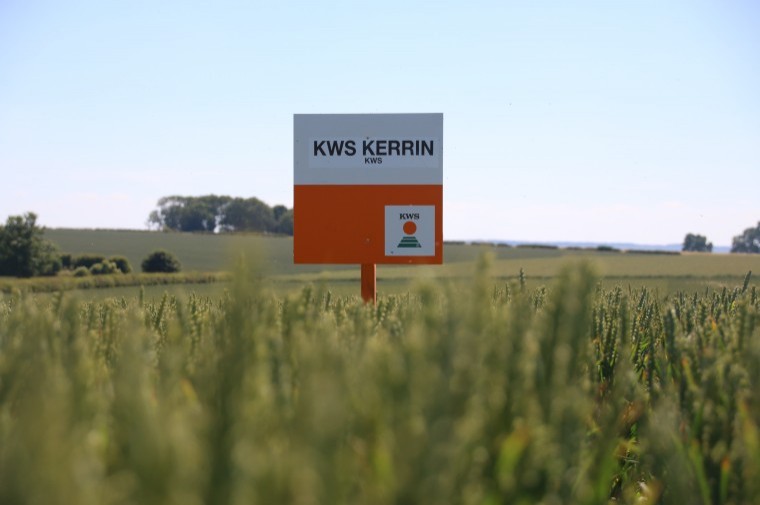 William Compson, KWS sales manager said: “KWS Kerrin delivered an exceptional performance in Agrii’s 2018 National Variety Trials, achieving the top position at both Swindon and Yorkshire sites* with 110.2% and 105.6% of control varieties respectively. It also out-performed the control yield variety group by 4% in recent AHDB trials, illustrating that this hardy feed variety has the resilience to take whatever the season brings.

Andy Clark of AS Clark and sons in Saffron Walden agrees: “We averaged 9 t/ha of KWS Kerrin this season, grown in less than ideal, gravelly conditions, and yet it performed well despite the recent heat wave.

“We specifically grew KWS Kerrin for the Allinson Mill in Bishops Stortford. They wanted a low hagberg wheat flour that wouldn’t rise, ideal for producing flat breads and wraps. We started with 20 hectares grown for seed in 2016-17, and increased our area grown to 135 hectares for market this season.”

Jeremy Squirrell of K E Knock near Stowmarket in Suffolk, who has grown KWS Kerrin seed crops for the past two years said: “Kerrin ticks the boxes for me. It’s got good grain quality and is resistant to orange wheat blossom midge (OWBM), which was a big issue for me this year. It also has a good disease resistance profile and is a reliable all-rounder.

“This year it yielded 9.3 t/ha and has performed well as a second wheat, giving me more rotational choice and greater flexibility.”

Peter Clappison, from East Riding in Yorkshire, grew KWS Kerrin for the first time this season, following a recommendation by Gleadell.

Peter only grows feed wheat and generally sells into Frontier Agriculture as well as a local biomass plant, in autumn 2017 he put in 14 hectares of KWS Kerrin as a first wheat following barley. He said: “Despite the long hot summer Kerrin performed well and yielded 8.5 t/ha, I will be growing it again next year.”

William Compson, KWS sales manager adds: “KWS Kerrin has stood up exceptionally well to challenging weather this season, and performed well in both light and heavy soils. Its robust disease resistance profile has helped to protect yield, while resistance to sprouting has helped preserve grain quality.