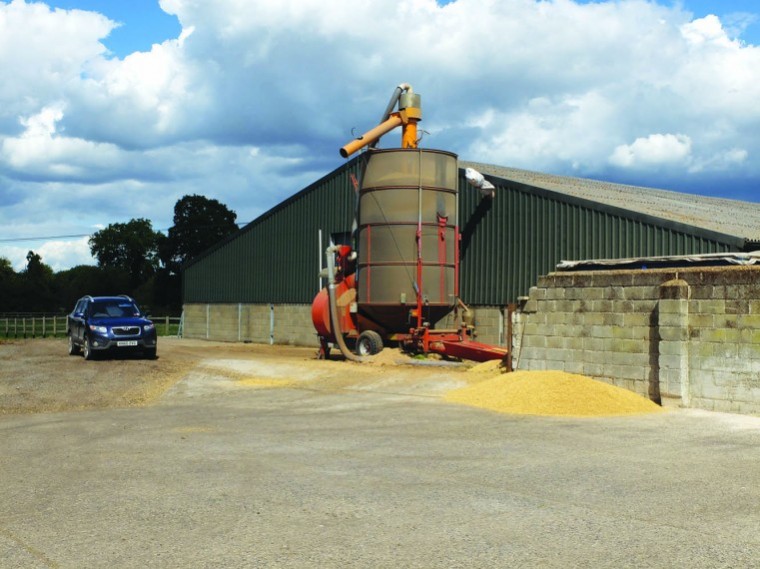 “We have never before finished wheat in July,” said Alan Randall, who farms with his son, Andrew. The spring oats are finished, a small area of spring barley has been done and only some spring beans were left by 19 August.

“We are totally up to date with combining and only had to dry one field of wheat because it was not properly ripe but it was convenient do to it when we were there. That is pretty unheard of,” Andrew Randall said.

That was 25 acres out of 400 acres, so 1,500 tonnes were harvested without drying. A decent combine size to get on the land when the weather is right had made all the difference, the Randalls insisted.

The farm has a small mobile dryer which is adequate in a bad year. This year, the farm has harvested 400 acres of wheat, just over 300 acres of oilseed rape, 150 acres of oats, 70 acres of the Randalls’ own barley, 80 acres of someone else’s winter barley under contract and 12 acres of beans.

“It is quite convenient that that contracting is winter barley because in theory it does not clash with our wheat, which is predominantly milling. We do not want too many delays on that in a normal weather year.”

In the last couple of years, the Randalls have used Openfield for milling wheat contracts to supply Warburtons, the baker. Although the Randalls have not been so successful at protein levels this year, they are expecting a reasonable premium for the wheat because of the general lack of milling wheat – caused in part by a wet harvest in France and Germany which has scuppered their wheat quality. “At least we have some protein and a good Hagberg,” said Andrew Randall.

The rape has been done on three different harvest pools this year to try to spread the risk a bit. “That was just as well because the range in prices is quite staggering. Some people have got it right and some have got it desperately wrong which is very frustrating.”

On the spring oats, the Randalls are trying to grow for the coeliac disease market so there is no tolerance of wheat or barley contamination in it. “We like to think we have found a little niche there.”

Read a profile of Randall Farms