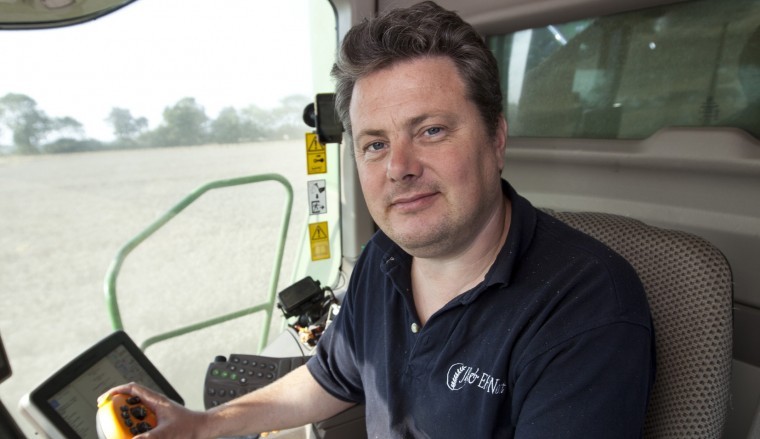 He finished his exams as one of the highest achieving candidates in 2015 and earned the BASIS Farmer of the Year Award, sponsored by Bayer CropScience.

James is the owner/manager of JR & EH Nott, an established family-run partnership based in Gestingthorpe, north Essex. He currently farms 1,000 hectares of a mix of family-owned, tenanted and contract farmed land. Cropping is predominantly combinable, including wheat, barley (malting and feed), oilseed rape and beans, plus around 40 hectares of sugar beet.

Following his successful completion of the BASIS Foundation Certificate in 1997, it was time to take on the full BASIS Certificate in Crop Protection. The course provides training and certification for sellers of agrochemicals and those giving advice on their use in agriculture, such as agronomists, advisers and farmers.

He said: “I have always wanted to do my BASIS Certificate, but until recently I just didn’t think I had the time. The Foundation gave me a good insight, and with my interest in agronomy, the full course was the next natural step.

Though the business employs two agronomists, James has been actively involved in the decision making process for many years.

He said: “Sometimes I’ve had different ideas to the agronomists, or I’ve wanted to challenge the decision, often when I looked more closely at the costs. It could sometimes be difficult to do that when I didn’t have the qualifications to back me up.

“Now that I’ve got my BASIS Certificate I’m looking forward to being confident in making more decisions, but I’m not planning to do the entire farm’s agronomy, I still think it’s important to draw on the advice and knowledge of others. However, I have just taken on a small farm which doesn’t warrant the cost of an external agronomist, so I’m looking forward to doing it myself in 2016.”

James feels that the knowledge gained from the course was invaluable. He said that understanding why you are giving advice and the legislation behind the industry is fundamental, along with an appreciation of the wider integrated crop management considerations and the data contained on a product label.

“Before making a recommendation it teaches you to go through a thorough process to assess the best option and scrutinise why you are making it.”

At 45 years old and with 30 years of practical experience on the farm, James was one of the oldest candidates on his course; something he felt gave him a distinct advantage over his younger classmates.

He said: “I’ve seen the cycles of farming fashions over the years and I’ve done the day to day agronomy. This definitely helped me quickly get to grips with much of the course material. BASIS isn’t something you can learn from a text book, you need to develop a depth of thought, reasoning and get some practical experience for it all to fall into place.”

He praised his trainer, Debbie Wedge, from the Chelmsford & West Essex Training Group, for the quality of her teaching and for the exam preparation, including the mock exams, which he found very useful.

James’ project, a requirement for the qualification, was on ‘Mycotoxins in wheat and the effects of future legislation on its control in the UK’.

He said: “I wanted to do something different. Everyone seemed to be looking at blackgrass or flea beetle and I thought the issue of mycotoxins might be interesting.”

The project investigated the impact of new hazard versus risk legislation on the future availability of fungicides to control fusarium ear blight, which produces mycotoxins. James concluded that triazole fungicides could be banned in the future under the new legislation, which could make it difficult to control fusarium on wheat. A resulting increase in mycotoxins could present a food safety issue far greater than the original hazard posed by the fungicide.

James’ advice to other farmers thinking about taking the BASIS Certificate in Crop Protection is to keep up to date with farming matters, and spend time talking to agronomists and other farmers. Ask ‘why’ something is being done and don’t be afraid to challenge the accepted method. Getting a wider understanding is fundamental to building a broad depth of knowledge.

Of his award win, James says: “I’m really pleased to have been awarded Farmer of the Year. I feel proud of the work I put into the course and project.

“Holding the BASIS qualification really adds to what I can offer to my contract farm customers too, so it’s good for my business as well as me personally. I’ll certainly be keeping my CPD (Continuing Professional Development) up to date and will actively be involved in the decision making on the farm. I’m looking forward to starting my FACTS course in January 2016.”

Stephen Jacob, acting CEO of BASIS said: “We’re delighted that James was selected as winner of the Farmer of the Year Award. His passion for agronomy and farming is clear, and that came across in his approach to the course, his exam, and the work he put into his project. We look forward to seeing him complete his FACTS exam in the near future.”