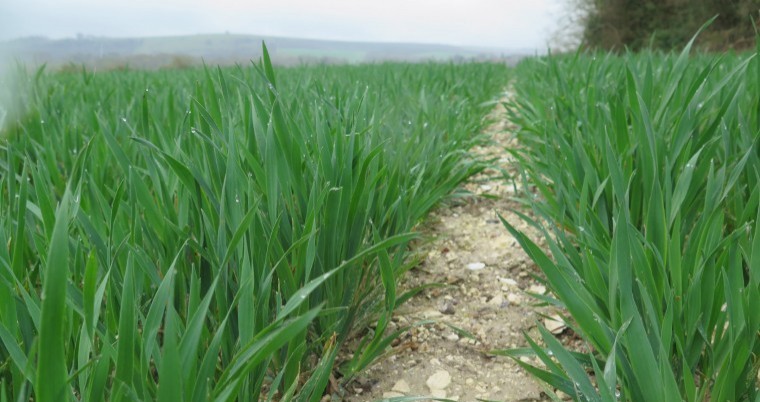 Cereal crops have, for the most part, come through the benign winter well. But, without the strong autumn growth seen in recent seasons, most still have relatively small root systems, reports Syngenta field technical manager, James Southgate.
The imminent surge in spring growth is likely to concentrate the plant’s energy in green leaf biomass production, and if roots don’t keep pace there is an increased risk of lodging, more severe impact of summer drought effects and lack of nutrient uptake to drive yields, he warned.

“The effect of smaller plants with shallow rooting is is most pronounced on the extended area of later drilled crops, where planting was delayed to allow for more black-grass control,” James added. “The plants all look really well, but it will be crucial to develop root structures as quickly as possible now to support high yield potential.”

He advocated growers stimulate bigger root mass structures with Moddus PGR treatments at the earliest timings. “We have consistently seen, with trials and growers’ own experiences, that Moddus at T0 is so important to increase root size and depth.
“Greater rooting enables the crop to better utilise applied nitrogen and other nutrients to develop yield, as well as scavenge for soil moisture more effectively, that gives plants resilience against drought stress,” advised James. “Furthermore, with the increasing biomass and heavier ears of higher yielding crops, the larger root mass encouraged by early Moddus treatments acts as stronger anchorage to reduce the risk of lodging.”

Syngenta trials in Nottinghamshire last year demonstrated untreated wheat plants at harvest could be pulled out with just 46.1 Newtons of force. However, plants treated with Moddus at 0.15 l/ha plus 1.0 l/ha of chlormequat at the T0 and T1 timings required six times as much force – 274 Newtons – to dislodge them. The Moddus-based programme gave a 17% improvement over chlormequat alone.

Cotswold grower, Toby Hogsbjerg, targets developing root mass as a key priority for early spring agronomy. He manages Swinburn Farm’s 1000 hectares of arable cropping, which is predominantly grown on thin Cotswold brash and, at 600’ above sea level, can be exposed to harsh weather conditions.

That has helped keep crops compact and healthy over the winter, but he’s now looking to develop root growth as soon as possible, Toby reported. “This year all our winter wheat has gone in to min till or direct drilled, and everything is looking pretty good.

“Early drilled crops, after rape, are looking plenty lush enough, having picked up residual N, but later drilled second wheats are going to need a good pick-me-up,” he added. “With just six to eight inches of topsoil we need to develop big root structures.”

Toby’s standard wheat PGR strategy is predominantly Moddus at T0, followed by a Moddus or Moddus plus chlormequat at T2. “This year, for the first time, all of the barley is hybrid – so for that we will be following the variety recommendation for PGR use, particularly for the rooting because of the soil and the hybrid height,” he added.

James Southgate of Syngenta pointed out research has shown that Moddus is particularly well suited to early spring T0 application, with faster uptake by plants in cool conditions ensuring crops will be encouraged to produce roots and regulate stem extension.

He highlighted that for the past two seasons, prospects of early spring growth had been dashed by unseasonably cold spells through the end of March and April.

The studies showed that at a temperature of 7°C, typical of UK conditions at spring T0 timing, 70% of the Moddus had been taken up within 15 hours, whilst it took 55 hours for the same uptake of chlormequat. The study proved that Moddus would be safely in the leaf in case of rain and, if temperatures are once again cold and slow this spring, that the PGR effect will still be gained.

“To track crop development across the UK this season, we are encouraging growers to share their experiences of inspecting crop growth stages and Moddus application timing, by posting pictures on Twitter: #coolmoddus,” he added.