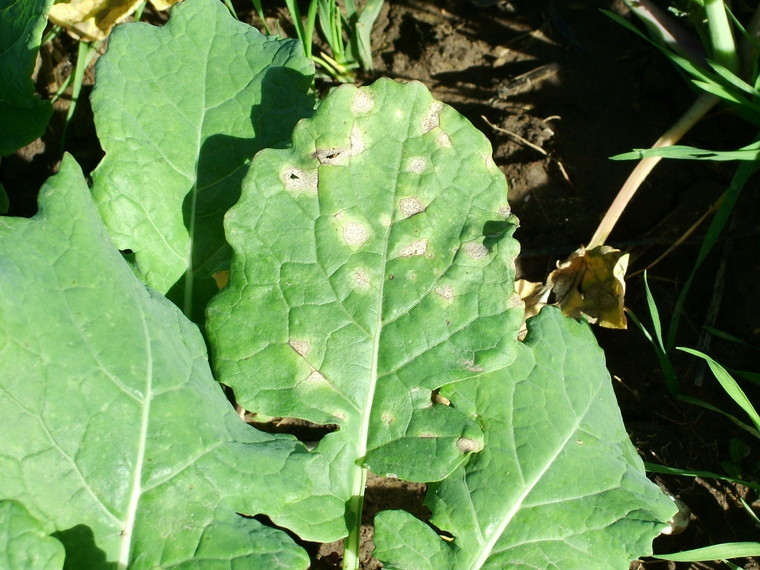 Phoma is a disease that comes from the debris and stubble of the previous year’s crop – and can cause losses of up to 0.5t/ha.

To help decide fungicide timings in the autumn Phoma risk forecasts are available from the AHDB, which are based on incidence of Phoma canker in 2021 and temperature and rainfall from 1 July to 26 September.

Phoma spores need 20 days or more rain from August 1st in order to mature on stubble. More rainfall than this then causes release of mature spores, which are then able to infect the crop – if there is a minimum of 4 hours leaf wetness.

From infection, it takes an accumulated mean temperature of 120 day degrees (i.e. 6 days at 20˚C, or 10 days at 12˚C) for a mature spore to produce the characteristic leaf spot, from which the mycelium will migrate down the petiole of the leaf and into the central stem.

At low temperatures, this migration may be only 1mm per day but it is essential to control the disease before it reaches the stem, as control then becomes almost impossible and stem cankers will result later in the season.

In early September, conditions are relatively dry, so there is a relatively low phoma risk across the country although future risk will depend on how much further rainfall is seen through September.

Dr Ellerton advises regular monitoring of crops, particularly early sown crops, rather than relying on waiting for the forecast which is only an indication of the beginning of Phoma infections and may only be available after infection has started.

Fungicides should be applied once crops have reached a threshold of 10-20% of plants infected with Phoma leaf spot and the risk forecast will merely indicate when this is likely to occur for your region.

Another consideration is the often large difference in growth stages between crops particularly with the wide variation in drilling dates, differences in seedbed moisture and subsequent variation in emergence date.

Later drilled smaller crops will be more at risk of Phoma reaching the stem and so a threshold of 10% plant infection would be more appropriate rather than 20% for larger crops. They should also be prioritised when deciding order of fungicide applications particularly if the variety is more susceptible to Phoma.

Clearly fungicide programmes should be influenced by varietal resistance as found in the AHDB recommended lists. The 10% threshold should be applied for the more canker susceptible varieties such as Crome & Crocodile (4). On the other hand more resistant varieties such as George (9) & Croozer, DK Exsteel, Dazzler, Darling, Respect, DK Expectation & DK Imprint CL (8) are less at risk and a 20% threshold should be applied, as well as being of lower priority when it comes to order of spraying.

Issued each autumn by the AHDB, the preliminary Light Leaf Spot (LLS) forecast shows the proportion of the oilseed rape crop (disease resistance rating of 5) estimated to have more than 25% of plants affected by LLS in spring, for the current season, in 10 regions across the UK.

It’s important to recognise that the forecasts should only be used as a guide to risk levels. As local risk varies, crops should be inspected regularly on a field-by-field basis. To provide the strongest risk assessment, plant samples should be put in polythene bags and kept at 10 to 15 degrees C for around five days to bring out symptoms.

There is no threshold for LLS in the autumn and sprays should be applied at first sign of the disease.

Recent work from AHDB has shown that programmes based on prothioconazole are very effective at controlling Phoma and increasing yield while straight tebuconazole often gives poorer control and yield response.
However previous AHDB work has indicated that products containing a combination of both prothioconazole and tebuconazole can outperform straight prothioconazole.
Where more growth regulation is required, use a higher ratio of tebuconazole. Addition of bixafen will boost control of both Phoma and Light Leaf Spot. Application of tebuconazole based products in the autumn will affect what can be used in the spring.

Products containing metconazole are strong growth regulators but are generally weaker on disease control, particularly LLS. Where disease pressure is relatively low or there is an early attack of Phoma, difenoconazole may be considered, although this is weak on LLS so is more appropriate as the early spray for Phoma in a planned two-spray programme. Addition of azoxystrobin to difenoconazole will improve LLS control.