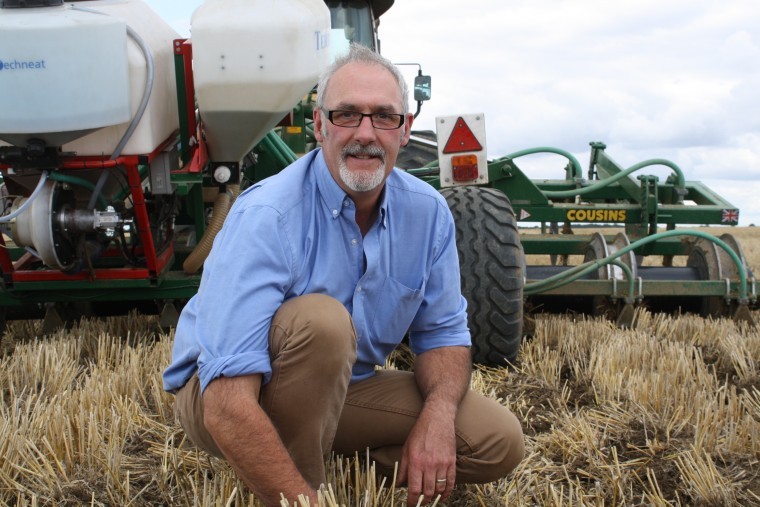 Seed quality is important in getting the crop off to a good start, so growers are reminded not to use seed from Glyphosate desiccated crops, as reduced vigour is seen in these seeds and germination could be impaired, says Mr Neale.

“Seed rate is an important consideration; seed bed conditions and slug populations are the two biggest influences on emergence and plant survival so these two parameters should most influence the choice of seed rate. Established plant populations from 15-65 plants/m2 have very limited effect on final yield.

“It’s important to remember that whether the variety is hybrid or conventional, the back ground to the variety’s breeding has no effect on the seed rate.”

The first hurdle in successful establishment is seedbed moisture. WOSR seed needs to absorb around 40% of its seed weight in moisture in order for germination to start adds Mr Neale.

“WOSR will remain viable in dry soil provided that the radical has not broken the seed coat. However, the moment the radical breaks through the seed coat there is no going back. Moisture levels in the seedbed must then remain at sufficient levels to take the seedling past fully expanded cotyledons. Any desiccation of the seed or seedling during this period will typically see losses of 80-90%.”

“Post sowing the seed takes around 72 hours to produce the radical when there is sufficient moisture, which there often is immediately post drilling. The issue is always retaining sufficient moisture after the initial 72 hours in the late summer sun and wind.”
“To achieve this, growers should sow deeper into moisture, and trial work has demonstrated that there is flexibility in the first 5cm of sowing depth before any loss of emergence is seen.”

Following on from maintaining seed and seedling moisture, the next aim needs to be minimal soil disturbance as close to the point of sowing as possible, says Mr Neale.
“Seed to soil contact is of critical importance and research again gives us a set of parameters to aim for, if consistent and successful establishment is to be achieved. Grass and broad leaved weed emergence and control are also strongly influenced by the establishment method.”

“Clod size is a key factor in good establishment and the graph below (Figure 2) demonstrates the almost total failure of the crop to establish in dry clay, once clod size passes 17mm. As a guide, that’s the size of the letter keys on a computer keyboard.
“On the back of our black grass control work at Brampton, we have developed and promoted the ‘Cousins Micro-wing’ establishment system. This moves minimal soil to 75mm depth and drops the seed in behind the leg before rolling in.”

“Minimal soil movement techniques like this have raised concerns regarding previous herbicide residues damaging the WOSR seedlings. However, we have seen no issues during the extreme risk year of 2013, where growers had correctly adhered to following crop restrictions,” he adds.

Cultivation influence on pests and disease

Mr Neale adds that while chemical control is frequently the main focus of attention in controlling weeds, pests and disease, the establishment period for WOSR is critical in influencing all of these areas.

“At the time of writing (mid July), WOSR yields are indifferent, with 3-4.6t/ha the current range.”

“The 3t /ha yielding crops tend to be the earlier sown, close rotation situations and verticilium wilt again looks to have taken a toll in these cases, with ‘stubbles dead to the ground’ reported by growers. Later crops, in contrast, have the more normal green stubble once the field is cut.”

“It has been noted in previous years, that earlier sowing in warm soils leaves the crop at risk from verticilium wilt infection during the autumn.”

“Rolling of the crop once sown should be considered vital. Rolling improves seed to soil contact, helps retain moisture and reduces grazing by slugs and Cabbage Stem Flea Beetles. In both cases, there is likely a high mortality rate in these pests simply by the crushing motion of the Cambridge rolls.”

“Consolidated soil also restricts movement for the pests and induces more surface dwelling, where birds and ground beetles can predate them.”