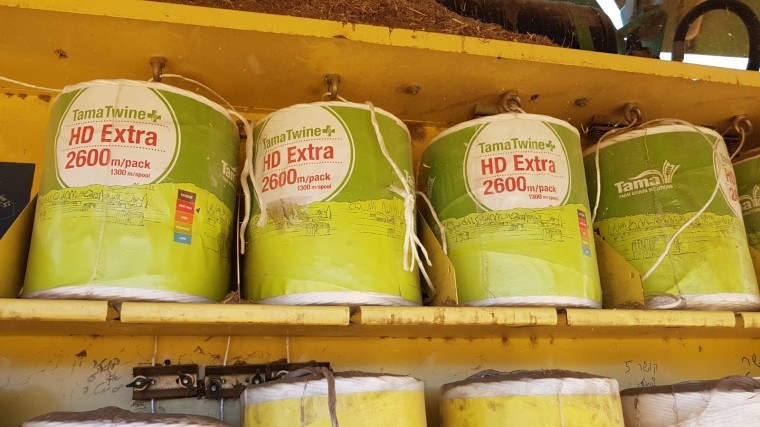 “This summer’s hot, dry weather and short brittle straw means balers are having to work at higher densities to achieve bale weights, so stronger twine is clearly needed,” says baling expert Graham Robson. “Many farmers and contractors are already making the switch.”

Choosing the right twine is easier thanks to the colour-coded segment range found on new-generation twine from Tama and most major baler makers – including Case IH, John Deere, Massey Ferguson, Fendt and New Holland.

The colour segment range helps users match twine to baler type, crop and, most importantly, baling conditions, with blue suiting the least demanding conditions, through green, orange and red to brown for the most extreme.

“UK farmers and contractors typically use twine with a performance and strength found in the orange segment for baling straw, so simply stepping up to red is the key to achieve expected bale weights when straw is extremely dry and brittle. If you’ve been using red segment twine, look at moving to brown,” he advises.

“This year has shown what we mean by ‘extreme’ conditions. The colour segment scale shows very clearly how easy it is to move ‘up the scale’ to choose a twine of higher performance than normally used – which is shown on all the twine packaging and is followed by almost all the OEMs on their branded packaging,” says Mr Robson.

The new generation twines launched two years ago use new materials and manufacturing processes to produce twine with far greater knotting performance and also achieve much longer spools, able to produce better knots at lower cost per bale. Segmented according to conditions of use, they are easily matched to specific baling situations, with a ‘rainbow’ icon on packs showing the chosen option, just like the eco-ratings on kitchen appliances.

“Too often farmers and contractors are being deceived into using a twine ill-suited to their situation,” says Mr Robson. “They could be producing more bales, more securely, with less down-time and significant cost saving by taking account of the new colour-coding.”

The ratings reflect in-field testing and validation by baler OEMs, in all types of crops and baling conditions around the world, Mr Robson stresses. German firm Rasspe, which make knotting systems for numerous OEM branded balers, has also approved the new colour-coded twines and employs the twine in their knotter set-up procedure during production.

Tama’s orange segment twine, branded LSB Power, gives a guaranteed 2-spool pack length of 2600m, and is the most popular and best performing twine for all crops and balers where high density is required in normal conditions.

For more demanding situations red-coded HD Extra is specially designed for extreme conditions, such as high temperatures and low humidity, and for ‘extra’ high density balers, such as AGCO XD and Krone HDP 1 balers operating in normal conditions.

For the highest density balers working with straw in conditions of extreme density or high temperatures, short straw, or maize stalks, there is brown segment twine, not generally required in UK conditions, but it could be relevant this season.