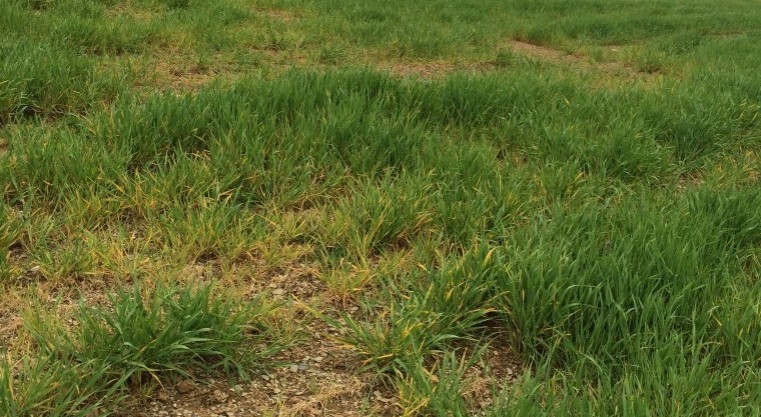 BYDV is the most widely distributed viral disease of all cereals, and generally affects barley and oats to a greater extent than wheat, with early infections holding the potential for significant yield losses. The smaller the plant when infected the greater the impact on yield; winter cereals are generally considered as susceptible up to GS30.

The damage can be accentuated by the speed at which the virus is transmitted between insect and crop – aphids can become infected within 24 hours of feeding and re-infect healthy plants in less than a day.

This autumn sees the last opportunity for UK growers to use noeonicotinoid seed dressings containing the active clothianidin, as the final date of use has been confirmed as 19th December 2018. After the winter of 2018, growers will only have pyrethroids to fall back on until the arrival of new insecticides.

Mr Connabeer points out that 2012 and 2016 were relatively high pressure and notably difficult seasons for BYDV control – all whilst 50% of the wheat crop still had a neonicotinoid seed dressing.

“Looking ahead we are moving into an even more challenging situation as many growers and agronomists will not have experience of managing BYDV without dressed seed, especially in high risk scenarios.”

Without clothianidin, management of BYDV will require careful integration of monitoring, cultural and chemical control methods. It will be necessary to identify potential risk periods, in order to control populations of vector aphids and reduce virus inoculum, but it is unlikely that growers will be able to maintain BYDV levels as low as in the past he notes.

“It’s important to get control correct from the start as if there is suddenly a significant flight of aphids then crops will be at risk – there is no second chance with BYDV.”

“Whilst the latest monitoring by AHDB and Rothamsted suggests aphid activity remains low, with the current mild autumn conditions the threat is high as aphid flights will continue much later than usual – the risk only goes away once aphids stop flying – it’s not controlled by diary date!”

“The grain, bird cherry oat and rose grain aphids can all transmit BYDV so there’s a need to control all of these particularly in mild autumn conditions where aphids keep flying. Issues have been observed from low levels flying into crops late then multiplying in mild autumns and winters leading to significant secondary infection.”

Mr Connabeer recommends that crops sown in high risk areas, and not just the south west and south coast but parts of East Anglia and the west coast, should use Deter or Redigo Deter for early drilled crops.

“This will provide about 6-8 weeks protection when the crop is at its most vulnerable during emergence and establishment.”

“The added benefit of dressed seed is that it is a useful management tool where subsequent treatments may be delayed by the weather.”

Conor Campbell, Hutchinsons agronomist based in Alnwick, urges growers to consider where seed has not been protected to use an aphicide spray, and the message is not to delay treatment when warnings are issued.

“While trials suggest the optimum timing for single sprays is between mid-October and early November, depending on emergence dates, any crops that were through the ground in late September or early October may benefit from an earlier spray.”

“Pyrethroids do still have significant impact on aphid control. We only have resistance recorded in the grain aphid, so it is important to use cultural methods to reduce the risk of BYDV initially.”

“The minute the crop pokes through the ground it is at risk, so it is vital to spray an aphicide onto the crop around the 2 leaf stage – this should provide about 7 days repellant activity – that’s providing the aphids show no sign of resistance.”

After the first application of a pyrethroid then the T-sum calculations begin, or if you have neonicotinoid dressed seed then the calculations begin at the end of the protective period of the insecticide seed dressing, he says.
BYDV spread and optimum spray timing depend on a T-sum system of accumulated day degrees above 3oC from the date of emergence, he says. If the T-sum reaches 170 degree day this signifies the presence of progeny which can lead to a significant spread of the virus resulting in the traditional circular patches visible later in the season.
“If unsure about risk levels the AHDB Aphid News alert is really useful and worth signing up to. Hutchinsons is also running a series of traps – and in the north these are based at our Alnwick and Carlisle trial sites.”

Both agronomists agree that a focus on improving crop rooting and vigour through nutrition and disease control to boost growth quickly past the most susceptible stage, since aphids are attracted to yellow crops, and this is also true of crops affected by herbicides.