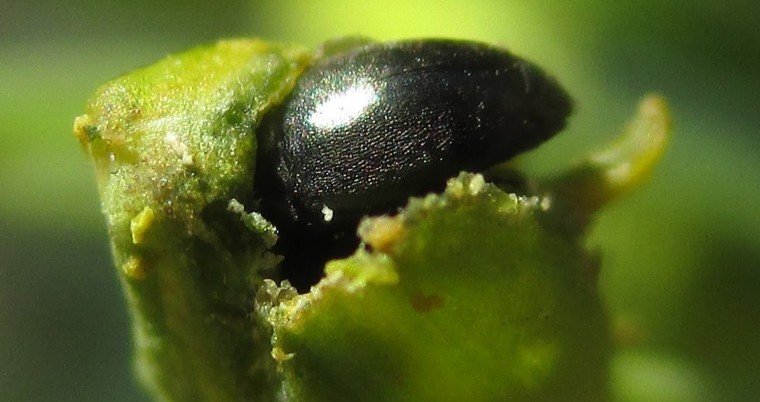 A fortnight of cold weather and wet soils has turned what looked like being an incredibly early and forward OSR season, into something more average, at best. And the slow development from green bud to flowering could leave crops exposed to Pollen Beetle damage for a prolonged period this season, warns Pete Saunders of Syngenta.

“Pollen Beetle have been on the move during warmer day temperatures, but the cold nights have kept the crop development in check,” he commented. “As temperatures warm up oilseed rape plants are at risk of increased Pollen Beetle feeding activity throughout the green bud stage, as the adults burrow into flower buds in search of pollen food sources.

“Every bud bitten into is a pod lost,” he pointed out. “Growers are advised to assess the potential of their crop and its ability to flower bud withstand losses and treat with Plenum accordingly.”

Oilseed rape crops at relatively low plant populations can withstand greater Pollen Beetle feeding damage, and still produce sufficient side branching and secondary flowers to compensate for the early losses. However, Pete points out growers should be aware that this could still have an impact on the evenness of pod and seed maturity at harvest.

“The current Pollen Beetle treatment thresholds indicate it is the thick crops and higher plant counts that are most susceptible to damage, since they have less capability to compensate with side branches.

“Growers are advised to monitor and target these crops as a priority, when Pollen Beetle numbers are on the rise,” he advocated. Many crops were established at significantly higher seed rates this season in an attempt to mitigate Flea Beetle losses in the autumn, and have established with high plant counts at greater risk.

Pete advocated that when growers or agronomists do decide to treat, in most instances the best option is to use Plenum as the first course of action. “Monitoring of Plenum Beetle populations by Syngenta and independent sources has identified resistance to pyrethroids is extensive across key arable areas of the UK.”

He advises all pyrethroids should be avoided where resistance is suspected, and with both KDR and metabolic resistance now identified in pollen beetles across Europe, alternative modes of action must be used for pollen beetle control where there is evidence of resistance

“Given the importance of the control timing and typically limited spray windows, at an incredibly busy time of year for the sprayer, it makes sense to go straight for a resistance busting Plenum application for effective control and to protect the crop through to flowering.”

Plenum quickly stops treated beetles from feeding and causing further damage, although they main remain in the flower heads for several days before dying. There is no known insecticide resistance to pymetrozine.

Esssex oilseed rape grower, John Haynes, treated 50 hectares of his crop that was assessed as at risk from Pollen Beetle last year. He believed that where crops are at risk of economic damage, it is a better agronomic decision to go straight in with a resistance busting option.

Trying to control Pollen Beetle with an initial pyrethroid spray, and then switching to another active when it doesn’t work is likely to increase pyrethroid resistance issues, warned John, especially when the sprays are being used extensively in an effort to minimise Flea Beetle attacks.

Pete Saunders adds that Plenum application should only be made whilst crops are at the green bud stage; once fields come into flower the Pollen Beetle moves to feeding on the open petals, with little or no further damage to remaining unopened buds.