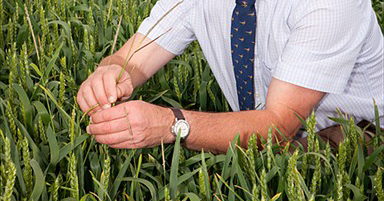 It is an accepted fact that you are going to get better black-grass control from a spring crop over an autumn crop however it is important to look at which crop you are going to grow and how – with a focus on bringing down the black-grass population, says technical services leader Matt Ward.

For many growers spring barley is not an option due to logistics such as limitations on crop storage, so in this case spring wheat will suffice, but for those that can be flexible spring barley stacks up so much better than spring wheat.
“Although you are getting some good control from a spring wheat crop as the black-grass plants are smaller and have less tillers, this can be reduced by as much as a half again with a spring barley crop, and it’s always a better option than a second wheat and without the risk of getting it wrong,” he says.

When deciding which strategy to adopt for controlling black-grass Mr Ward advises against using the gross margin of the crop to make the decision about which spring crop to grow.

“This is flawed system as it does not take into account cash flow, additional field operations and cultivation costs or fixed costs. Nor does it take into account the risk of the crop not being viable and needing to be sprayed off.”

“When the cost benefits of the reduced black-grass are calculated, using data based upon work from Rothamsted Research, it’s clear that the ‘real’ margin from spring barley far outweighs that of spring wheat, and is substantially higher than that of a second wheat.”

Mr Ward points out that while delayed drilling can reduce black-grass by as much as 31% on average, he is keen to highlight that there is a big variation around the average. “If for example, you have delayed drilling until the end of October and it’s a dry year, the black-grass may not have germinated yet. In a wet autumn, the black-grass will have come up earlier but then you are likely to be drilling into poor quality, heavy and wet seedbeds.”

“When you compare this against the 78-94% reduction you can get from spring cropping, it’s clear to see spring cropping has the most impact on reducing the black-grass numbers.”

Leaving a field fallow for one season is not going to have a significant effect on black-grass numbers, he continues. “The data is compelling; it shows that at least 18 months is needed to reduce black-grass numbers significantly, or that you should follow a fallow break with a spring crop.”

“The worst thing you can do is to leave a field fallow and then – come October and good conditions – feel the pressure to drill wheat. These are perfect conditions not just for the wheat – but for black-grass too!.”

He advises thinking very carefully about the following crop, and would encourage growers to plan for a double break crop. “If you follow the barley with OSR, there will still be some black-grass in the OSR which then seeds itself, and you are back to high plant numbers again in the following wheat crop – and then it’s all been for nothing.”

“A competitive crop allows for better herbicide activity, without the crop it’s a numbers game, you get the same number of plants but with 2 or 3 times the tillers with bigger heads.”

Seed rates are an important tool in making the crop as competitive as possible, and the best way of getting this correct is to use precision farming which allows for the most appropriate seed rate for specific soil conditions and the black-grass burden in specific areas of the field.

“We have found that establishment rates on heavy land in the spring can be less than 60% in some areas but in the lighter and kinder areas of the same field it might be as high as 90%.”

“From our work at Brampton and our Millthorpe heavier land site, using Omnia Precision, we have found that the standard 350 seeds/m² is insufficient for the crop to be competitive particularly on heavy land. Raising the seed rate to 450 seeds/m² has a good effect on reducing numbers on light – medium soils, but on heavy soils this needs to go up again to 550 seeds/m² for black-grass seed return to remain low.”

Fundamentally, there is not one solution to controlling black-grass numbers, it’s about an integrated approach looking at the effect of each activity in bringing the seed bed burden down, that works on your farm, he says.