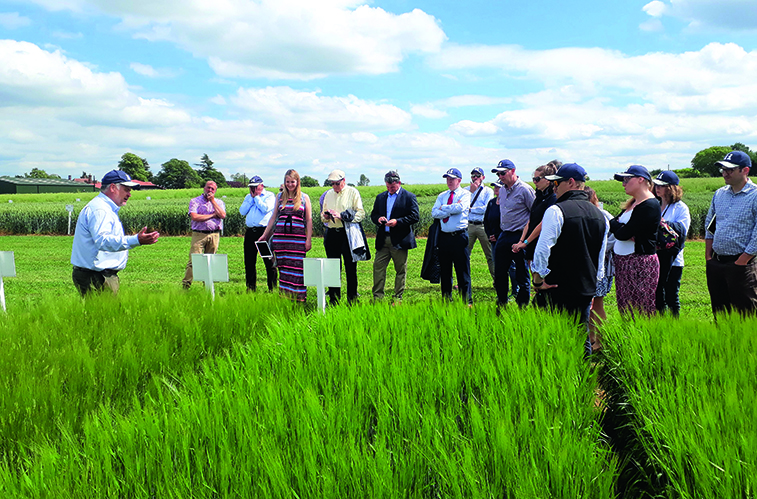 Run by Agrii in conjunction with Glencore Agriculture, the event brought together more than 40 senior representatives from the milling, malting, food supply and processing industries with leading university and institute researchers to explore some of the most exciting industry opportunities and developments.
Significant improvements in the nutritional quality of wheat starch were reported in a BBSRC-supported joint project by the Quadram Institute and the John Innes Centre.

“Given the dominance of wheat in modern diets, introducing this trait into high performance varieties by conventional breeding will be an extremely valuable weapon in the battle against obesity and other diet-related illness.”

Every bit as promising in human health terms were the food opportunities identified for the UK’s other principal cereal by the International Barley Hub at the James Hutton Institute (JHI).

“Even though it’s grown almost exclusively for malting or animal feed in the UK these days, in the ancient world barley was more important than wheat as a food,” observed Dr Bill Thomas of JHI. “And around seven million tonnes are still grown for food globally.

“It is particularly valuable for its insoluble beta-glucan fibre content which studies have shown can significantly lower the glycemic index of breads, improving insulin sensitivity and reducing the risk of type 2 diabetes.
“We see barley as a valuable alternative to wheat and rice – and quite possibly also oats – in these respects. Alongside increasing beta-glucan levels through breeding, we are working to boost their content of a number of bioactive compounds offering additional health benefits.”

The latest generation of promising naked barleys with their higher insoluble fibre levels as well as waxy types with added food processing advantages are currently being tested against the best of UK malting varieties in a special Agrii field screening programme.

“In 2017 the top-performing naked barley in our work fell short of the highest-yielding malting variety by 14%,” said head of agronomy, Colin Lloyd. “But its specific weight was vastly better. We have high hopes for the new generation of varieties in our current trials.

“Like the Explorer malting barley we have successfully developed for Budweiser, the value is as much in the functionality of the grain as yield. “From a trial 450 tonnes in 2013, we had growers contracted to produce 85,000 t of the variety for AB InBev last season, successfully replacing malt supplies that were previously all imported.

“With their clear health benefits, naked barleys offer an even greater opportunity for British growers. Also offering real potential for the future are the range of novel and value-added wheats we are developing with our breeding partners; the promising soyabean varieties and growing systems we are evaluating; and the pioneering grower contracts we have introduced for enhanced digestibility animal feed beans in partnership with Waitrose.”

“Rather than relying on traditional grain and oilseed production, we need to think differently and far more broadly as we move into an increasingly uncertain food production future in the UK,” stressed Agrii market development manager, Peter Smith.

“The opportunities we have to add value to consumers, processors and growers alike are vast. But only if all parts of the supply chain from research to retail work together to identify the most promising avenues, harness the available genetic and agronomic resources, and develop the varieties and growing systems that make the most of them.

“This is where our unique national research and development network really scores, moving cutting edge food science as rapidly and effectively as possible from the laboratory bench to commercial production in the field.”