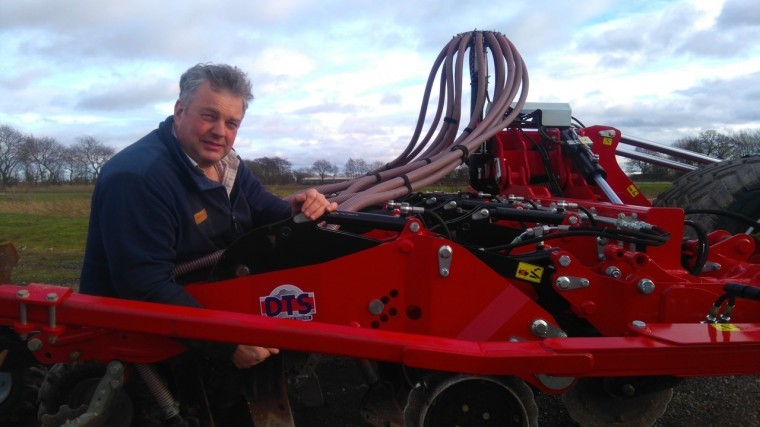 The restored hybrid is officially recommended for east/west regions, but Openfield’s Lee Bennett says evidence suggests it suits almost any location, soil type or drilling slot. Indeed, Aquila was the top variety at the Croft variety trials near Darlington last year and many crops in northern England and Scotland have performed as well as further south, he says.

Richard Wainwright, who farms 510ha on the edge of the North Yorkshire Moors, is growing Aquila for the second time after last year’s crop, direct drilled after wheat, yielded an impressive 5t/ha.

“It went in later than usual, but still established well. We’re only sowing 30 seeds/sq m, targeting 15-17 plants/sq m in March, so crops can look a bit thin at first. But once we got to the end of March, it grew and branched out amazingly and yielded 5t/ha.”

This season’s 30ha, which was direct drilled after winter barley on 19th August, has again gone into a challenging situation as the field is surrounded by woodland on three sides, resulting in significant pigeon pressure. Despite this, and difficult weather earlier in the year, the crop is doing well, he says. “It showed good autumn vigour and really got going once we reached mid-April.”

“It’s got really good disease ratings and we’ve never felt it’s let itself down due todisease. Pod shatter resistance is another good attribute to have.”

Mr Wainwright adds: “There is a myriad of varieties coming through the breeding system, promising all sorts of things. I’m looking for a ‘keeper’ and on the evidence of last year and this year’s crop so far, Aquila looks to fit that bill. We’ll see how it yields, but at this stage I’ll certainly grow it again next year.”

Aquila stands out from others

Aquila’s autumn and spring vigour has similarly impressed Lincolnshire farmer Daniel King, who has 80ha (200 acres) of his 280ha (700 acres) of oilseed rape down to the variety, at Pasture Hill Farm, Edenham near Bourne.

“It’s our first year growing Aquila and so far it looks far superior to anything else, which includes Extrovert and Campus. It established really well in the autumn, and sprang out of the blocks quickly in the spring when other varieties seemed to struggle to get going in cold, wet conditions.”

“We’ve never had an issue with Extrovert in the past, but it doesn’t look a patch on the Aquila, while Campus also looks poor.”

“We’re surrounded by woodland which means there’s a lot of pressure from pigeons and deer, so crops have to get away quickly,” Mr King says. “Last year was also the worst we’ve seen for flea beetle activity, but thankfully crops grew away before there was much damage.”

Aquila’s strong disease resistance – particularly to phoma (rated 8) and light leaf spot (6) is another important attribute, as it gives some flexibility around spray timings, he adds.

“We treat all varieties the same with a robust programme of two autumn and two spring fungicides, but having a variety with a good disease profile does buy time if we can’t get on to spray.”

Mr King says Aquila is likely to be the dominant rape variety sown this autumn, given it’s performance so far, although he will retain a mix of varieties to spread risk.

Lee Bennett acknowledges that sowing vigorous varieties early can sometimes increase the risk of producing over-thick canopies that are at greater lodging risk, but insists Aquila is a good option in early drilling slots due to its stiff stems.

“It’s true slot is the mainstream sowing window, starting in the third week of August – that’s where it really shines. But it works well grown early or late.”