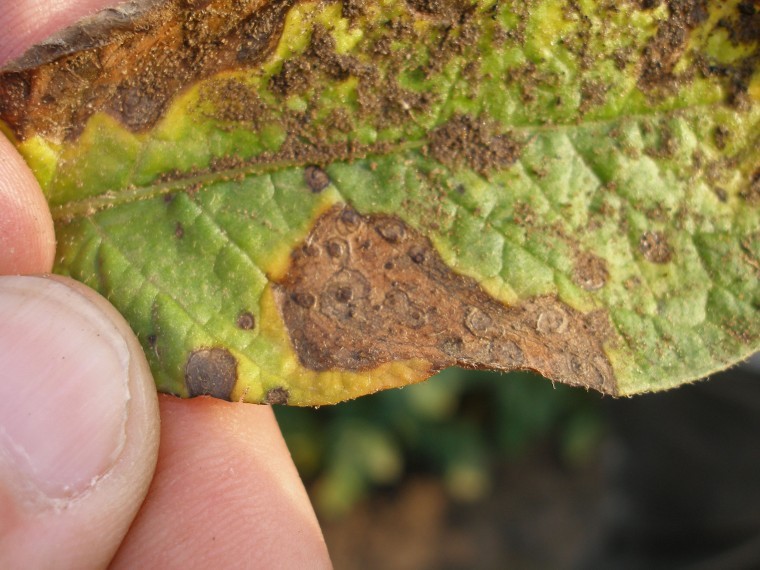 Wimbledon fortnight typically sees the start of Alternaria spray programmes, with growers and agronomists urged to be on the lookout for first signs of infection, reported Syngenta field technical manager, Michael Tait.

“Crops have been under intense heat stress for several weeks and, even with full irrigation programmes, under some degree of moisture stress – which is acknowledged as a pre-cursor for Alternaria infection,” he warned.

“The good news is that the dry conditions have been less conducive for the disease, but wherever the heat triggers flash storms, or there’s a heavy application of water, it creates a microclimate for the pathogen to flourish.”

With the late planting season along with the current check in potato plant growth when temperatures reach over 30°C, growers will need to maintain green leaf area for as long as possible for the crop to bulk up, advocated Mr Tait. “Early leaf loss from Alternaria infection will reduce the plants’ ability to generate yield, particularly when there is now little opportunity for compensatory growth.”

Predictions of potato shortages – including front page news headlines of threats to UK crisp supplies – could strengthen prices for free-trade processing crops, which reinforces the need to protect potential yield this season.

This season Syngenta is continuing to support Alternaria monitoring with NIAB, from tissue samples of infection sources sent in by agronomists and growers from across the UK. Previous years’ of assessment has repeatedly identified the early onset of Alternaria alternata, followed by later infection of A. solani.

“A better understanding of how the pathogen develops can help with treatment timing and selection,” advised Mr Tait. There is some evidence that early small leaf spots from A. alternata could create leaf damage and entry points for later A. solani – which typically causes far larger lesions and rapid leaf necrosis.

When putting together a fungicide programme that would suggest starting with Amphore Plus that gives strong activity on both Alternaria strains, and then utilising Amistar later in the season to target A. solani.

”At this stage of the season blight still remains an absolute priority for growers, particularly since any infection from the exceptional early-season high pressure could easily bubble up with any rain,” he pointed out. “Amphore Plus contains the strong leaf blight protection mandipropamid, in easy to use co-formulation with a high rate of difenoconazole for Alternaria protection.”

Mr Tait added that in blight trials at the independent Eurofins site last year, there was a clear beneficial physiological effect of green leaf retention from Amistar applications later in the season, which could prove a useful boost from the Alternaria programme this year too, he suggests.