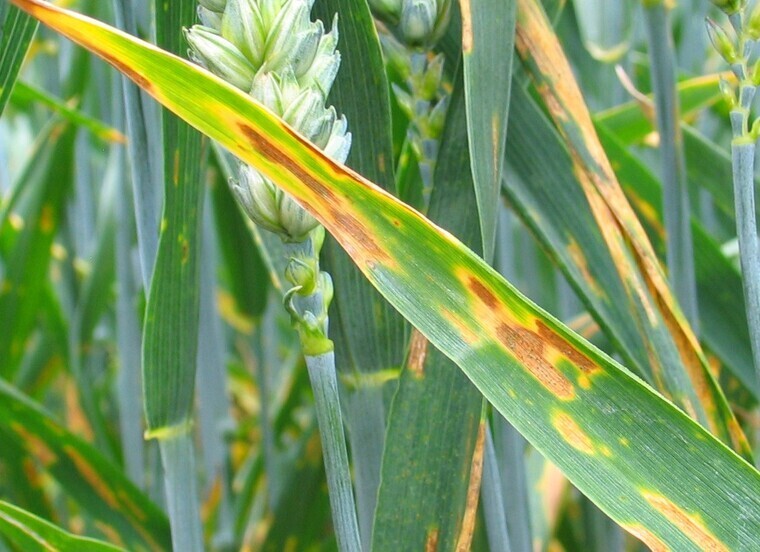 The risk from both diseases is relatively high following a milder than average winter and a significant area of crops sown early into good conditions last autumn, the firm’s technical development director, Dr David Ellerton says.

“Overall, there are plenty of good, lush, early-sown wheat crops around, which will potentially be at higher risk of disease given the right conditions.”

While cold weather and frosts will slow disease development, conditions can quickly change and allow disease to build, as was clearly evident with Septoria in some crops last season, he notes.

Indeed, Hutchinsons head of integrated crop management, David Howard recognises there is a reasonable level of inoculum on older leaves in many crops, which could develop quickly and spread to new growth if conditions turn warmer and wetter in coming weeks.

“Temperatures have been milder than average since last September, and although it’s not been particularly wet, especially in January, there has been enough moisture to keep disease ticking over on lower leaves.”

He recommends growers assess disease risk for individual fields to help plan fungicide programmes, prioritise those fields/varieties to treat first, and identify crops where there may be scope for greater flexibility on timing, product choice or rate.

The Omnia wheat disease risk forecasting model is a valuable tool to help growers and agronomists do this, by providing a baseline risk assessment for any location, based on factors including; variety Recommended List scores, drilling date and historic/ forecast weather data from the Omnia Climate module.

“This gives growers a visual representation of where the main risks are so they can strategically plan control programmes accordingly,” Mr Howard says.

It is particularly useful for those with large crop areas to manage, where there can be a temptation to treat everything as one, he notes. Combining it with Omnia’s crop development model, allows growers to predict when individual crops will reach specific growth stages and plan spray timings accordingly.

Early treatment is paramount for yellow rust control, so this should be the main focus of the first fungicide spray, which is usually applied to winter wheat around growth stage 25-30, Dr Ellerton says.

“If you’ve got yellow rust, it’s important to knock it out early with a tebuconazole or metconazole-based fungicide.”

Including a strobilurin such as azoxystrobin or pyraclostrobin, can bring extra persistence, however strobilurins should not be used alone, as resistance management guidelines require them to be mixed with a fungicide with a different mode of action, he advises.

Prioritise susceptible varieties rated 3 or 4, such as Skyfall, KWS Kinetic, KWS Zyatt or RGT Wolverine, which were hit particularly hard by yellow rust last year, but will give greatest yield response to treatment, he says.

Those with higher Recommended List ratings cannot be ignored though, especially if it is based on adult resistance, which may not kick-in until late in the season, Dr Ellerton adds. “If disease establishes early, it can cause significant damage before adult resistance takes effect, so needs controlling.”

Yellow rust may be the focus of the first fungicide treatment, however this early spray can also be used to boost Septoria protection in high-risk crops and reduce pressure on later GS 32 (T1) and flag leaf (T2) treatments.

This will be particularly important for early-sown wheat, which is inherently at greater Septoria risk, says Mr Howard.

“Drilling date makes a huge difference to disease risk, especially for varieties with medium RL scores for Septoria resistance (i.e. rated 5-6), sown around the end of September and early October. These make decisions challenging as they can neither be approached as a resistant variety or a susceptible variety and so other risk factors become highly important.”

Earlier drilling for one of these varieties can knock a full point off its resistance score, he continues.

“Temperatures change quite a lot at that time of year, so a week to 10 days variation in drilling date makes a big difference to the speed of disease movement and risk going into spring.”

Following the withdrawal of multi-site chlorothalonil, which was the go-to option, folpet is now the main fungicide for Septoria protection where risk is high. “But remember, the focus isn’t on curing Septoria that appeared on lower leaves over winter, it’s about protecting upper leaves as they emerge.”

He therefore suggests it may be worth holding back folpet for the T1 and T2, and building plant protection in other ways, such as with the biostimulant Scyon. Its combination of naturally-occurring signalling metabolites strengthens the plant’s natural defences and maximises nutrient uptake, making plants healthier and better able to fight off disease.

“If you’ve got a high-risk variety for Septoria, consider Scyon at T0 to build protection. Improving nutrient uptake is always beneficial, especially if growers are looking to apply less nitrogen fertiliser this season.”