What does the future hold for the farmland market? - South East Farmer 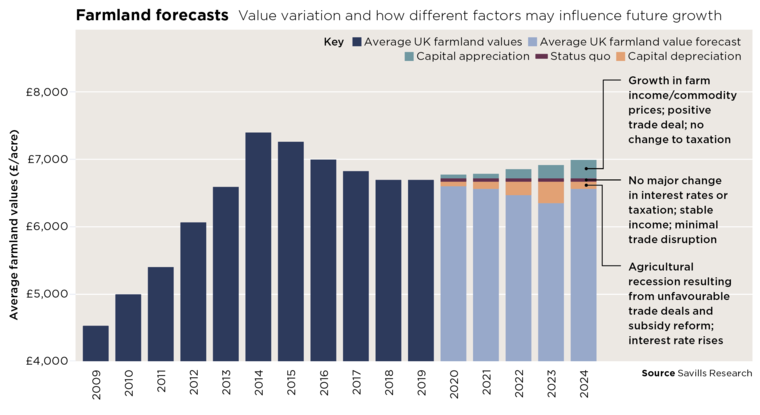 So, where is the market heading? Following the election result, a strong Conservative majority offers continuity in the farm business environment, even if the sector faces a great deal of regulatory change over the coming five years. However, our analysis shows many standard market drivers are having less impact in the current market, as influences to buy, sell or otherwise trend more towards local and personal circumstances.

Savills farmland forecast identifies the major influences which, in combination, could create three possible market scenarios over the next five years; an appreciating market, a static market and a depreciating market. The election of a Conservative government signals a move to freer trade and greater environmental stewardship, but with budgets protected for the duration of the next parliament, landowners and managers may take comfort that policy evolution will be gradual rather than sudden. Savills predicts that the broader economy is more likely to perform positively in the next five years, at least once the first Brexit hurdle is passed. Therefore, we expect the capital appreciation scenario will prevail for land, with local factors remaining the predominant influence on land values.

With regulatory uncertainty expected to ease over the short to medium term, landowners will be reassessing business options. The likely restructuring of agricultural payments is expected to put pressure on returns from pure farming and force the hand of those who are unable or unwilling to invest or restructure. This is expected to result in a variety of land types coming to market. The prevailing low cost of funds and a volatile global trade market may also attract a greater number of buyers, providing other investment objectives are met. The current weaker pound boosts this sentiment towards inward investment.

Chris Spofforth, director, Savills farm agency in the South East, said: “A trend that is likely to continue is the disconnect between productive capacity and farmland values. Many factors influence this dynamic, including diversification of farm incomes, expectation of planning gain, buyer sentiment and demand from non-farming buyers, all to varying degrees. In the South East, we continue to see strong demand for residential and amenity farms, along with ventures that have potential for a variety of income streams. Commercial farms that are best in class are also sought after but for those farms needing investment or those of poorer quality without the scope to diversify, interest has weakened and that’s likely to continue.
“We expect farmland to continue its long term growth, low volatility and negative correlation to other conventional assets, meaning land values generally rise as these asset class values fall. While values have fallen back over the past five years, the stability of capital has increased average values by 20% (in real terms) over the past decade. The predictable market drivers are arguably softer in today’s market but, the fundamentals still remain strong; competing land uses and the ever increasing demand for food, fibre and fuel.”